Scan the ingredients of your wholewheat pasta and you’ll only see wholewheat flour. Do the same for your wholemeal bread and there are sometimes up to four flours listed.

That’s even though regulations state that the name ‘wholemeal’ can only be used on bread if all the flour used in preparation is wholemeal.

We compared the ingredients of 11 wholemeal loaves, including the big four supermarket own-brands and leading brands Allinson, Hovis and Warburtons.

That’s even though regulations state that the name ‘wholemeal’ can only be used on bread if all the flour used as an ingredient in preparation is wholemeal. Hovis told us that its loaf complies with the regulation, and that the wheat flour is being used as a carrier or bulking agent, not as a ‘flour ingredient’. And that ‘soya is classified as a legume, not a cereal, so again would be outside of the scope of the regulation’.

Soya flour is apparently added to give bread better volume and crumb softness.

Allied Bakeries, the makers of Allinson’s and Kingsmill, told us: ‘We use fermented wheat flour in our Allinson’s Classic Wholemeal loaf for flavour and to help the loaf remain fresh for as long as possible.’

In both of these cases the manufacturers claim that the non-wholemeal flours are not used as an ‘ingredient’ but fulfil another purpose, such as texture or to maintain freshness. 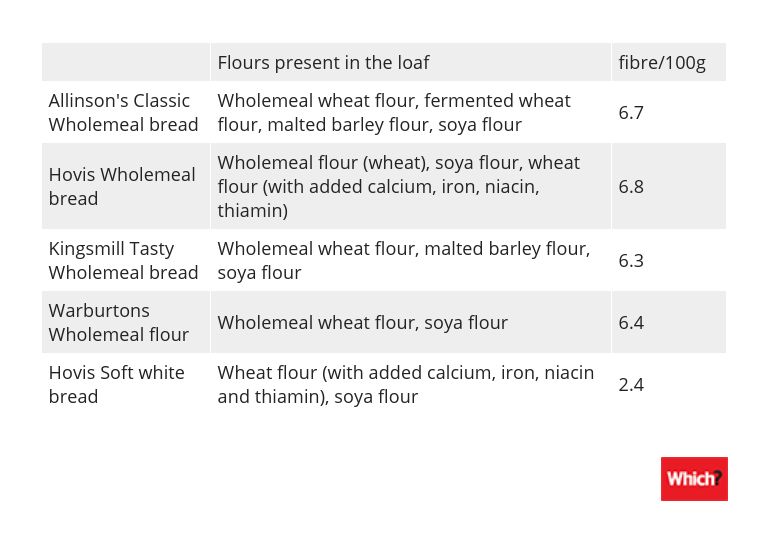 Our findings mirror those found by Sustain’s Real Bread Campaign in 2013.

Real Bread Campaign co-ordinator Chris Young said: ‘There is no place for white flour, soya flour or linseed oil in a wholemeal loaf. This latest study highlights that we still need what we call an Honest Crust Act of improved and properly-enforced loaf labelling and marketing legislation to protect people from being misled’.

If you want to know exactly what flour is being used in your bread, you can always make your own. With four ingredients – flour, water, yeast and salt – it’s very straightforward, especially if you use a Best Buy bread maker.

Rest assured though, even with the addition of other flours, a slice of shop-bought wholemeal bread contains around 2.5g fibre per slice, compared with the 1.1g of fibre per slice of white bread, so it’s still a healthy option to choose, especially as recent evidence shows that few of us achieve our daily recommended fibre intake.

While in the UK there is no legal definition for wholemeal, it is generally flour from the entire wheat grain, which contains the bran and the germ.