The Financial Conduct Authority (FCA) is calling for the minimum repayment option on credit cards to be removed.

Behavioural research conducted by the FCA showed that removing the option to repay the minimum amount each month can result in people paying back more of their debt.

The minimum repayment is the least you must repay on your credit card each month to avoid a fine. But repeatedly paying the minimum will take you longer and cost you more in interest.

Below, we explain why minimum repayments should be avoided and explore the FCA research in more detail.

Why the minimum repayment option should be avoided

Unlike other credit products, credit cards do not have fixed monthly repayments. Instead, we get to choose how much to repay each month.

However, there is a legally required minimum repayment and as many as one in four credit card payments in the UK are made at this level.

The minimum repayment amount covers fees and interest and is expressed as a percentage of your balance (typically 1%).

But as the minimum repayment is based on a percentage, the amount you need to repay falls as your debt does – which means it will take you longer and cost you more to pay back what you owe.

On the other hand, making a fixed repayment of £100 a month would take three years and four months and cost a comparatively low £968 in interest.

It’s not always the case that paying back the bare minimum is worse than paying more.

One benefit is that it gives you flexibility for when you’re low on cash.

For those with 0% deals it makes sense to defer payments, as long as you’re able to pay back more once the 0% period ends.

However, the FCA is concerned that people who persistently make the minimum repayment hold onto debt and pay interest for many years, which can have a knock-on effect on both their credit score and their state of mind.

Credit card users can make repayments in two ways: manually whenever they want, or automatically by setting up a direct debit. But in both cases, they must pay a contractual minimum amount.

The FCA says that giving the minimum amount too much prominence can limit the repayment choices we make due to a psychological concept known as ‘anchoring’, which leads us to pay less than we otherwise would.

In its research, the FCA used two experiments – one with the minimum repayment amount showing on a manual payment screen and one without.

It found that removing the minimum repayment amount from the manual repayment screen had a ‘dramatic positive effect’ and increased the value of repayments made by a customer by 20%. 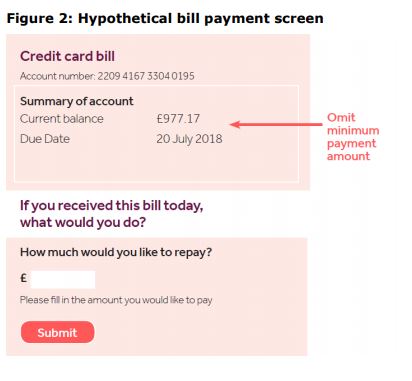 In another test, the FCA removed the option to pay the minimum repayment amount from the direct debit setup screen.

The measure caused more people to choose a higher direct debit amount and a small but significant amount chose to repay in full.

However, the move didn’t increase overall payment amounts, as people chose to offset their higher direct debit payment with lower subsequent manual payments. In some cases, they opted out of setting up a direct debit at all.

The FCA says it wants to scrap the minimum repayment option, which is leading many to take longer to pay off their debt. This could mean the option is given less prominence when you decide how to make your credit card repayments in the future.

The FCA said: ‘Given the effects we observed during our testing, we are considering consulting on changing our rules and guidance to mandate the removal of the minimum repayment anchor.

‘[This] has the potential to increase consumers’ credit card repayments where they can afford to do so while preserving the flexibility of credit cards, which millions of consumers value.’

But changing the rules is a complex area and the watchdog says it will need to work with providers in the coming months to discuss the findings, the practicalities of implementing them and whether there will be any unintended consequences of making the change.

The research feeds into the work the FCA has already set in motion to help people in persistent credit card debt. Read three ways credit card companies must help you deal with debt to find out more.

Will the stamp duty holiday be extended?

Premium bond winners in March 2021: how many prizes do you need to win to beat inflation?