Halogen light bulbs will soon be a thing of the past, as the final phase of EU energy regulations comes into effect on 1 September 2018, banning them from sale.

Halogen GU10 spotlights have already been banned – in 2016 – but halogen bulbs got a stay of execution as manufacturers argued that LEDs weren’t yet a viable replacement due to higher upfront costs, particularly for the brighter 60-100W-equivalent bulbs.

That’s set to change, as the ban on importing or producing new halogen bulbs comes into force on 1 September.

Consumers in the dark about upcoming bulb ban

It seems that the message hasn’t yet reached those affected, though. An international consumer survey commissioned by LED bulb manufacturer Ledvance found that 64% of UK consumers were unaware of the impending ban, and a further 10% were aware but unsure of how it would affect them.

Read on to find out more about the ban and what it means for you. Alternatively, skip straight to our independent light bulb reviews for the best EU-compliant alternatives.

Why are halogen light bulbs being banned?

This is the final stage of a European Union directive (EC 244/2009) that has progressively banned less efficient light sources, with the aim of improving energy efficiency and cutting carbon emissions across the EU, starting with traditional incandescent light bulbs in 2009.

The directive is part of an ambitious Ecodesign project to improve energy efficiency across a range of domestic appliances from light bulbs to washing machines.

Halogen light bulbs fall foul of the regulations as they use much more energy than alternatives such as LEDs or compact fluorescent (CFL) bulbs. They also have a relatively short lifespan of around 2,000 hours – approximately two years when used for around three hours per day.

Halogen bulb ban: what it means for you

The ban includes the classic-style halogen bulbs (known as ‘non-directional’ bulbs) which are made of glass, are operated without a transformer, and emit light in all directions.

Cap types affected include the standard fitting E27 edison screw (ES) or B22 bayonet bulbs (BC) – the most common type in UK households, and the smaller E14 (SES) and B15 (SBC) types.

After the ban comes into effect you are likely to still be able to buy halogen bulbs for a while yet, because retailers are still permitted to sell through any existing stock. For example, we’ve noticed halogen GU10 spotlights are still readily available in some major retailers several years after the ban on that type bulb came into effect. However, some retailers, such as Ikea, have already implemented their own ban on halogen bulbs, opting to stock only more efficient LEDs instead.

Some specialist bulbs, where LED or other energy-efficient alternatives are not available or viable, are exempt from the ban. These include G4, G9 and R7s bulbs, which are used in some ovens and cooker hoods.

Does Brexit affect the bulb ban?

Not really. These rules remain relevant as for long as the UK follows EU legislation. And, as with other bans such as the one on vacuum cleaners with high-wattage motors, manufacturers have indicated that they are unlikely to continue producing halogen bulbs specifically for the UK market after Brexit.

Are LEDs more expensive than halogens?

They can be initially, but not in the long run. The upfront price of some LED bulbs may still seem steep compared with traditional light bulbs, but prices have been decreasing year-on-year as the technology becomes more commonplace, and LED bulbs will save you money over time by cutting your energy bills, plus they last longer too, so you’ll save on buying replacement bulbs.

Our cheapest Best Buy LED 60W-equivalent bulb costs just £2.49. Brighter 75W and 100W-equivalent LEDs do still tend to be pricier than halogens upfront – usually around £8-£12 – but we have found some great-value options for less than £5.

Halogen light bulbs typically need to be replaced after two years, whereas you can get between 10 and 30 years of use from an LED bulb (based on using it for around three hours per day) depending on the bulb you buy.

Should I replace my halogen bulbs now?

No – you have no obligation to replace your halogen bulbs before they expire. The ban is to stop new stock coming onto the market and doesn’t affect the bulbs you already own. Replacing them one-by-one as necessary will spread out the cost of buying replacement LEDs, too.

However, it’s worth considering switching to LED bulbs as the longer nights begin to bite, especially for lighting that you use frequently. You might be surprised to know that a single 100W incandescent light bulb can cost around £20 per year to run (based on three hours of use per day and electricity prices of 18.75p/kWh), whereas an equivalent LED would be less than £5, so the savings can really add up.

Should I stockpile halogen bulbs ahead of the ban?

There’s no need. Stock is likely to last for a while beyond the ban and, unless you particularly favour halogen bulbs, there are excellent LED alternatives available, including some brilliant cheap LED bulbs.

If you had bad early experiences with LED bulbs, don’t be put off. While early versions tended to be expensive, and sometimes failed to match the warm yellow glow of traditional lighting technologies, the best modern LEDs can be almost indistinguishable from traditional bulbs. In fact, when we surveyed Which? members in 2017, 90% said they were happy with their LED bulbs and the quality of light they produce.

Halogen bulb alternatives: how to buy the best LEDs for your home 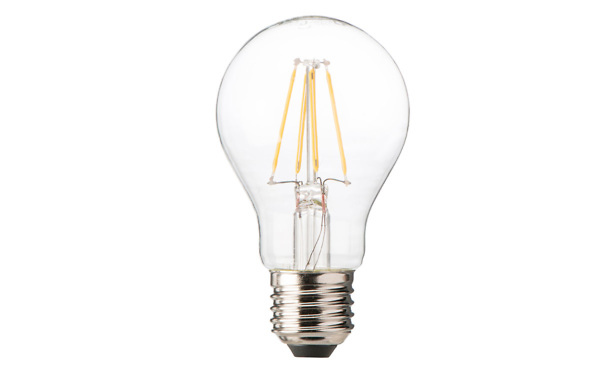 Whether you want to replace the overhead spotlights in your kitchen, the bulbs in your desktop reading lamp, or your main living room lights, here are our top tips for buying replacement bulbs:

There are many cap fitting types to choose from, so make sure you know what you need before you head to the shops. An easy way is to take the old bulb you’re replacing to the store (or a photo of it on your phone) and match it to the packaging.

While you used to just look for a wattage rating, with LEDs comes a new and unfamiliar level of choice and jargon relating to how warm or cool the light output is and how bright it is.

As a quick rule, look for bulbs with a colour temperature rating of 2,700K (Kelvins) – this matches the warm-white glow of traditional bulbs. When it comes to brightness, the higher the lumen output, the brighter the bulb. An output of 1,000+ lumens is roughly equivalent to a 75-100W bulb, and is bright enough for main room light fittings.

See our quick visual guide to light bulb cap types, and get more guidance on colour temperature and lumens in our handy light bulb buying guide.

If you are replacing lights in a dimmer circuit, you may need to upgrade your old dimmer switch to an LED-compatible model. It’s best to replace all the bulbs in a dimmer-controlled fitting at once, such as a light fitting with several spotlights, as otherwise the varying electrical loads can cause problems. See our full guide to fixing common LED installation issues for more advice.

The rise in popularity of LEDs has led to a new wave of light bulb brands clamouring for your business. But not all LEDs are made equal, and poorer-quality bulbs may give out a different colour or less light than claimed, leaving you with patchily lit hallways. We test how well LED bulbs meet their claims in our lab, so head to our LED light bulb reviews to make sure you get the best bulb for your buck.

Smart light bulb reviews – get our verdict on Philips Hue, Hive and more