EuroMillions winners Frances and Patrick Connolly are being impersonated online by scammers who are promising 50 people a chunk of the £115 million jackpot.

The scammers claim they’ll draw the prize when their YouTube channel reaches 10,000 subscribers.

Which? reported the account to Twitter and it was shut down a few days later. But a new account – @MrPatConnolly – was set up and started targeting students promising to help a few with their financial burdens in return for followers.

But the National Lottery has confirmed all the accounts accounts are bogus. 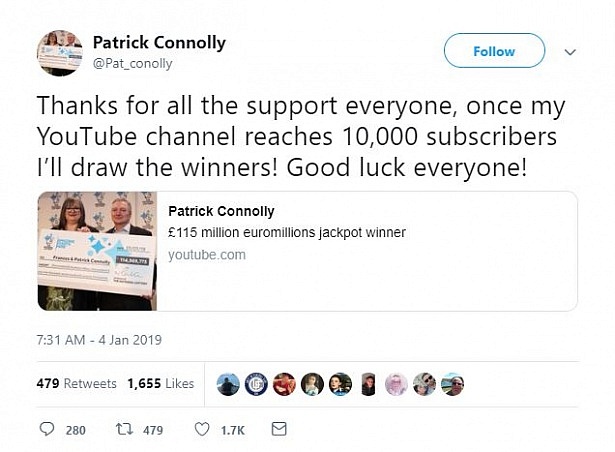 How is this a scam?

It’s not yet clear how gathering 10,000 subscribers on YouTube will eventuate into a scam which might see people lose money or personal information.

But it’s been confirmed these Patrick Connolly accounts are bogus.

Often these impersonations are attempts to make people believe they’re going to be entitled to money.

A Camelot spokesperson said: ‘We would urge people to remember that, if something looks too good to be true, it probably is.’

These accounts were set up on the day Frances and Patrick Connolly were announced as the jackpot winners and have been retweeting other people’s tweets, along with posting their own, to make it appear legitimate. 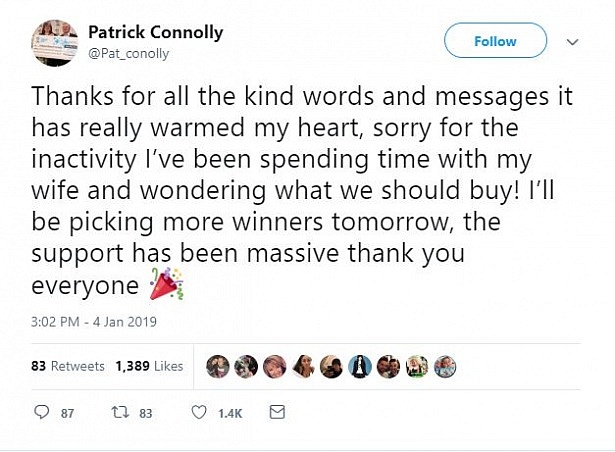 It’s probable these accounts were going to be taken over by someone else once they’ve got a big following.

They could also have been used to ask followers for their personal information – such as email addresses, phone numbers, banking details or PayPal accounts.

While anyone who hands over this information might not immediately suffer a financial loss, they could be added to a ‘sucker list’ which is then sold online so they can be targeted by other scams.

Who are Frances and Patrick Connolly?

Frances and Patrick Connolly are the winners of the £115 million EuroMillions Lottery jackpot which was drawn on New Year’s Day and revealed their identities on January 4.

The BBC reported the couple has drawn up a list of around 50 people who they’d like to share their windfall with, including their three daughters and their grandchildren.

Frances Connolly said: ‘It’s going to be so much fun giving it away.

‘The pleasure for me is going to be seeing people’s faces.’

How to spot a social media scam

The most important thing to remember is that if something seems too good to be true, it probably is.

Especially if you’ve been contacted out of the blue.

But there are other ways you can stay one step ahead of the scammers – including checking URLS or Twitter handles, looking for a sudden influx of posts on someone’s timeline and contacting the company directly.

Read more: how to spot a social media scam