With modified and supposedly made-safe Whirlpool fire-risk dryers continuing to cause fires in people’s homes, the regulator existing to protect consumers from unsafe products has failed to take decisive action to deal with the problem of dangerous dryers.

11 months after beginning its review into the potential risk posed by repaired Whirlpool tumble dryers, the Office of Product Safety and Standards (OPSS) has concluded that the risk to consumers is low.

This is despite Which? continuing to provide the OPSS with evidence of repaired dryers causing fires.

But in its report into Whirlpool, the government department has confirmed that it’s instructed Whirlpool to improve the way it manages risk and the way it communicates with its customers.

Jemma and Jay Spurr from Hampshire told us in November 2018 about the fire their Hotpoint dryer caused in September 2018. It had been modified in October 2016, but just two years later, a fire starting in the dryer ruined their garage, destroying everything in it.

Smoke damage to Jay and Jemma’s home forced them to move into a hotel. Jemma told us she was first alerted when she smelled burning and saw flames and thick black smoke billowing from her dryer.

Jemma said: ‘I grabbed my son and baby daughter and got out as quickly as she could.’

The fire was so intense it took 90 minutes for the Fire Brigade to put it out. 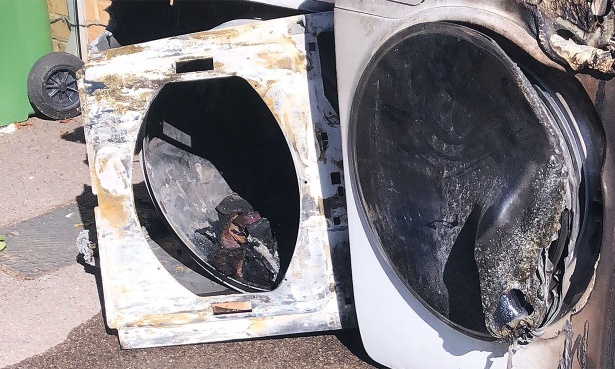 The Spurrs’ fridge-freezer and washing machine were also destroyed in the blaze along with gym equipment stored in their garage.

It took five months – and a report from Hants Fire and Rescue citing the dryer as the cause of their fire – for loss adjusters to contact Jemma and Jay to say that Whirlpool is prepared to consider their claim, ‘in the best possible terms.’

Jemma and Jay are not alone in facing safety problems with their repaired Whirlpool dryer.

In February 2019 we reported on more than 30 owners who have said that their ‘fixed’ tumble dryers have caught fire, produced smoke or the smell of burning.

We passed details of these cases onto the OPSS know about these cases. Since then we’ve heard from more owners in the same position.

Caroline Normand, Which? director of advocacy, said: ‘This review is fundamentally flawed and appears to favour Whirlpool’s interest over people’s safety.

‘It sends the alarming message that companies failing to deal with potentially dangerous products will not be made to take responsibility.

‘The Office for Product Safety and Standards has failed to take decisive action to end this shocking three-year saga and instead thumbed its nose at the safety of those people who continue to report signs of fire in their modified tumble dryers.

‘We urgently need a strong, independent product safety regulator that will keep people safe. The Business Secretary, Greg Clark, must now step in and show the safety of consumers is the top priority for government, ensuring all machines that pose a risk to people’s safety are immediately removed from their homes.’

Is there a dangerous Whirlpool dryer in your home?

Even though our research has shown that Whirlpool’s repair might not work every time, we’d still recommend you get the fix done. And if you own an unmodified fire-risk dryer, stop using it until you’ve had the modification carried out.

Whirlpool told us in February 2019 that it conservatively estimates there could be 300,000 to 500,000 of these machines still out there unmodified.

Check to see if your tumble dryer is on our list.

Whirlpool told us that it has total confidence in the dryer modification, which has been tested and is supported by UK regulatory bodies. It said it investigates all concerns relating to its products and tells us there have been no reported incidents where the modification has proven to be ineffective.

A spokesman told us Whirlpool hasn’t been able to fully investigate fully due to Which? failing to share essential details and that it questions Which? research methods.

A Whirlpool spokesman went on to say: ‘Nothing matters more to us than people’s safety – anyone who owns an affected appliance should contact us immediately on 0800 151 0905 and have their machine repaired within a week.’