One thing that every car owner fears is the pain of paying a hefty insurance bill. Insurance claims are hardly a blissful experience but some savvy drivers have managed to save themselves a headache, and potentially heaps of money, by using a dash cam.

We surveyed* 2,111 British motorists that have made an insurance claim in the last two years. We found that 20% of these drivers own a dash cam; of these, 18% have used a dash cam as evidence in a claim.

Footage recorded on a dash cam can be submitted directly to your insurer. With the very best models recording clear sound as well, you might be able to capture an admission at the scene of the accident, before the other motorist denies all culpability to their own insurance company.

Read on to find out exactly how dash cams came in handy for insurance claims.

Some dash cams produce blurred footage that will be useless as evidence if you have an accident. Our expert tests reveal the best dash cams.

Can a dash cam help in a claim?

Through submitting footage to their insurers, drivers have been able to prove they were not at fault in insurance disputes, potentially saving them hundreds of pounds and the stress of an ongoing claim. 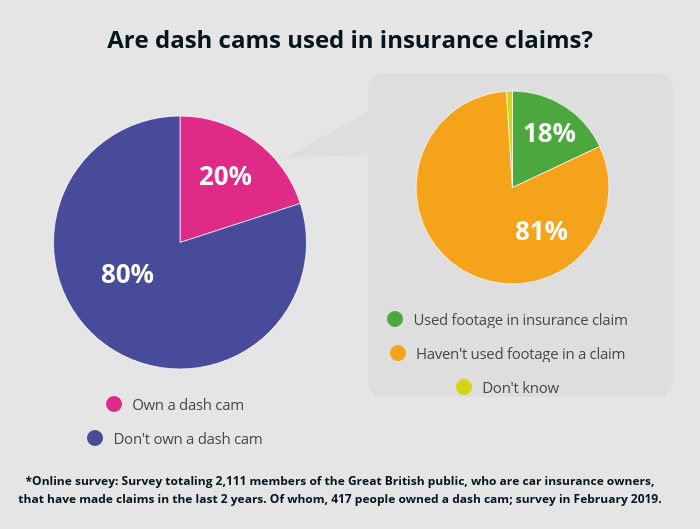 Our research found that 20% of motorists* who have claimed in the last two years own a dash cam. And 18% of these have used a dash cam’s recorded footage as evidence in an insurance claim.

How did a dash cam help drivers to claim?

Here are some of the experiences we got from respondents: 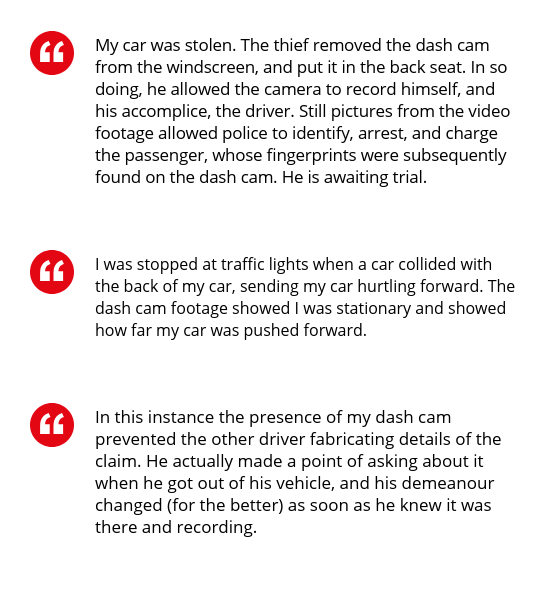 Want to know more about dash cams? See our expert guide on how to buy a dash cam.

Which dash cam should you choose?

Buying a dash cam isn’t as simple as going to a shop or ordering one online, then sticking it to your windscreen. Every dash cam has its own specifications and, most importantly, they come with different recording capabilities.

Having a dash cam that records good quality footage could be the difference between proving your innocence in a claim and losing your excess – or, the unthinkable, footing the bill for repairs.

Our independent tests have uncovered dash cams that are so bad the number plates they recorded were illegible.

We’ve made it much easier to find a dash cam you can rely on. See our top five dash cams for 2019. 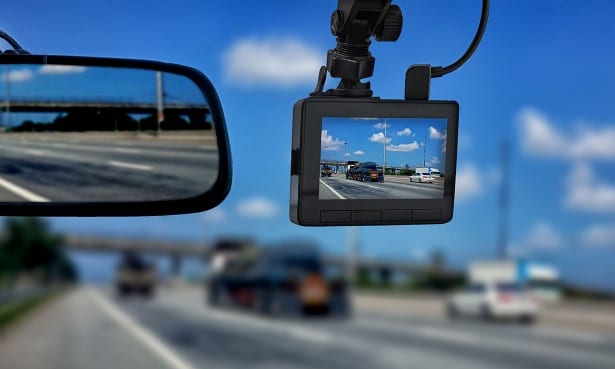 The most important function of a dash cam is how well it records footage.

We test dash cams at varying times during the day and night. This ensures you only buy a dash cam you can trust to record high quality footage should anything go wrong.

But that’s not the only thing we scrutinise. We also test how easy each dash cam is to use – from its set up process, to finding the perfect mounting position in your car, to reviewing the coveted footage you’ve captured.

Despite its main function, many people are unaware that dash cams can have additional features that can strengthen the credibility of footage. GPS data will show your exact location at the time of an incident and wi-fi makes it that much easier to transfer footage.

There are a number of other important features, including some that will protect you while your car is parked. Our research has even revealed where your parked car is most likely to get hit.