Four smoke alarms that are widely available online have recently failed all eight smoke detection tests carried out by Which?. The alarms pose a danger to anyone who owns them and we reveal the characteristics to beware of.

The alarms were purchased from the online marketplaces eBay and Wish for less than a fiver each. But on test and under lab conditions, each of the four alarms failed to detect smoke eight times out of eight during four different test fires. Following pressure from us, almost 200 listings for these dangerous alarms have been removed from the two sites.

To find a smoke alarm with a proven track record of detecting smoke quickly, head straight to our Best Buy smoke alarms.

All four of the alarms that failed to detect smoke in our tests were bought from the online marketplaces eBay and Wish.

Each one was on sale for less than a fiver and all were made in China and sold to us through Chinese re-sellers. They are all equally useless at detecting smoke and we’ve named each product a Don’t Buy. 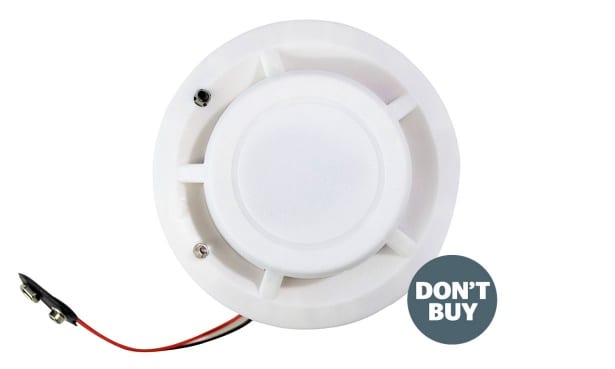 We bought this alarm online from eBay for just £3.88, but it’s widely available from other online marketplaces. It doesn’t have a brand name or model number, but JTY-GD-SA1201W is printed on the box.

In our tests, it failed to detect any smoke at all in all eight of the fire tests we put it through, so it thoroughly deserves to be a Don’t Buy.

When we checked for its availability on eBay recently, we found that it appeared to be identical to 45 of the cheapest 500 smoke alarms being listed on the site. 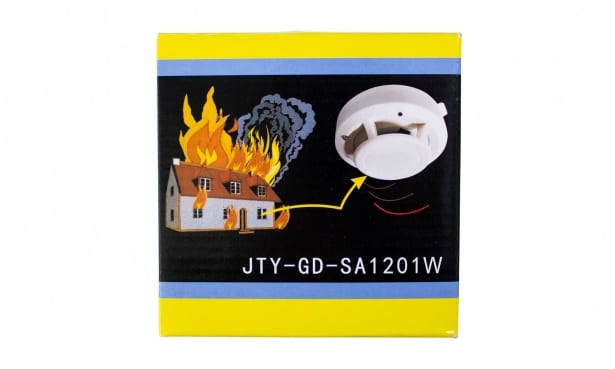 It’s white and circular with five struts supporting the raised central section. The packaging for the models we tested was black with blue and yellow stripes at the top, and an illustration of a burning house on the front. The instructions were just a badly photocopied page of A4. 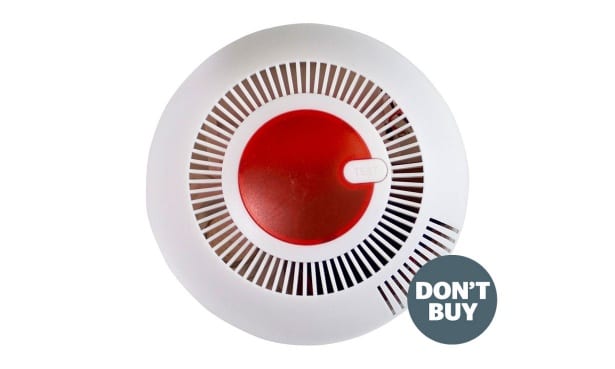 This dangerous smoke alarm is just as bad. Again, it was bought from eBay for just £3.99, and alarms seemingly identical in appearance accounted for 58 of the cheapest 500 listed on the site when we checked recently.

We also found a listing for it on Wish. It failed every one of our smoke detection tests and that’s why it’s a Don’t Buy. 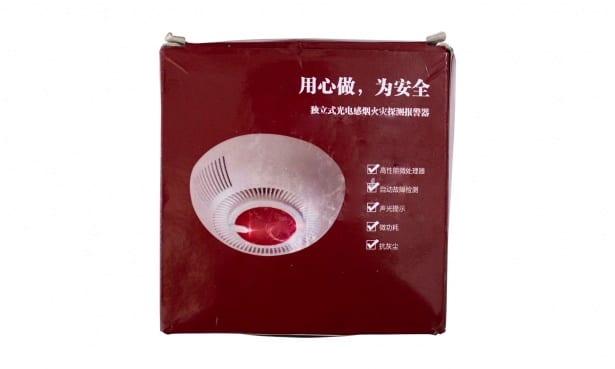 It’s white and circular with a large red circle in the centre surrounded by vents. The box is dark red and all of the markings on the box are in Chinese.

When we tested it, the alarm simply couldn’t detect smoke and would present a clear and present danger to you and your family if there was a fire in your home. 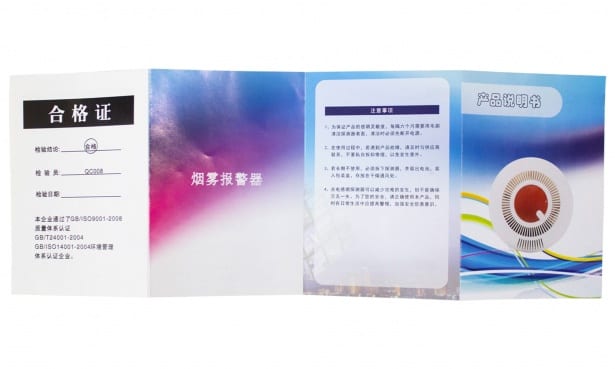 Just like the packaging, the instructions for this alarm aren’t in English and this means that the product can’t lawfully be sold in the UK. 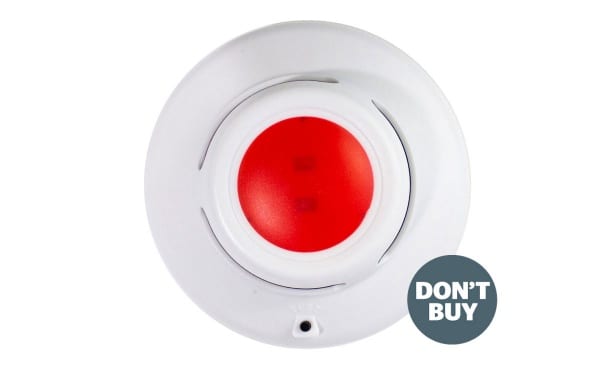 The third of our Don’t Buy alarms was just as bad at detecting smoke as the first two, with it failing to sound in eight separate fire environments. It’s available on online marketplaces – we bought it from Wish for less than a fiver but when we looked, we also found it on eBay. 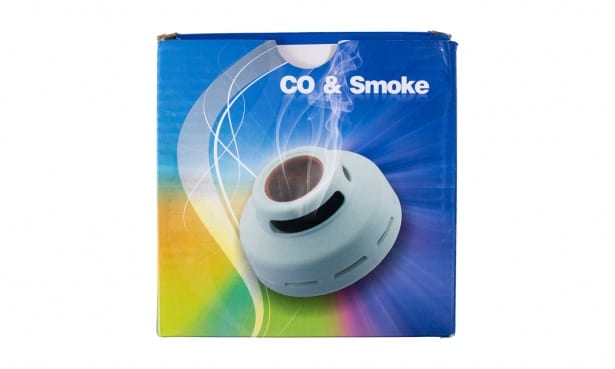 It’s again circular with a red round centrepiece that’s raised up from the alarm’s body. The box is blue, yellow and green and this product claims to also be a carbon monoxide (CO) alarm, too. Although, we’ve only tested it in smoke alarm mode. 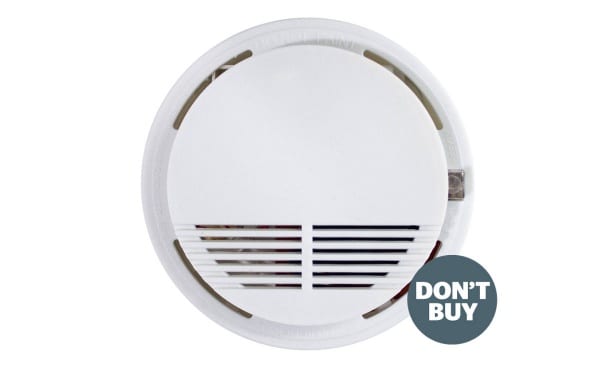 We tested this smoke alarm last year and it failed seven out of eight smoke-detection tests. This year, it’s been tested again and has failed all eight smoke tests. 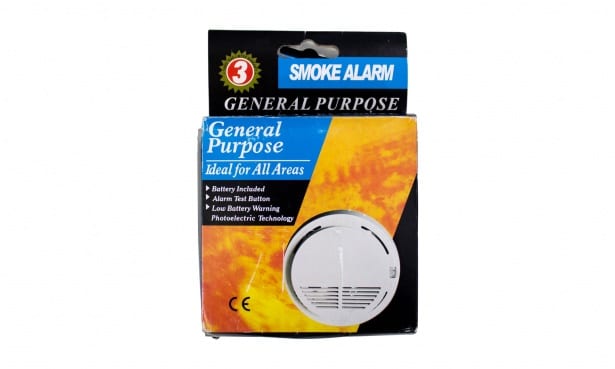 It’s sometimes listed as the SS-168 smoke alarm, but in other listings we’ve seen there’s no brand name or model number. It can be delivered in the box pictured, above, or simply packed in bubble wrap.

There’s a CE mark on the packaging, but based on the evidence of our testing, we don’t think this alarm conforms with the regulations it needs to to be lawfully sold in the UK. 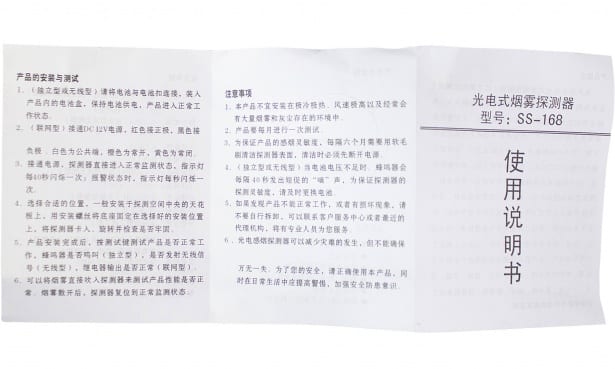 The instructions that came with the alarm we tested aren’t in English, which also means it shouldn’t be sold in this country. But we’re aware that other versions of the alarm come with English instructions.

If you have one of these alarms in your home, our tests show that you won’t be able to rely on it when you need it most.

Contact the seller you bought it from and request a refund.

Then check out the smoke alarms that did best in our tests to find one that you can rely on.

Cheap and dangerous smoke alarms are all over eBay and Wish

We took a look at how widespread the problem of dangerous alarms is on eBay. In our snapshot study, we found that 171 of the cheapest 500 listings for smoke alarms on its site were for alarms that appeared to be identical to the four alarms that had failed our tests.

And among the cheapest 100 smoke alarms, we found 84 that appeared to be identical to the four that had failed our tests.

On Wish, we found 28 listings for the dangerous alarms among the 200 listings we inspected.

This isn’t the first time we’ve alerted eBay to the fact that dangerous smoke alarms are being listed on its site.

Following our smoke alarm tests in 2018, eBay removed 100 smoke alarm listings which appeared to be identical to a product that failed seven out of eight fire tests.

But when we checked the eBay site recently, we found 60 listings for an identical looking alarm among the cheapest 500 listings on its site.

However, following pressure from us, eBay has today removed 171 listings for the four alarms that failed to detect smoke so worryingly in our tests.

An eBay spokesperson told us: ‘The listings flagged by Which? have been removed and the sellers informed. The safety of customers is our number one priority and we work closely with bodies such as Trading Standards to ensure listings sold on our marketplace comply with the law.’

A Wish spokesperson told us: ‘We look to our community to help us ensure that our products are up to the standard that customers expect. We are grateful to Which? for alerting us to this issue and looking out for the needs of the consumer. We are working to remove these products from the platform and are following up with the merchants in question to ensure they are adhering to local laws and regulations

We’re calling on eBay and Wish to contact everyone who has purchased one of these unsafe smoke alarms to alert them to the danger they pose and to explain how they go about getting their money back.

Both sites need to take their responsibilities seriously and do more to stop unsafe products from being listed in the first place.

How we test smoke alarms 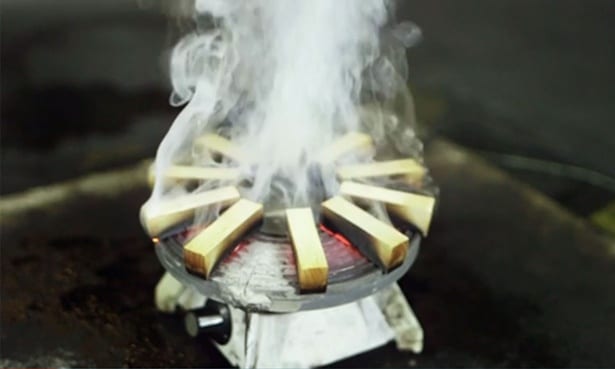 We test each alarm in a fire chamber with smoke from four separate fires. The fires are made up of wood, cotton, plastics and solvents, the kind of things that would be present in a house fire.

We record how quickly they sound and how dense the smoke is at that point. And we test two samples of each product, which means that every brand on test is given eight opportunities to detect smoke.

The best alarms detect smoke every time and they do this quickly. Other alarms will sound the alarm, but they’ll take longer to do this.

If an alarm fails to detect smoke in any one of the eight fire tests we carry out, that product will be a Don’t Buy. And the worst alarms, like the four featured here, simply don’t detect any smoke at all, even when our test chamber is full of it.