Thomas Cook passengers experienced the worst delays compared to any other major airline in 2018.

Flyers had a one in nine chance of arriving back from their holidays more than an hour late, exclusive analysis by Which? Travel has found.

Some 11.5% of the budget carrier’s incoming flights touched down 60 minutes after schedule – up from 7% in 2014. And it wasn’t the only low-cost airline to see its punctuality performance get worse during the period.

In fact, although there were some notable exceptions, delays are getting worse at nearly every major airline and UK airport.

Want to know which carrier to fly with? See the results of our best and worst airlines.

Some 6.2% of all incoming and outgoing flights were delayed by more than an hour last year, compared with just over 4% in 2014.

Our skies are getting slower, with some factors beyond the airlines’ sphere of influence; 2018 was a fairly unprecedented year for air-traffic control (ATC) strikes and bad weather.

UK and Europe’s airspace is also in dire need of modernisation.

However, Jet2 proved that a rapidly growing budget airline can still deliver on punctuality – 5.3% of flights were more than an hour late, down from 5.9% in 2014.

Video: The worst airline for delays in 2018

Which? found that the most delayed route for major airlines at UK airports in 2018 was Stansted to Dalaman in Turkey. Nearly one in four of all incoming and outgoing flights were delayed by over an hour. Passengers travelling to and from neighbouring Dalaman from Stansted with Thomas Cook fared little better.

Thomas Cook told us that its punctuality performance suffered because it cancelled less flights than other airlines.

‘We always want to get our customers on holiday on time and have taken steps to improve punctuality this year, including operating more reserve aircraft to help get flights back on time quickly if delays happen,’ it added. 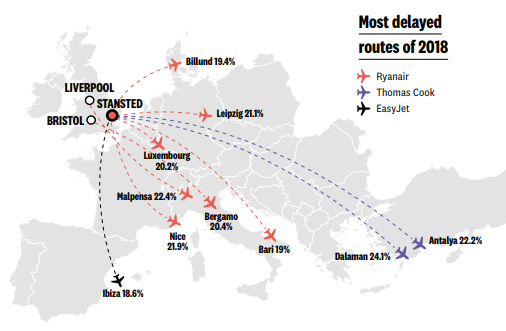 Seven of the 10 ‘nightmare routes’ we identified were operated by Ryanair. The most dreadful was between Liverpool and Malpensa in Italy, with almost one in four flights an hour behind schedule.

Ryanair did not wish to comment on our findings when we first approached them. A spokesperson simply pointed us towards the in-house statistics it publishes on its website.  Since we published however, it has been keen to point out that 2018 was the worst year for air traffic control delays.

The other six Ryanair routes to make the top 10 were all to and from Stansted, the airline’s main UK base. Stansted was the UK’s worst-performing airport in 2018, with more than 10% of flights departing an hour late at an average of nearly half an hour.

High-profile walkouts by Ryanair’s pilots and cabin crew certainly played their part in Stansted’s poor performance. But even if we had excluded the airline from our analysis, Stansted would still have been the worst UK airport for delays.

After we published this article, a Ryanair spokesperson told us that the majority of air traffic control staffing delays are allocated to Stansted and Luton while protecting Heathrow and Gatwick.

Flight delays could get worse before they get better

Our skies are getting busier and, as a consequence, slower. There were more than 2.25m aircraft movement across the UK last year compared with just over 1.5m in 2014.

UK airspace – the ‘motorways’ and ‘ roundabouts’ of the sky – has failed to keep pace with this surge in traffic; it hasn’t fundamentally changed since the 1950s, and the CAA acknowledge that this is a reason for increased delays.

The government body has committed to modernising UK airspace, but the first phase of this modernisation won’t be complete until 2025. Delays could get worse before they get better.

Eurocontrol, which is responsible for the continent’s air traffic management, has published findings which show that airlines are the single largest primary cause of flight delays.

However, Jet2 and BA prove that airlines are able to improve their performances during the period, despite challenging conditions.

Our research: we analysed CAA flight punctuality data from 2014-18. Airports were compared on departure punctuality; airlines on arrival punctuality; specific routes by combining both. Cancelled flights were not included in the analysis.