A recent survey of Which? members revealed that 35% don’t know how to recycle their old tech, and a further 36% thought it was too difficult*. So what is the best thing to do with the old devices cluttering up your drawers?

Don’t leave them in the drawers, that’s for sure: there’s money in those devices – and it isn’t difficult to get at. Don’t bin them either. Far too much of our old tech finds its way into landfill at home and abroad, and it’s disastrous for the environment.

Thankfully your old phone, laptop or camera isn’t doing the Earth any harm while it’s gathering dust in a cupboard, but it’s also not making you any money.

See the brands making the most reliable laptops, TVs, smartphones and tablets.

To recycle or not to recycle?

Recycling is good and landfill sites are bad – that’s fair to say. But while it’s straightforward to turn discarded plastic into anything from bottles to carpet, it’s not so easy to do the same thing with tech made from scores of different materials. Some are valuable – phones are teeming with precious metals such as gold and platinum – but others (plastic, we’re looking at you) not so.

In fact, most of the electronic waste we produce will never see the inside of a recycling plant. According to a cross-party Environmental Audit Committee, 90% of the 44.7m tonnes produced worldwide in 2017 wasn’t recycled. It instead went to landfill sites, was illegally traded or handled in a substandard way. 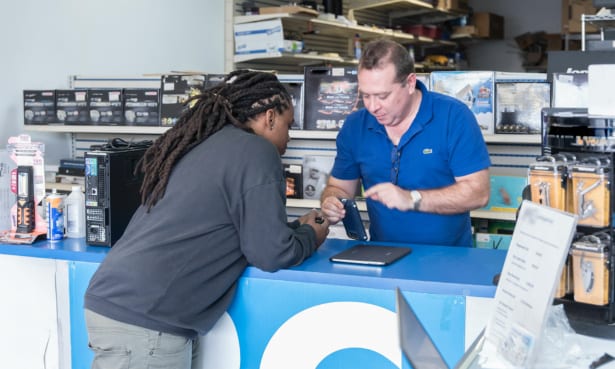 Most companies, and the government, have recycling targets. But these are never 100%. So even if you do make efforts to recycle your old technology, there’s no guarantee it won’t find its way to a colossal scrap heap where it’s incinerated to reach its desirable components, a process that releases harmful chemicals into the air.

It’s still better than putting it in the bin, of course. That route guarantees your old tech will spend the rest of its days poisoning the planet.

How much tech do we have lying around?

Our 2019 tech reliability survey of more than 10,000 Which? members found that a large proportion of people, sometimes up to 50%, replace fully working devices simply because they want something new.

That means in all likelihood there’s a sizeable amount of functional tech just sitting around. The table below shows the percentage of people who upgrade a working device, and presumably still have the old one, versus the number of people replacing a faulty model.

Backup devices: do we really need them?

The same survey that revealed more than a third of people don’t know how to recycle also told us that close to 50% of people keep old devices as a backup*. No one keeps a spare washing machine, kettle or fridge, so why keep old tech?

It can be sensible in some cases. Going without a phone, even for a few days, is far from ideal as it’s many people’s main device for communicating and using the internet. Most tech is significantly smaller than an appliance, so it’s easier to pop in a drawer and ignore, but are the devices we use most really so unreliable that we need backups?

Our 2019 tech reliability survey found that if you buy the right brand you should have many years of fault-free service. There are still brands to avoid and you’ll find a brand reliability guide on many areas from TVs to toasters, so you can buy a device from a brand that makes reliable products.

With the confidence of a reliable product in your home or your pocket, it’s time to make some money.

How to make money from your old tech

This is the fun part: turning your unwanted, and sometimes even broken, tech into cash.

Sell it on the high street

This is obvious, but you may be surprised at how many different types of tech can be sold to second-hand shops. CeX will give you cash for smartphones, wearables, sat navs, speakers, headphones, laptops, cameras and even TVs in some cases. The device needs to be working, but won’t need the original packaging.

The likes of Cash Generators will buy your old tech too.

At Mazuma you can offload an old phone, tablet or smartwatch and they don’t even need to be working, although you’ll get a fair bit more money if they are. Phones bought by Mazuma are reconditioned, where possible, and sold on. Some stay in the UK, while others are sold overseas. Its website says: ‘We aim to reuse over 95% of mobile phones received and promise to recycle any non-reusable phones in the most environmentally friendly way.’

Audio brand Sonos has launched a Trade Up programme which gives you up to 30% off a new speaker when you give up your old one. You can log into your online account to see if your device is eligible. To recycle your old one you can take it to a local certified e-recycling centre, go to a participating retailer or print off a pre-paid shipping label and send it to Sonos.

MusicMagpie is another option. It takes the same devices as Mazuma, but adds laptops, action cameras and games consoles.

Smaller devices can be sent off in prepaid envelopes, while you may need to package bigger items yourself, but shipping is still free.

Give it to charity

There are numerous organisations that will gratefully accept your old tech and put it to good use. ComputerAid will take your old laptop or computer and send it to other countries, where they are used to educate children and train teachers. The Weee Charity does a similar thing by either recycling old computers or giving them to people who need them most.

It’s not strictly a charity, but Freecycle is a great way of offloading the tech you don’t need to someone who does.

What to do before you recycle or sell your tech

Factory reset your device before you send it anywhere. You don’t want to sell a phone with your holiday snaps on, or a laptop that will reveal your website logins. Handily, most of the companies we’ve mentioned will wipe a device anyway, but it’s best to do it yourself first.

Be particularly careful where you have Google or iCloud backups. You could wipe your device only for someone to restore it using data from your cloud. Be sure to remove these before sending your device off.