Electric cars are pricey and limited. These are two reasons that people quote as to why they won’t convert, but the new Renault Zoe is both reasonably affordable and should have a decent range. So will this car make you go electric?

Pressing the accelerator for the first time in an electric car will make your eyebrows raise (as well as make the car go forward). No noise, no vibration, silky smooth acceleration and it will be nippier than you thought.

Our annual car reliability and customer satisfaction survey reveals that electric car owners tend to be the most satisfied. But the sale of electric cars make up just 1.1% of all new car purchases, so what’s stopping people from investing?

Two common issues we hear is that electric cars are too pricey and not able to travel far enough on one charge. But we’ve just driven the new Renault Zoe. By combining a relatively low price with a decent range, it may just have what it takes to convert a lot more people to the electric car lifestyle.

The new Renault Zoe should showcase some of the key benefits of going electric. Read our first drive Renault Zoe review to find out what we thought of it.

If you’ve thought about going electric, do any of the following issues look familiar?

Electric cars are too pricey

Previous research reveals that it’s the price that is all too often one of the biggest reasons that people are hesitant to invest in an electric car. And there’s no getting around it – electric cars are simply more expensive than their petrol/diesel counterparts, even with the plug-in car grant (PICG) applied.

The PICG is the UK government’s incentive to help the uptake of electric cars, and takes £3,500 off the price you pay. All the prices we show in our electric car reviews are the price of the car with the PICG applied.

The new Renault Zoe is sold with two price options: you can either buy it outright or pay a much reduced price and lease the battery.

This makes it the cheapest electric car we’ve tested with a claimed range of around 250 miles or more.

In our latest survey, owners of new cars told us that they spent an average of £29,650 on a brand-new car. Although those who bought small cars (such as the Renault Zoe) spent around £17,300.

That puts the electric Zoe somewhere in the middle if you buy it outright, or close to the average if you choose to lease the battery – although leasing costs will naturally add up.

Renault has not yet released its leasing prices for the new Zoe, although we expect details to be made available soon.

Our tough lab and road tests reveal the best electric cars you can buy now.

Electric cars are too limited

We’ve tested electric cars that couldn’t travel more than 60 miles in one go. But happily, those days are well behind us.

The new Renault Zoe comes equipped with a 52kWh battery and a choice of two electric motors (you don’t get engines in electric cars, just motors).

That puts the Zoe in the same league, range-wise, as cars such as the Audi e-tron (claimed range 241 miles) and the Jaguar I-Pace (claimed range 258-292 miles). Both of which are more than twice the price.

Admittedly, the Hyundai Kona Electric has a similar claimed range and the Tesla Model 3 a bit further. But both cars will still set you back more than the Renault Zoe. 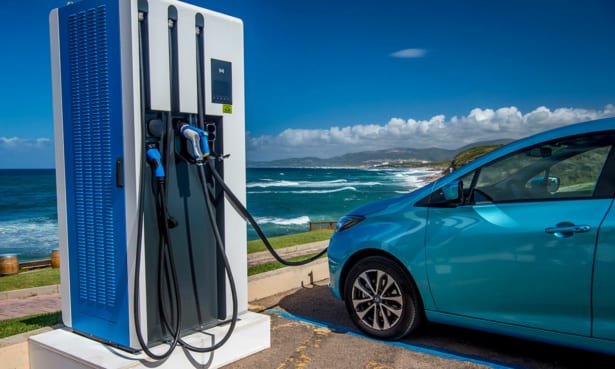 Plugging an electric car into a three-pin socket is just not a viable way to charge it up as it would take way too long – but much quicker methods are available at home or out on public roads.

With every purchase of a Renault Zoe, you get a free 7kW Wallbox charging unit installed for free. It will fill the battery from empty in nine hours and 45 minutes – a comfortable overnight charge.

But it’s public chargers that offer the fastest charging rates. There are various powered charging rates available, but if you find a 22kW charger, you’ll be able to fill your Zoe in three hours flat.

Importantly, the new Renault Zoe has rapid charging capability for the first time. This allows you to attach a 50kW DC rapid charger to the car (often found at motorway service stations) – this will add around 90 miles of range every 30 minutes, or up to 80% of the car’s total range in an hour and 10 minutes.

Unfortunately, the rapid-charging capability does not come as standard. At the time of writing, you’ll have to pay £750 to add this to the Renault Zoe.

If you’re charging at home and have an Economy 7 tariff, you can use the car’s app to select your recharging hours in order to benefit from cheaper electricity rates. You can also do nifty things such as set the car’s temperature ready for your next departure and plan long journeys via charging stations.

The different charging leads, powers and networks can be daunting to any new or prospective buyer, but it need not be. If you’re thinking of going electric, or even if you already have, we’ll guide you through all the options, decisions and terminology in our guide on how to charge an electric car. 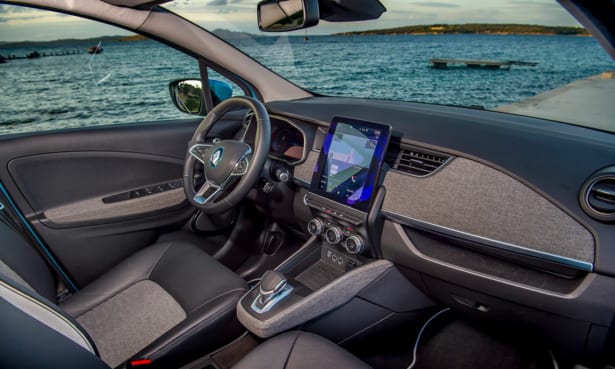 Not really. Electric cars offer you 100% of your torque (pulling power) from the second you press the accelerator; and the result is that they are actually pretty nippy.

In fact, the upcoming Tesla Roadster takes it to the extreme and can reportedly reach 60mph in under two seconds.

The new Renault Zoe doesn’t exactly match the F1-rivaling Roadster, but the R135 100kW motor will get to 62mph in 9.5 seconds. That’s actually pretty decent for a small car and will beat a large number of (non-performance-orientated) similarly sized cars off the line – all without making a noise.

The new Zoe has also introduced a proper regenerative braking mode for the first time, which should allow you to adopt a one-foot driving style like you can in the Nissan Leaf.

One-foot driving sound bonkers? It’s actually intuitive and relaxing – if the car can do it right. Find out what we thought of the Zoe’s capabilities by reading our first drive Renault Zoe review.