Sweden has a reputation for being among the most enlightened of nations. Studies regularly put the Swedes ahead of us in terms of personal wealth, educational attainment and technological advancement.

It’s no surprise then that Sweden has raced ahead on the road towards cashlessness.

But winning this race has turned out to be a poisoned chalice. The near-disappearance of notes and coins has created a whole host of social problems in Sweden. Problems so severe that, at the end of November, Swedish Parliament enacted a law to protect cash access across the entire country.

We’ve spoken to experts and campaigners from across the North Sea to find out what lessons the UK can learn from Sweden before it’s too late.

Comparing how ‘cashless’ different countries are isn’t an exact science, but it’s generally agreed that Sweden is using less physical money than anywhere else on the planet.

Figures from the Riksbank – Sweden’s equivalent of the Bank of England – show that just 13% of consumer payments were made using cash in 2018.

This graph tracks the percentage of consumer payments made using cash in Sweden and the UK since 2010.

These differences are driven mainly by consumer behaviour. Swedes are particularly fond of using Swish – an app that lets you transfer money to people and businesses from your mobile phone. In much the same way, many people in the UK can’t get enough of contactless payments, which made up 19% of all payments in 2018. 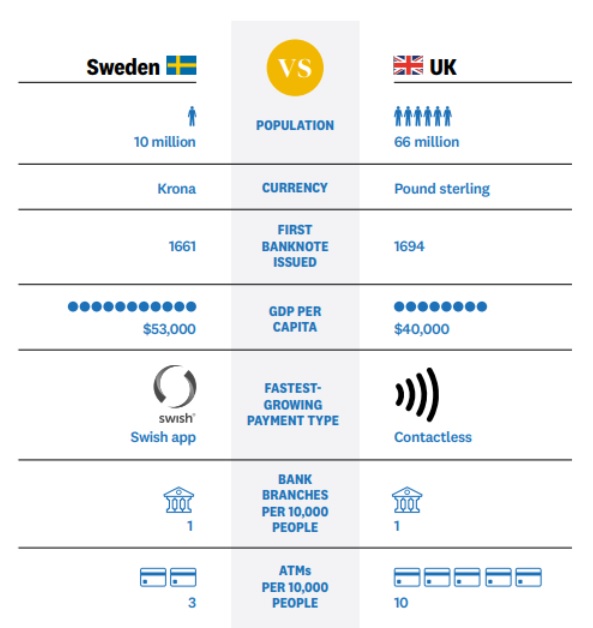 Why do banks close their branches?

But there are also commercial forces at play. Like all businesses, banks want to keep costs down. In 2018, banks successfully lobbied to pay a lower fee to ATM operators every time you use your card to make a free cash withdrawal. This has hit operators’ revenue and led to cash machines closing at unprecedented rates across the UK.

Our bank branch network has been equally blighted. Earlier this year, we revealed that a third of all UK bank and building society branches (3,303) were closed in the just four and a half years.

You can use this map to find the bank branches which have closed in your area during the period.

The fate of Sweden’s branch network has been slightly different: On the face of it, bank branch numbers remained pretty steady in the five years to 2014, falling from 1,722 to 1,629.

But that doesn’t come close to telling the whole story. During the same period – amazingly – more than half of those branches became cashless. This partial shutdown of Sweden’s cash infrastructure may have saved the industry a fortune.

This graph shows how rapidly Sweden’s bank branch network changed in just a handful of years.

Then, between 2014 and 2018, almost a third (453 branches) of Sweden’s bank branch network  disappeared outright, leaving the country with less than 1,200 retail branches.

The groups that suffer most as cash access has declined in Sweden are identical to those in the UK: older people, those with mobility issues and rural communities.

Our sister body, The Swedish Consumers’ Association (SCA), was quick to recognise that there was a problem. ‘It’s a question of democracy, being part of society and living a normal life,’ said Jan Bertoft, secretary general at the SCA.

Outside of major towns and cities, businesses and individuals began to find it seriously difficult to access and deposit cash. The problem was most acutely felt in the north of the country, which stretches up towards Lapland. 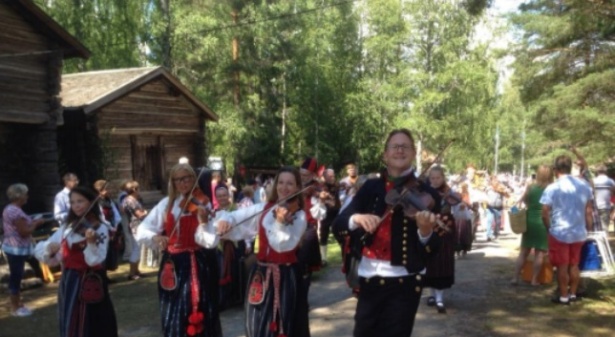 Staffan Nilsson, a Swedish farmer and chair of the campaign group Rural Sweden, described carnage at rural festivals where 10,000 people might be in attendance yet there were no cash withdrawals or deposits available within tens of kilometres. Incidents like this were a wake-up call for many.

‘The banks are happy to look after our money but not to handle it. But if it’s legal tender it should be handled,’ Nilsson said.

Bjorn Eriksson, a decorated civil servant and former head of Interpol, told us that the disappearance of banks in northern Sweden had ‘forced people to behave like criminals’ – parents who ran children’s football teams were stashing weeks and months of club fees into ovens because they weren’t able to make a bank deposit.

As the cash crisis deepened, Eriksson, Nilsson and our colleagues at the SCA realised that something had to be done.

Hear Bjorn Eriksson on the Which? Money Podcast:

Kontantupproret, which translates as Cash Rebellion or Cash Uprising, was founded in 2015. Spearheaded by Eriksson, but with vital support from Rural Sweden, the Swedish Consumers Association, as well as several other groups, the Rebellion fought to put cash access on Sweden’s national agenda. Eriksson estimates that the groups involved had a combined membership of around a million people. 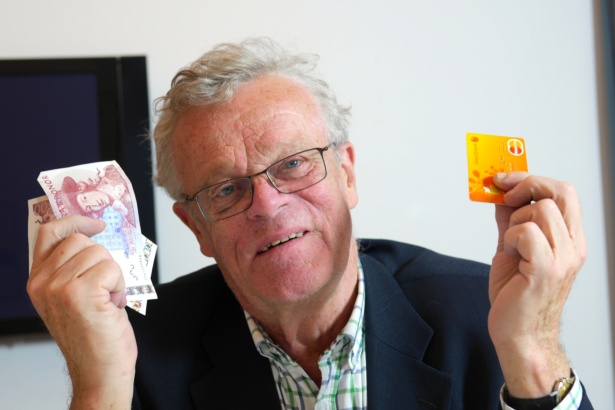 ‘We weren’t working against digital services,’ said Nilsson. ‘But we don’t have quality broadband in remote areas. In a sparsely populated country such as Sweden, there will be blackspots where there is no coverage at all.’

As its name suggests, the campaign was forthright. There were even some instances of direct action. According to several reports, pensioner groups organised ambushes on shops that had stopped accepting cash. The interventions were non-violent but nonetheless disruptive to the businesses in question.

These incidents were never organised by the official Rebellion campaign, and Eriksson was quick to denounce them. However, he added: ‘It’s a reality check that activity might go that way. Maybe it’s a sign that the political system has not been listening.’

For the most part, the Rebellion adopted campaign techniques we’re more familiar with: it brought the problems faced by ordinary Swedes to the attention of politicians through a combination of press activity and direct lobbying. 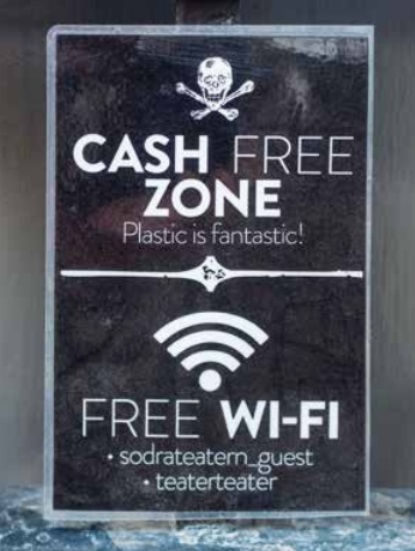 ‘I think we contributed to a change in opinion,’ said Nilsson. ‘A lot of citizens began raising the question and that made politicians aware. We were part of a movement that changed attitudes.’

The campaign also gained momentum as city dwellers and younger people became anxious about some of the wider implications of a cashless society.

A public emergency guide (pictured), titled If Crisis or War Comes, was issued by the Swedish government in 2018. It urged citizens to keep ‘cash in small denominations’ in the event of a catastrophe.

‘A new generation of politicians entered the debate, worried about being defenceless in the event of a cyberattack by Putin’s Russia,’ said Eriksson. He added that concerns around security and privacy were more tangible red flags for Sweden’s political class to get to grips with than the less fashionable concerns of rural citizens. 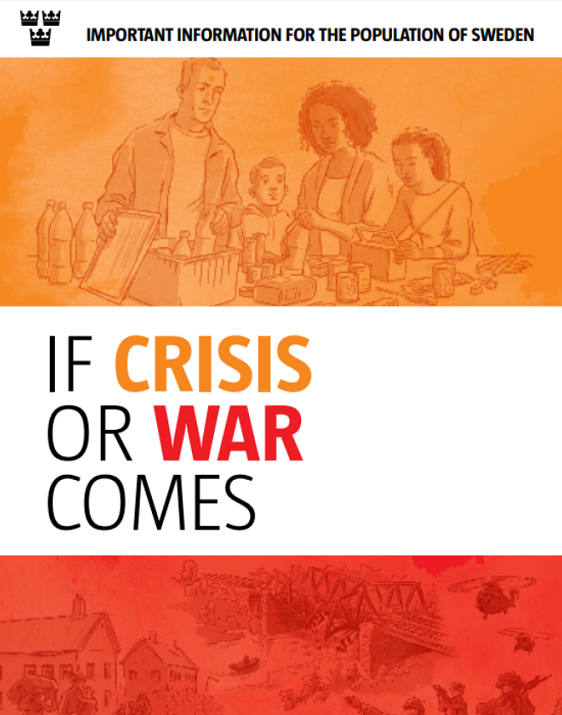 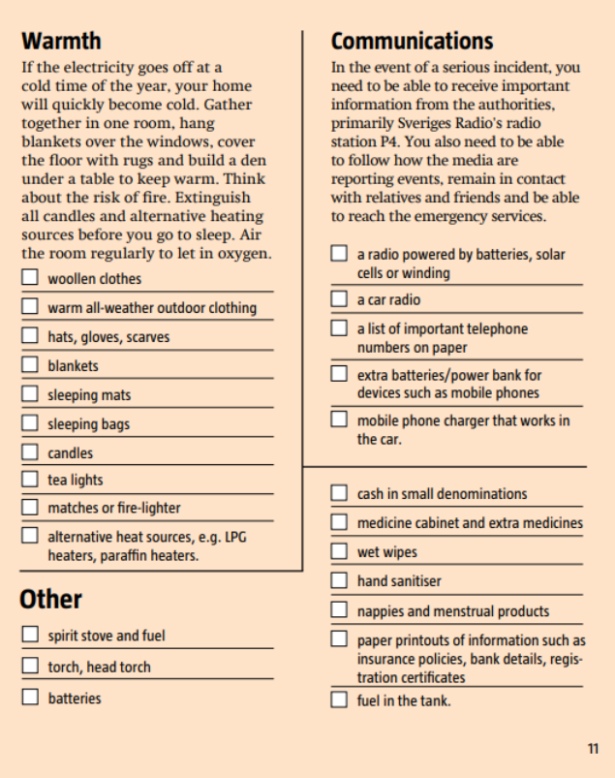 Your bank branch can be saved

The proposals were based on a report by the Riksbank, which argued that large banks have an overwhelming responsibility to provide cash services. It is simply unreasonable, the Riksbank concluded, for banks to abdicate their responsibility of handling the legal tender.

In concrete terms, the new laws will force large banks into opening or reopening cash services in rural parts of the country.

At present, 15% of Swedes live more than 25km by road to their nearest cash deposit or withdrawal facility. The Riksbank says this will be reduced to 0.3% of the population (around 30,000 living in the most remote places) if its proposals are implemented.

Banks will face severe sanctions if they do not comply. Asked whether he considered the outcome a victory for the campaign, Nilsson replied: ‘I think that, although digital payments will increase, we will still have cash for a long time. It will be a long time before cash collapses.’

Eriksson was also optimistic: ‘The banks are on the way to giving in. In the long run, politics normally beats the markets. They will pay to install cash services.’ But he also fired a warning: ‘It’s not a total victory – it’s a temporary victory. The next battle is on the retail front.’ 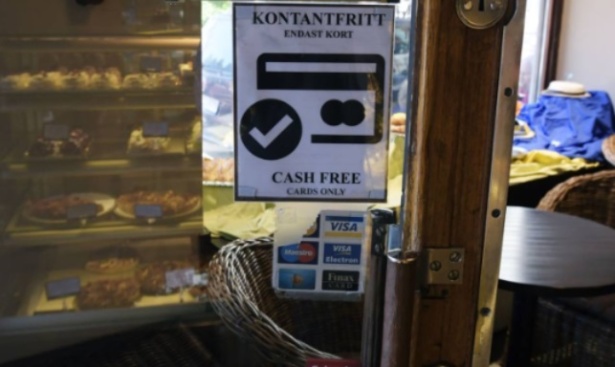 A cautionary tale for the UK

Even with the banks brought to heel, there remains the problem of what should be expected of shops and businesses. In April 2019, the Riksbank petitioned the government to review the concept of a ‘legal tender’, including the question of whether businesses should be legally obliged to accept national currency.

Although Cash Rebellion thinks that its work is far from done, we’re inspired by its achievements. We are concerned that the UK is sleepwalking towards a cashless society and are urging the government to take note of the Swedish lesson and implement laws to protect access to cash before it’s too late.

You can find out more about our ‘Freedom to pay. Our way’ campaign and sign the petition calling for better protections on cash access. You can also share your views by joining the discussion at Which? Conversation.