A third of all UK bank and building society branches were shuttered during the past four and a half years – and of those left, almost one in 20 are open for less than five days a week, exclusive new Which? research reveals.

One constituency, home to hundreds of thousands of people, has now lost all of its local branches, and others have only a handful left.

The cuts – more than 3,000 in total – were primarily driven by closures at brands belonging to the ‘Big Four’ banking groups, namely Barclays, HSBC, Lloyds Banking Group and RBS Group.

RBS closed an astonishing 74% of its branches between January 2015 and August 2019, while its sister brand NatWest closed 49% of its outlets.

We explain which areas have been worst hit, why banks are closing branches and how opening hours affect access.

Where are bank branches closing?

At constituency level, the worst-hit areas were typically rural. Wentworth and Dearne in Yorkshire, with a population of 98,000, has the dubious claim to fame of being the first constituency in the UK to lose all its bank branches, though there are a couple just beyond the boundary.

Other badly affected constituencies are North East Derbyshire and Stoke-on-Trent North, both of which lost six of their seven branches, equating to 86% of their network.

Indeed, eight UK parliamentary constituencies now have only one bank branch left, while 18 have only two.

You can look up your constituency in the table below to see how things have changed.

Alternatively, you can see where the most branches have closed UK-wide in our map, or visit our guide on bank branch closures.

You can use the search bar to find your local area, filter between bank brands or choose a year to see when branches closed or are due to close.

Which banks closed the most branches?

Given closures tended to be more focused in rural areas, brands with a strong presence outside of larger towns and cities are more likely to have closed branches en masse. Indeed, the majority of the more than 1,000 RBS closures were in Scotland and the North West of England.

This chart shows how many branches were closed by each UK current account provider during the past four and a half years.

Barclays closed at least a third of its branches with 481 closures, although the true figure could be higher, as the bank did not share full closure information with Which?.

Nationwide deserves a special mention as it only closed 4% of its branches during the period, a tiny proportion compared with other large providers. The building society has also just opened a new all-week ‘concept branch’ in Sheffield. Another, in Staffordshire, is planned for later this year.

Outside the Big Four, the biggest proportional reductions were made by the Co-op, First Trust, Clydesdale and Yorkshire Bank.

Keeping your local bank branch is a small consolation if it’s rarely open. We’ve been able to analyse the number of days that remaining bank branches are open – the first time this has been done.

Our UK-wide analysis reveals 11 branches that are only open for one day a week, all in Scotland. Two of these are RBS branches in the Orkney islands: RBS Stronsay (see below) and RBS Sanday.

The other nine of these ‘day a week’ branches are run by TSB, which in July of this year slashed opening hours at 94 of its sites.

While some of these areas are serviced by ‘mobile branches’, offering a range of everyday finance services, the convenience is not the same as a local branch. 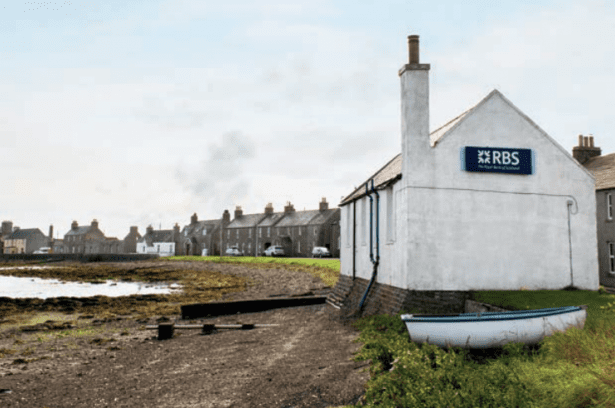 RBS Stronsay has the fewest opening weekly hours of any bank branch in the UK, but it also has a good claim to being the branch set in the most beautiful surroundings. Local residents and businesses are grateful for the services it provides beach Tuesday from 9.15am to 2.45pm.

Viv Erdman, 63, who runs a shop across the road, has lived on Stronsay with her husband for 16 years.

‘When we first came here we looked at the door and laughed,’ Viv said. ‘But once you’ve been here a while, you think: “why would you want to go to the bank any other day?”‘

The Stronsay branch is opened each week by RBS’s ‘flying banker’, who island hops across Orkney by air (depending on the weather) and ferry. A new employee recently assumed the role, with her predecessor retiring after 31 years of service. 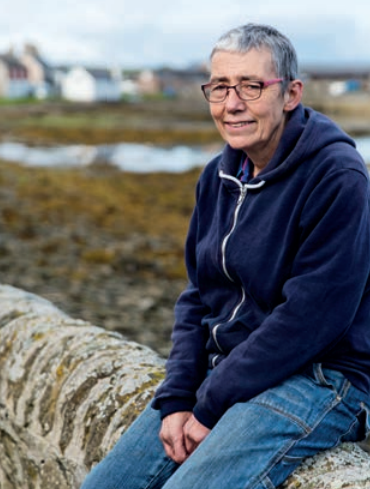 ‘We haven’t had a bank for four weeks,’ Viv said. ‘The banker retired and it was closed for three weeks due to fog. The fog has been more of an issue this year.’

Viv admits to having an interest in the fate of the branch as her shop contains a Post Office, which provides banking services.

‘You’re speaking to the wrong person,’ she joked. ‘More and more people are doing their personal banking at the shop because the branch is open less often. And we’re very happy with that.’

In many communities without a local bank branch, the Post Office is touted as an alternative.

Everyone can make cash withdrawals and balance enquiries at the Post Office, while cash deposits are available to most customers.

That said, there are all sorts of things you can’t do, including making transfers and seeking advice about loans or personal investments.

Find out more: can the Post Office plug the gap left by bank branches?

While the shift towards digital banking has brought convenience to many, it’s not necessarily a solution for all, with about a third of the population still not using online banking according to UK Finance figures.

Meanwhile, millions of people who rely on cash as a payment method may be left behind, as both bank branches and cash machines become increasingly scarce.

Which? has called for the Chancellor Sajid Javid to take action to guarantee people’s ability to access and pay with cash.

Jenny Ross, Which? Money Editor, said: ‘Banks are closing their branches at an alarming rate, which risks shutting many people out of vital financial services and affecting their ability to access their own cash. Bank branches play a crucial role within communities, serving consumers and businesses alike. The industry must ensure that no-one is left behind by the digital transition and when banks shut their doors they don’t shut their customers out of important banking services.’

You can find out more about our ‘Freedom to pay. Our way’ campaign, and sign the petition calling for better protections.

You can also share your views by joining the discussion at Which? Conversation.