The number of people hit by card ‘skimming’ fraud has doubled in just one year, according to new research. Do you know what to watch out for at an ATM?

Compare the Market, a credit card comparison website,  found over one in 10 people had fallen victim to this kind of crime in 2019 compared with 4% last year, with victims losing an average of £846.

Fraudsters are getting increasingly more sophisticated in stealing card information by tampering with cashpoints and petrol station payment terminals.

But despite so many people being affected, awareness is low; in more than a third of cases people who had their credit cards compromised either didn’t know or couldn’t remember how it happened.

Here, Which? reveals what you need to watch out for the next time you use an ATM or unmanned payment point.

What is card skimming?

The practice involves using a small device to capture and store the details on the card’s magnetic stripe – this includes the card number, expiration date and the card holder’s full name.

The devices can be placed on all kinds of card readers – but ATMs are most commonly targeted.

In its survey, which asked 2,100 UK adults about their experience of credit card fraud over the past year, Compare the Market said just 4% of those who’d had their card skimmed had their credit card physically stolen.

This means the fraudsters were able to use the information they’d collected to spend money without needing the card at all.

How are criminals targeting ATMs?

ATM fraud is evolving all the time, as criminals come up with new ways to get around security systems. So it’s important to stay vigilant.

The image below highlights some of the most common points of danger on a cash machine and the surrounding area. Read on to find out what you should be checking. 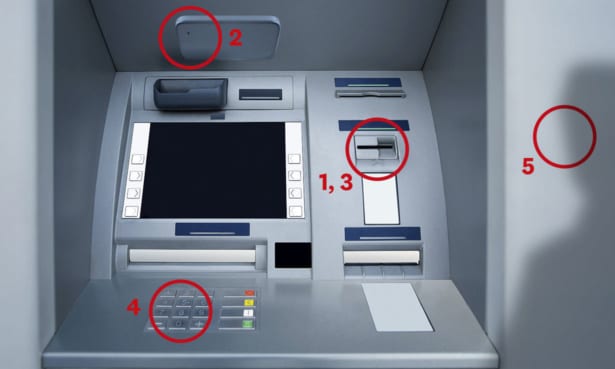 In order to read your card’s magnetic stripe, a card skimmer would need to be attached to an ATM’s card reader.

Skimmers can be fixed over the slot where you enter your card, and spray painted to blend in.

Giveaway signs can be scratches, glue residue, tape, parts of the machine looking a slightly different colour or newer than the rest of it, or the LED light above the card slot may be missing.

It can even be worth giving the card reader a quick wiggle to check whether it’s properly attached.

The card slot itself can often be a bit wider than usual if it’s hiding a skimmer.

Scammers may have attached a camera to an ATM to capture your card details and Pin.

They’re often hidden in places you wouldn’t think to look, such as panels above the machine, or even in bank leaflet stands to the side of the screen.

Removing any leaflets that could be hiding something, and checking the panels for any that look like they’ve been stuck on, or are a slightly different colour, are good ways to safeguard against this.

In some cases, the cameras are so small they only need a tiny pinhole to see out of; check for any small holes that could give a camera a view of the keypad.

If you’ve ever had an ATM fail to give your card back, you’ll know it’s incredibly frustrating.

However, it could be made even worse if the cashpoint has been fitted with a card trap – also known as a ‘Lebanese Loop’.

It’s a device that traps your card in the machine, and when you inevitably walk off and leave it – vowing to go into your bank the next day – the fraudster is free to retrieve it.

Unfortunately, the peak time for these kinds of devices to be used are Friday evenings, as the criminals make the most of some bank branches being closed over the weekend.

Instead of leaving your card, you should contact your bank immediately to cancel it.

Fraudsters could also capture your Pin by attaching a fake keypad over the original.

As you enter your Pin, the latest technology can even send it to the criminals instantly via wi-fi.

If this method is coupled with a card trap, or the scammer manages to steal your card from you, they’ll instantly be able to start using your card.

The fakes may feel a bit loose, or strangely thick and spongey.

Of course, there doesn’t have to be any fancy tech involved at all in order to put you at risk from a scammer.

‘Shoulder surfing’ is when criminals stand shamelessly nearby, peering over your shoulder to try and see your Pin.

They may also try to distract you as a way to quickly take your card. Common techniques include dropping something near you, or bumping into you while you’re using the ATM.

With this in mind, try to be aware of anyone who’s around when you’re using a cashpoint. If you’re worried, consider getting cash out elsewhere.

How to stay safe using a cash machine

The Metropolitan Police has issued advice for people using ATMs:

You can find out more information about scams and how to stay safe in our range of guides.