Now that the new iPhones 11s have arrived, you might think it’s a great time to get a bargain on the older models.

Typically when a new flagship phone launches, its predecessor sees a price drop. However, as a brand that’s well known for its steep prices and modest discounts, how much can you really expect to save?

To find out we’ve trawled the deals in the run up to Christmas, and crunched the numbers to see if you’re better off going for a contract or Sim-free deal on these phones. We used mobiles.co.uk to check for the contract deals and prices are based on 24-month contracts.

Find out which iPhones make our round-up of the best mobile phones.

Should I buy an iPhone on contract or Sim-free?

Although in recent years, buying a phone on contract has worked out to be the pricier option, the pendulum has shifted back in favour of contract deals in the case of these iPhones.

As far as choosing between the newer or older iPhones, based on the differences in price between them and the upgrades you get with the newer models you would be better to invest in the new iPhone 11s. At worst, it is roughly £150 more expensive to get the iPhone 11 Pro Max compared with the XS Max (Sim-free).

It’s also worth mentioning that many of the contract offers below have high upfront costs for the phone. While this might not be ideal if you don’t have that sort of cash to spare, we found that contracts with very low or no upfront costs can work out more expensive overall – in some cases significantly so. Pay careful attention to the total cost of the contract – including the phone and bundle, so you know exactly how much you’re paying.

How much data do you need?

Whether or not you want a phone with a low (5GB) or high data allowance (20GB+), when we shopped around for the available deals mobile phone contracts trumped the Sim-free option.

It’s usually a good idea to avoid paying for more data than you need, but on these iPhone deals we often found that higher data allowances had better value on the whole compared to lower data allowances so even if you don’t plan on using much data, you’d be getting a better deal by opting for a high-data contract. 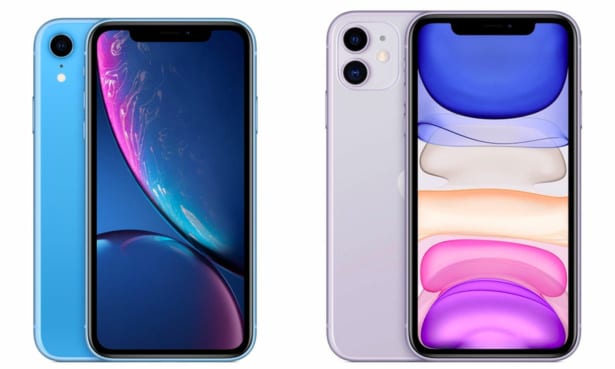 Just like the iPhone XR when it first launched, the iPhone 11 is the cheaper alternative to the other two iPhone 11s, but that’s not their only similarity.

The iPhone 11 has an identical 6.1-inch Liquid Retina LCD display, screen-to-body ratio (79%) and dimensions to its predecessor. However, the biggest difference is that the iPhone 11 now has a second rear camera (12Mp ultra-wide angle lens) and a higher resolution 12Mp front camera, up from 7Mp on the XR. 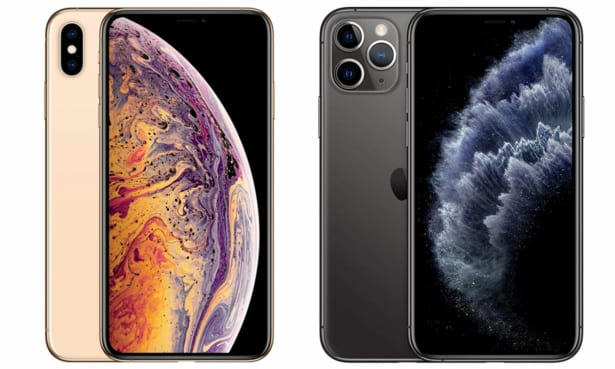 As with the cheaper iPhone 11, it’s physically quite similar to its predecessor, with a 5.8-inch Super Retina XDR OLED screen, though the XDR element is designed to give the 11 Pro a brighter display.

The 11 Pro’s processor and cameras are where you’ll see the biggest upgrades. As well as having the new A13 chip, it also has an extra camera lens, so for the first time on an iPhone, you’re getting a triple rear camera: 12Mp ultra-wide angle, 12Mp wide angle and 12Mp telephoto lens. 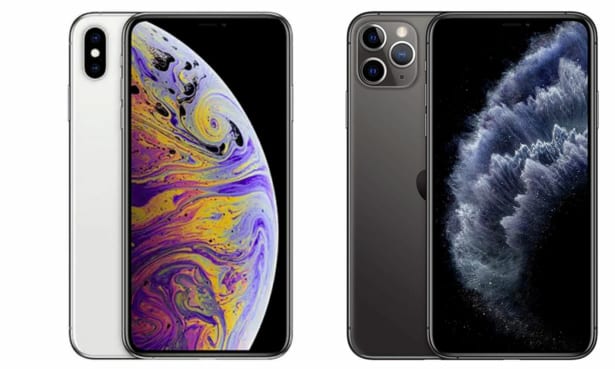 If you opted for an iPhone XS Max after its 2018 launch, you may already be accustomed to the astonishingly high price for Apple’s highest spec smartphones.

Identically to the 11 Pro, the most noticeable difference between the 11 Pro Max and XS Max’s display lies in its new XDR technology that should give you a better and brighter viewing experience on its massive 6.5-inch screen.

The 11 Pro Max also has a significantly bigger battery than its predecessor – up to 3,969mAh from 3,174mAh on the XS Max and it also has the new camera setup, which mirrors the 11 Pro.

Our mobile phone contract calculator can help you decide whether to opt for a Sim-free purchase or enter a contract.

Considering that there are some genuine upgrades with the new models, you might be better off with those instead, but if you want to know our final verdict on how good these phones are, you can compare them to the likes of the Samsung Galaxy phones and the Huawei mobile phones with our mobile phone reviews.