We asked 1,449 investors – 642 of whom were Hargreaves Lansdown customers – how satisfied they were with their investment platform and how likely they were to recommend it to others. We’ve used their responses to compile a round-up of the best and worst investment platforms.

In our first investment platform survey back in 2014, Hargreaves Lansdown came out on top and has continued to score highly since.

But the UK’s largest investment platform, which has more than 1.2 million customers, has been hit hard by its association with disgraced fund manager Neil Woodford.

Here, we explain what happened to Hargreaves Lansdown and reveal which investment platforms have been named Which? Recommended Providers for 2020-21.

Hargreaves Lansdown achieved a customer satisfaction score of 67% – compared with  88% and 77% for our Which? Recommended Providers, and many of its customers expressed a sense of betrayal.

Neil Woodford’s Equity Income fund was suspended in June 2019, and 133,000 Hargreaves Lansdown customers were invested directly through the platform; a further 158,000 held the fund indirectly within its multi-manager funds.

Like other Woodford investors, they were prevented from accessing their money until this year, while still paying the fund’s fees.

The fund remained on the Hargreaves Lansdown Wealth 50 recommended funds list until the day of its suspension.

That was despite worsening performance and increasing proportion of illiquid assets, which can’t be sold easily.

Hargreaves Lansdown says it has been working hard to improve its services.

It told us that: ‘Regarding the LF Equity Income fund, we share investors’ disappointment and frustration, and are pleased the majority of money has now been returned from the fund.’

The platform is replacing the Wealth 50 recommended fund lists with a Wealth Shortlist, with independent oversight.

Hargreaves Lansdown received impressive customer scores for some areas of its service.

One customer commended their ‘absolute top-notch customer service, the best of any company in any industry I have ever dealt with. The range of investments is large, the website is easy to use, and the staff are attentive and helpful’.

Our pricing analysis found Hargreaves Lansdown was among the most expensive platforms for larger portfolios of £50,000 and above. Its costs were considerably higher than our Which? Recommended Providers – see the graph below for a comparison.

Our Which? Recommended Providers for 2020-21 are Vanguard and AJ Bell Youinvest.

To see how your provider performed, read our guide to the best and worst investment platforms. You can find a cost comparison between platforms here.

Vanguard and AJ Bell Youinvest were picked not only for having the highest customer scores, but also for reasonable fees.

In our analysis, neither platform was among the three most expensive platforms for various portfolio sizes and both were cheaper than Hargreaves Lansdown in almost all cases.

When comparing prices, keep in mind that different platforms offer access to different types of investments, including platform-specific fund discounts. Vanguard, for instance, only offers access to a range of its own funds. 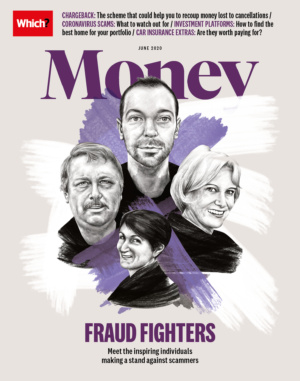 Also in this issue: we meet the fraud fighters, how to use chargeback to recover travel costs and our introduction to car insurance extras.

Try Which? Money for just £1, including access to all our online product and service reviews.