Wearing a mask or face covering is now compulsory in shops in England.

It’s now mandatory to wear a face covering when shopping in England, as it has been in Scotland since 10 July.

Here, we explain the new guidelines and get expert advice from a scientist on whether safety measures in shops (including wearing masks) will help prevent the spread of coronavirus.

All shoppers have to wear face masks or coverings in shops in England from today (24 July), with the exception of children aged under 11 and people with certain disabilities.

This brings England into line with Scotland, where masks are already compulsory in shops, though in Scotland children must be under five to be exempt.

Shoppers found not wearing masks could be issued a £100 fine, reduced to £50 if paid promptly.

Is it safe to go shopping now?

Retailers are working hard to make shops as safe as possible. But how effective are different safety measures in preventing the spread of coronavirus?

We spoke to Professor Keith Neal, the University of Nottingham’s Emeritus Professor of the Epidemiology of Infectious Diseases, to get his view on the science behind the changes. 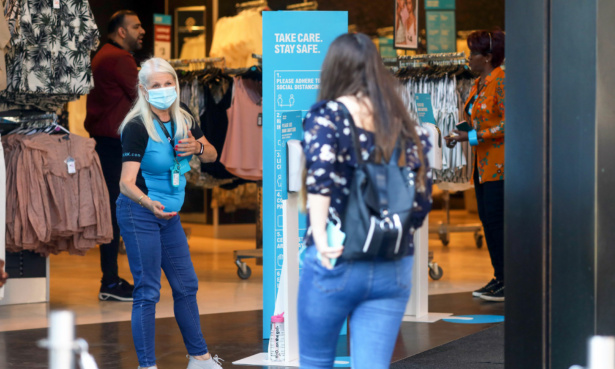 Wearing masks or face coverings in shops has been compulsory in Scotland since 10 July and is now compulsory in England, too. But how effective are they?

‘The wearing of face masks in shops or enclosed shopping centres should help reduce the spread [of coronavirus].

‘The evidence is accumulating that masks have a part to play in reducing transmission and also in protecting the wearer.

‘Enforcement need not be an issue as shops can simply refuse to serve non mask-wearing customers.’

Professor Neal said that exempting children from the rule is supported by scientific evidence, but that they could still be encouraged to wear masks, ‘especially if they had their favourite characters on them’.

Washing your hands regularly remains one of the most important things you can do to control the spread of the virus. In lieu of basins with running water, all major retailers have installed hand sanitiser pumps at store entrances.

‘It’s a good idea because it’s nice and simple. It can help manage the flow [of people] into the shops, because you have to wait there to do it. And it’s not actually inconveniencing people.’

Many people – both customers and staff – are choosing to wear gloves in shops, but is there any point?

‘You can’t wash gloves as easily as you can wash hands,’ says Professor Neal.

He explains that your skin is actually better at killing the virus than gloves are, although there may be some situations where gloves are useful for certain members of staff.

If you’ve been to a supermarket during lockdown, you’ll be used to these by now – transparent screens dividing the cashier and customer.

Screens are a good idea. ‘Any droplets or particles you breathe out will hit that screen and become essentially non-infectious, because they’ll just sit there on the screen,’ he says.

Unless you touch the screen, which isn’t advised, these make everybody safer.

To our knowledge, only two retailers, Apple and Furniture Village, are checking customers’ temperatures before letting them enter stores. Robert Dyas is checking the temperatures of its staff.

The fever you’d have from COVID-19 is likely to be so high that you’d know you had a fever and probably wouldn’t want to go out. But that doesn’t mean temperature checks are useless.

‘It may identify a few people who shouldn’t be out,’ Professor Neal says, ‘but I think hand washing is better.’

Much like hand washing, temperature checks act as a reminder that there’s a pandemic underway, and we should behave accordingly.

Most retailers require customers to shop alone, or at least without any other adults from their households.

Go Outdoors and Waterstones are the only retailers Which? has spoken to that are not encouraging customers to shop alone.

Ikea, meanwhile, will only allow parents to bring one child with them.

‘There’s no reason to go shopping with another person unless you’re a single parent.’

Waterstones made headlines a few weeks ago when it announced it would place any books that customers had touched but not purchased into quarantine for 72 hours.

Other shops are taking a similar approach, leaving products off the shelves for at least 24 hours if they’ve been touched or returned by another customer.

Professor Neal told us that quarantining items would reduce the amount of virus, but he couldn’t comment on the impact it would have on transmission.

‘I would be more worried about catching COVID from an asymptomatic person breathing out in Waterstones than from touching a dozen books that they’d touched,’ he says, ‘because I can wash my hands and not put them near my face.’

However, there is still value in putting touched items aside if retailers can make it work. ‘It’s a pragmatic, simple step which – if they can [make it] work within their business – is a perfectly reasonable step to take.’ 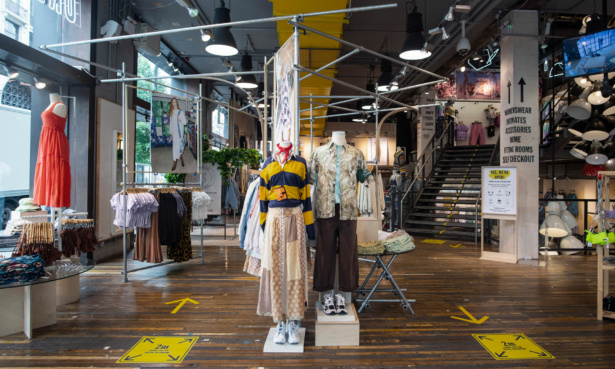 Under current guidelines in Scotland, Northern Ireland and Wales, stores are required to have enough space to allow customers and staff to keep a two-metre distance from others.

However, businesses in England are allowed to base social distancing measures on ‘one metre plus’ provided ‘mitigating measures’, such as the use of face coverings, are in place.

Every shop we’ve contacted has limits on the number of customers allowed in store to help with social distancing, based on the size of each store.

Topshop said it was allowing around 16 square metres per person, while Waterstones is allowing three to six people per 93 square metres, which works out as about the same. Homebase says a typical store can allow 30 people at one time.

There’s no easy answer on how far away we should keep from others.

‘You could make it 10 metres and it’d be even safer, but it’s impractical – this is the problem.’

Which shops are open?

Non-essential retail is now allowed in all four UK nations, but many of the big chains are taking a staggered approach to reopening, starting with a small number of branches.

By now, we know Ikea and Homebase have opened all of their UK stores. John Lewis plans to have all of its shops open by 30 July, excluding the eight branches that are closing down permanently.

Outdoor clothing chain Go Outdoors told us nearly all of its stores were open. It has since gone in and out of administration.

We asked several major retailers what steps they’re taking to keep staff and customers safe. The table below shows which measures are in place at which retailer.

Of course, independent shops in your local area may well have reopened too, or be planning to do so soon.

One way of checking which stores are open near you is to use Mastercard’s tool at ShopOpenings.com, which checks whether a Mastercard transaction has been made in the store in the past seven days to determine whether it’s open.

Will shoppers return to the high street?

When we surveyed 2,002 members of the public at the start of June, 38% said they didn’t feel confident about their health and safety when returning to the shops.

And a survey from Meepl found 20% of shoppers saying they’d never go back to bricks and mortar clothes stores again.

When we asked our followers on social media, some of those who had been shopping said they’d witnessed customers ignoring signs. Others said they would stick to shopping online for the time being.

Listen: our experts discuss shops reopening on the Which? Money Podcast.