The weather has turned and autumn is well and truly here, so if you own a trampoline it’s time to consider how you’re going to store it for winter.

In a June 2020 survey,* we quizzed parents on what they do with their trampoline when it’s not in use.

More than a third of parents (39%) say the trampoline stays in the garden all year round uncovered.

But what happens when you leave your trampoline out in the elements, and what sorts of problems might you encounter if you do? Read on to find out.

How do most parents store their trampoline?

When it comes to your garden trampoline, the vast majority of parents – 81% – say their trampoline stays in the garden all year round.

And out of those, 46% cover their trampoline and 39% told us it remains uncovered.

A very conscientious one in five parents (20%) will completely disassemble their trampoline and store it away in the garage or shed for the winter, which is a good way of protecting it when the weather turns. 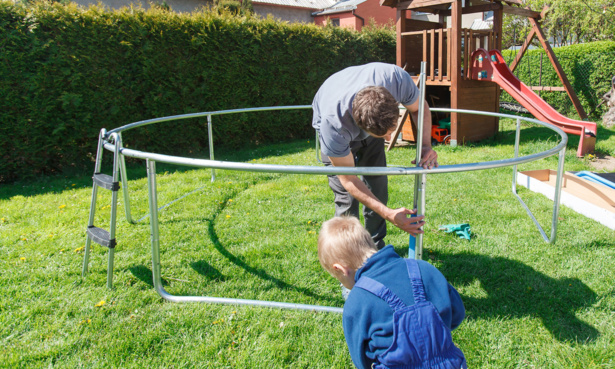 Meanwhile 7% of parents say they partly disassemble it, for example removing the netting and padding, and storing those in a shed, while leaving other parts such as the frame outdoors.

Read our tips on how to buy the best trampoline.

Most common issues with trampolines

We also quizzed parents about whether they’d had any problems with their trampoline, and what these issues were.

Top of the list with 38% was rust on the frame. While many manufacturers will boast their frame is made from rust-free metal, keeping it outdoors in typical British weather probably won’t help with rust issues. 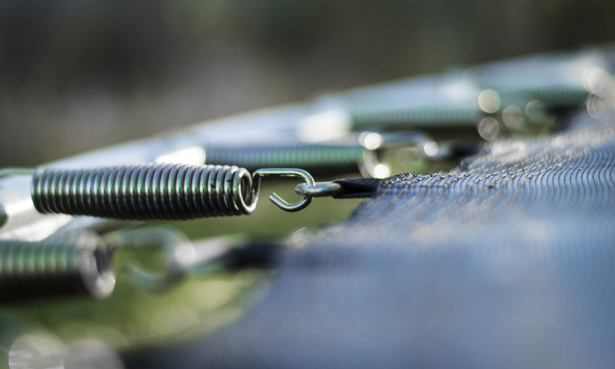 Just behind rust, with 33%, is a squeaky frame when it’s in use.

If you’ve ever been woken up to the dulcet sound of children jumping on a creaking trampoline at 8am on a Saturday, you’ll know how important it is to tackle this issue.

A certain amount of squeaking is inevitable due to the action of the springs, but if they’re rusty, this will make the noise worse.

While some wear and tear of your trampoline is to be expected, it’s important to keep an eye on things like this to ensure they don’t affect the safety of the trampoline when it’s in use.

Read our guide on trampoline safety.

How to prevent problems with your trampoline

To reduce your chance of encountering issues with your trampoline, follow our storage tips:

Move your trampoline indoors for winter

This is probably the best way to prevent the different pieces of your trampoline from getting wrecked by the weather. Over exposure to the elements won’t just affect the metal frame, causing it to rust, but can cause deterioration of the foam padding and netting.

If you don’t have space, or can’t face completely disassembling it, take parts of it down (as some of the parents in our survey did) and store those indoors, leaving the frame outdoors.

Invest in a trampoline cover

You may remember the John Lewis Christmas advert from a few years ago, when a range of local wildlife made full use of a trampoline overnight before Buster the Boxer dog was able to have a go.

However, the reality is that the last thing you want is animals climbing around on it, as it’s likely they’ll leave a few other reminders of their presence as they mark their territory, too.

A plastic cover will protect your trampoline from wildlife and weather. Most are designed to protect the jump pad, springs and legs of the frame but you’ll need to remove the netting and poles first before you fit it.

Inspect the trampoline frame regularly, even if it has a cover

This will help you spot if there’s areas of rust or mildew appearing. Wet weather could mean damp gets trapped between the trampoline and the cover, so regularly remove the cover on sunny days to let it dry out. 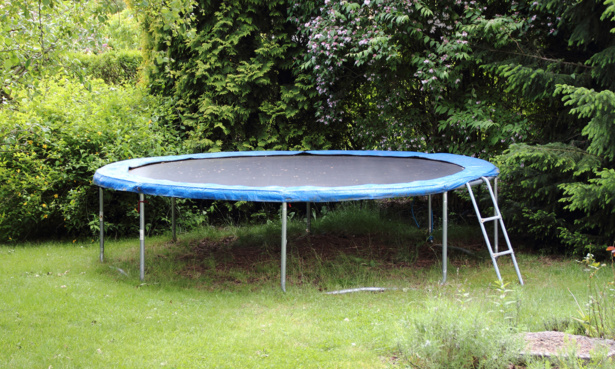 Clear the trampoline of leaves and snow

If your trampoline is uncovered, the jump pad should let water through, but you should clear any fallen leaves from it so they don’t turn mulchy. If it snows, it will get trapped on the jump pad and the weight of the snow could stretch the springs.

We’d always recommend weighting down your trampoline, even in the summer months when it’s more regularly used. However, it’s even more vital now when high winds from winter storms could send it flying into the side of your house or even into a neighbour’s garden (trust us; just type ‘trampoline storm’ into Google).