As this year’s Black Friday sales edge closer, Amazon and Google have both launched new versions of their voice-activated speakers at £90. But do either of these gadgets bring anything new to the table?

Amazon’s 4th-generation Echo speaker has had a design makeover and is now rocking an all-new, sphere-shaped body. But if it wants to become one of the most popular smart speakers when the Black Friday sales hit, it will have to take on the Nest Audio. Google is confident in its combatant, promising ‘amazing sound at your command’.

We won’t be able to give our full verdict on these speakers, including whether they outshine their predecessors, until they’ve been put through their paces in the Which? test lab, but there’s still plenty to discuss.

Below, we take a closer look at the key differences between these new arrivals.

Expert smart speaker reviews – speakers from Bose, JBL and Sonos put to the test alongside other devices from Amazon and Google.

The price of the new Echo and Google Nest Audio may be the same, but there are some key differences that go beyond how they look.

Here’s a summary of how the two speakers compare on paper:

This new Alexa-enabled smart speaker was announced alongside a refreshed Echo Dot and Echo Dot with Clock. Amazon has confirmed that all three are built with recycled materials and support an energy-saving Low Power Mode, which kicks in when the device is left alone without a task to perform.

It can deal with all the voice commands you’d expect on an Amazon smart speaker. Without having to reach for your smartphone or tablet, you can play music, check the news headlines or set reminders. You can also download additional apps (Amazon calls them Skills) through the Alexa app, which essentially lets you upgrade the speaker with extra voice commands.

The iconic Alexa LED light ring sat at the top of the old Echo, but it’s now found at the base of this new model. Simply start your voice command with ‘Alexa’ and you’ll see a burst of light wrap its way around the device to show the speaker is listening to you. 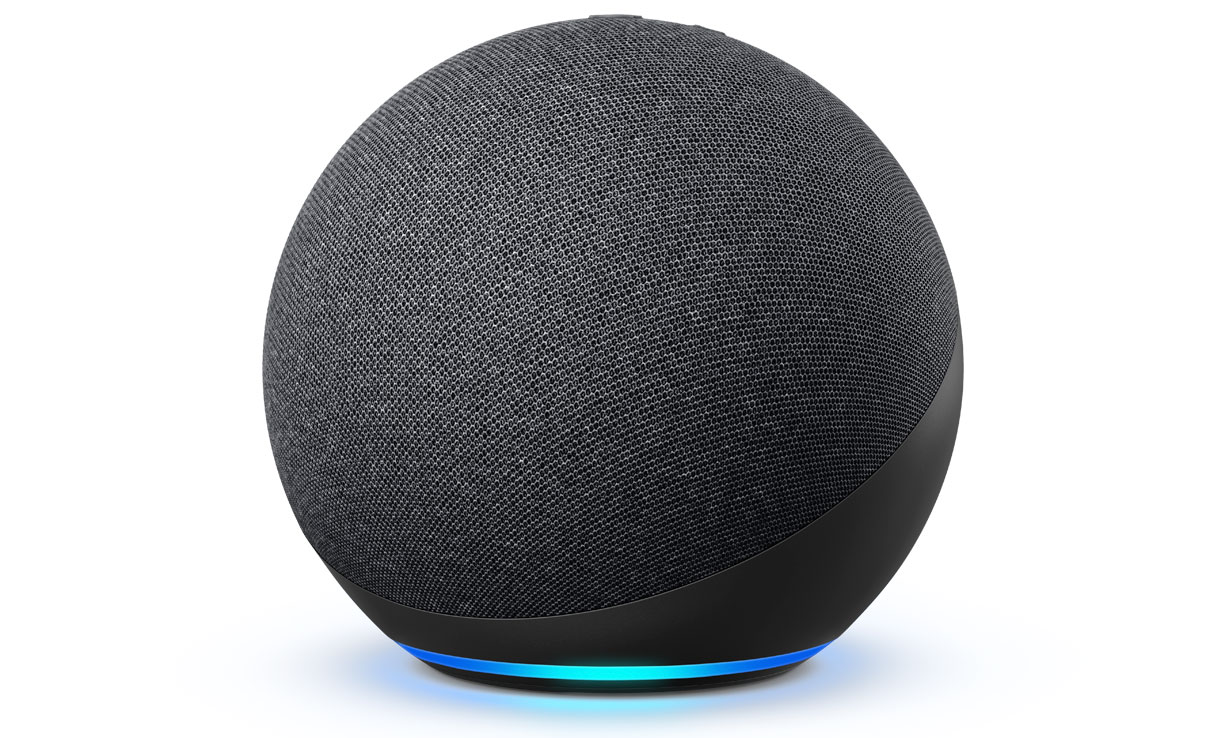 Looks aside, the technology powering the new Echo sets it apart from older members of the Echo family. Amazon claims the 4th-gen Echo ‘sounds significantly better’, thanks to a 3-inch woofer and dual tweeters. We’ve been told to expect ‘clear highs’ and ‘deep bass’ from the new Echo, but we’ll wait to hear from our own panel of audio experts to assess the reality behind these promises.

Like Apple’s pricier HomePod speaker, the Echo can adjust its audio output based on the acoustics of the room it’s in. In theory, that means it will sound better than the older Echo devices that didn’t have the same tech inside.

You can pair the new Echo with other Amazon products, such as the Fire TV, which might come in handy if you want a cinema experience on movie night. 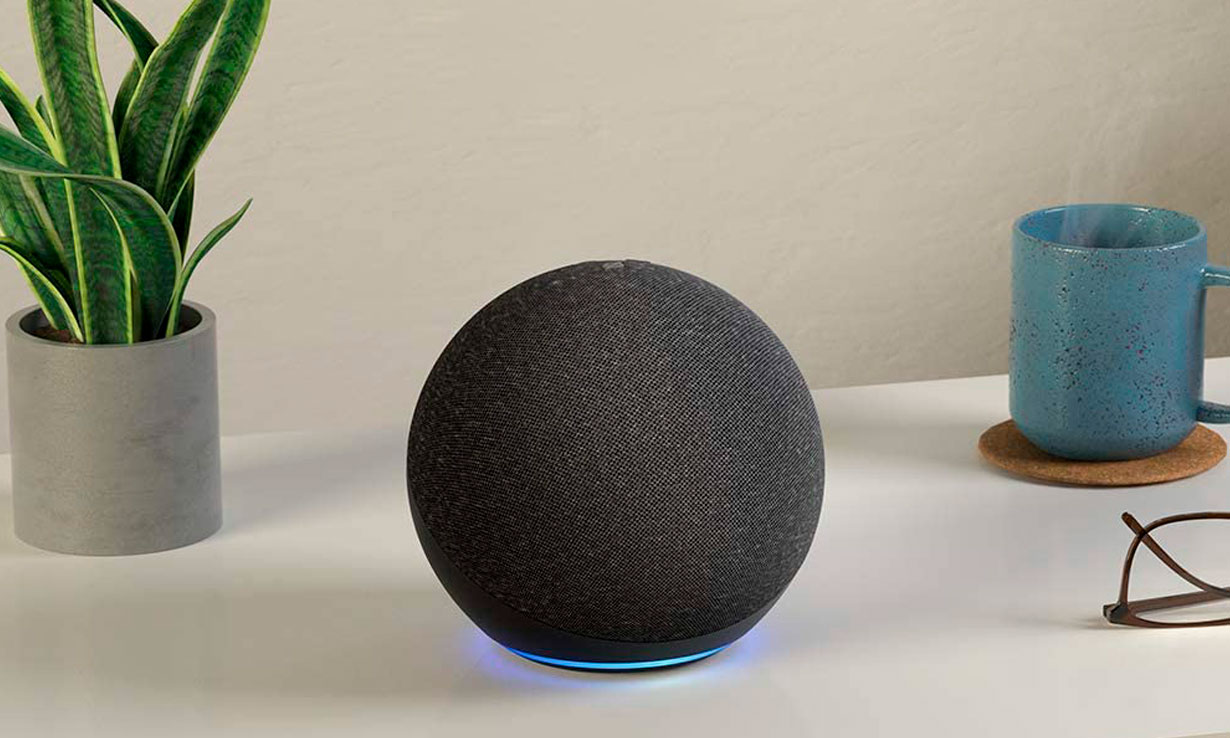 If you’re sold on Amazon’s new Echo, you’ll have to wait until 22 October to get your hands on one. It comes in three colours: Charcoal (dark grey), Glacier (white) and Twilight Blue (subtle blue).

Now that a new Amazon Echo model has landed, you might save yourself a tidy sum on its predecessor. Take a look at our full Amazon Echo (3rd Generation) review.

Google has had a busy month. As we reported in last week’s story on the latest Google launches, it used its latest product launch event to introduce new Pixel smartphones, another Chromecast streaming stick and the Google Nest Audio.

Nest Audio is a typically minimalist Google product, designed with a fabric finish and swapping physical controls for touch-sensitive zones. For example, tapping the centre of the speaker will play or pause your music, while pressing down on the top-right corner will turn up the volume.

The speaker is covered in sustainable fabric, and the ‘enclosure’ (fabric, housing, foot and some other smaller parts) is made from 70% recycled plastic. 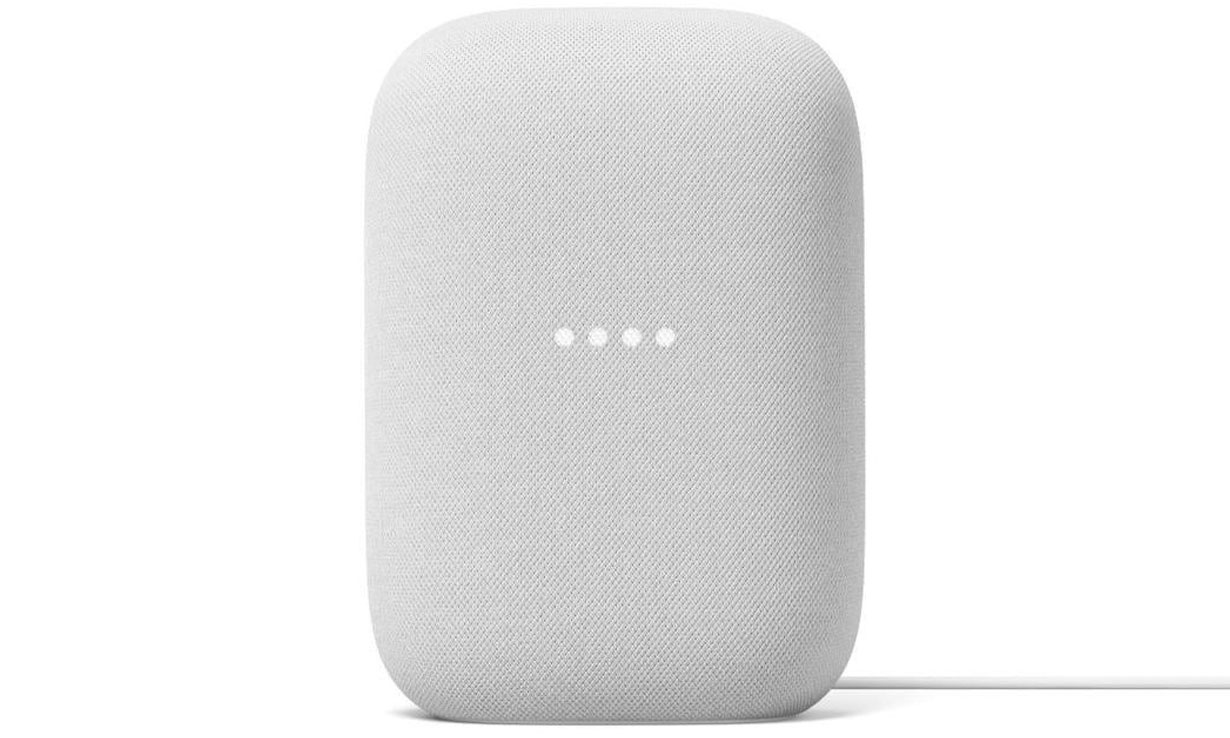 On the back of the Google Nest Audio is a power input and a toggle that lets you turn off the built-in microphone. This is a handy addition if you want to watch TV without your speaker waking up thinking you’ve asked it a question. It’s a good move from a privacy perspective, too.

Compared with the previous Google Home, Google says its new model is ‘75% louder’ with ‘50% stronger bass’. Like the new Echo, it’s intelligent enough to fine-tune the audio depending on what you’re listening to. If you’re sat back on the sofa enjoying an audiobook, for example, Google Nest Audio will make some changes behind the scenes that aim to make vocals even clearer.

Unsurprisingly, the Google Nest Audio uses Google Assistant to deal with your queries. By saying ‘OK, Google’, you can have the AI helper manage your calendar, load up your favourite Spotify playlist or control other smart devices such as Philips Hue light bulbs. 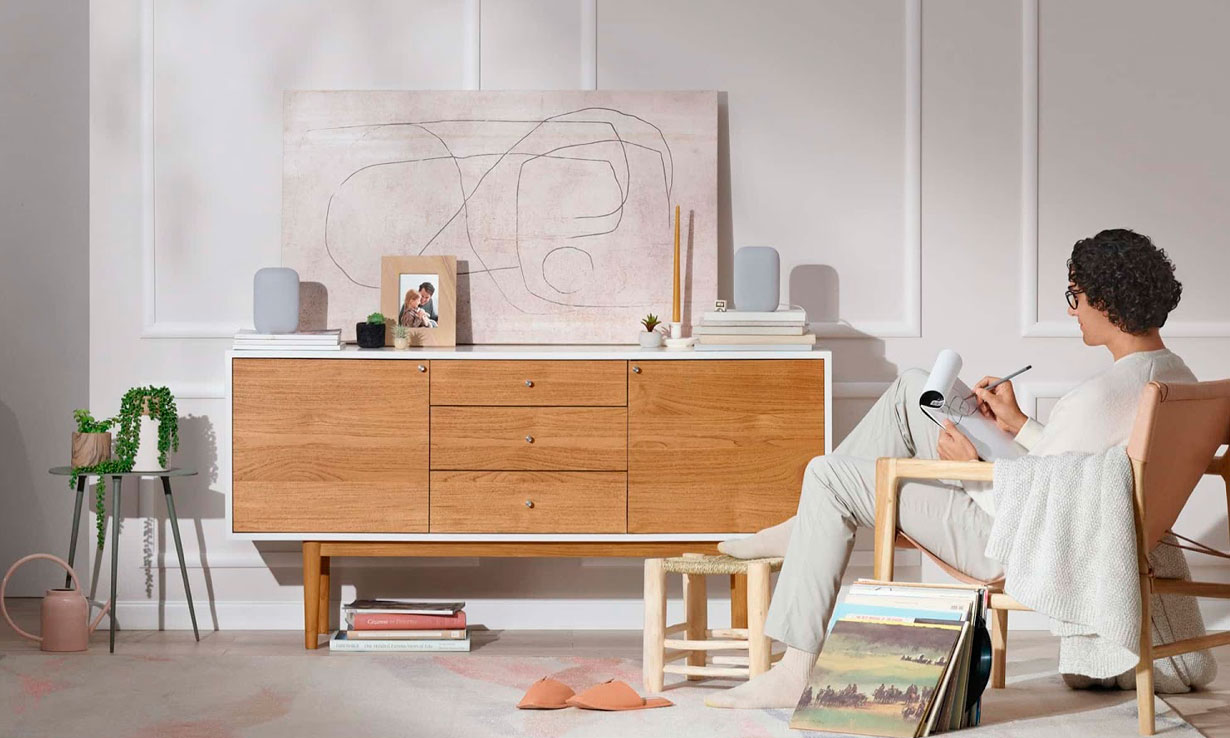 If you own more than one Google speaker, you can link them together to create a stereo pair. And Google’s ‘Ambient IQ’ tech will adjust the volume of Google Assistant depending on the level of background noise in your home. All of your Google devices can be managed through the free Google Home smartphone app.

You can grab the Google Nest Audio in Chalk (light grey) or Charcoal (black). It’s available from 15 October.

While we wait for the Google Nest Audio to reach the Which? test lab, check our previous Google wireless, smart and Bluetooth speaker reviews.

Choosing a smart speaker: what to consider

With so many smart speakers battling for your attention, thinking about how you’ll use the speaker and the features that are important to you will help you choose.

When buying a new smart speaker, you’ll want to think about:

To help you pick the perfect smart speaker for your home, we’ve put together an expert guide on how to buy the best smart speaker.