Dyson has launched its most advanced cordless vacuum cleaner yet, which the brand claims is capable of detecting, removing and categorising the hidden dust in your home for ‘scientific proof of a deep clean’.

If you ever wanted a real-time bar chart telling you exactly how many dust particles you’re sucking up – and what type they are – the V15 Detect is for you.

The V15 Detect, which is available at Dyson.co.uk, uses a laser to highlight dust on hard floors and a highly sensitive acoustic dust sensor to detect and record the types of tiny particles it sucks up.

It also comes with novel tangle-busting technology, which prevents hair wrapping round the brush bar on the turbo floor heads.

We’ll be putting the V15 Detect through our rigorous lab tests soon, but for now you can check out our expert first impressions in our Dyson V15 Detect first look review, or read on to discover what more the vacuum has up its sleeve.

As well as the V15 Detect, Dyson has launched three other cordless vacuums, geared towards the needs of both smaller and larger-sized homes. Keep reading to get the lowdown on the Dyson Outsize Absolute, Micro 1.5kg and Omni-glide.

Cordless vacuum reviews – see how rivals from Shark, Samsung and more measure up in our tests

Core features of the V11 range, including that crucial hour-long battery life, easy bin-emptying, digital display and auto-adapting suction, remain largely the same, but the V15 has several attention-grabbing extras that aim to give it the edge over rivals. 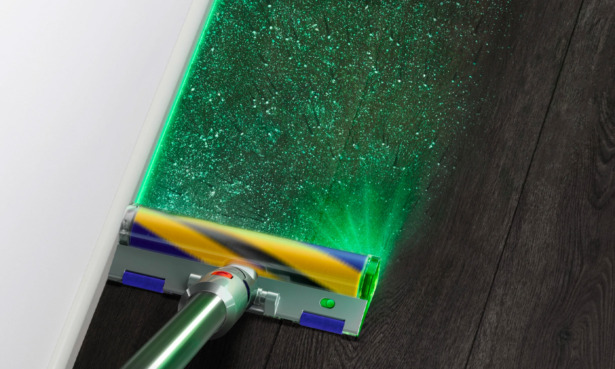 It’s previously been a gripe of ours that Dyson cordless vacuums don’t come with LED headlights – useful for highlighting dusty corners – while many cheaper rivals do.

We can’t level the same charge at the V15 Detect.

Not content with mere LEDs, the soft roller Slim Fluffy floor head comes complete with a green laser diode, levelled at a precise angle to illuminate the dust in your path.

Dyson says the laser is better at highlighting hidden dirt than LED alternatives – you can get our thoughts on this feature, based on having tried out LED versions too, in the Dyson V15 first look review.

Bear in mind, though, that this feature is only on the Slim Fluffy floor head, which is for hard floors only.

Dust sensor and real-time stats on what you suck up 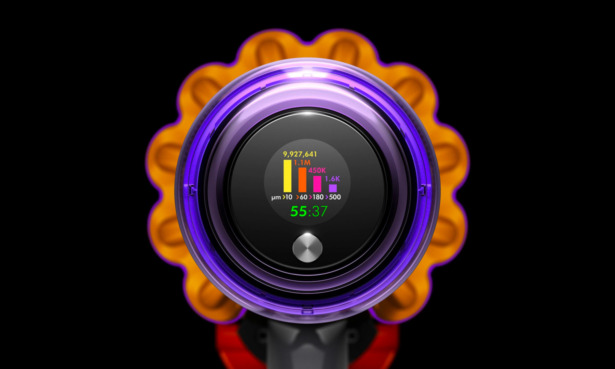 One for the nerds, this advanced acoustic dust sensor (known as a piezo sensor) tracks how much dust you suck up, and categorises it by size into a colourful bar chart on the digital display.

The sensor works by estimating the number and size of particles sucked up based on vibrations caused when dust hits the sensor, so you get real-time feedback on how dirty your floors are. It’s not just for fun, though, the vac uses this info to automatically up the suction power in dirtier areas.

It’s not the first time we’ve seen this feature. Tineco’s Pure S12 cordless vacuum pipped Dyson to the post with its dust sensor and digital dust display back in 2019, but this is the first we’ve seen that breaks down the different-sized dust particles. Whether this is necessary or a novelty for your weekly blitz, only you can decide.

Dyson says this feature also provides ‘scientific proof’ of a deep clean, as you’ll be able to tell when surfaces are allergen and microorganism-free; an understandable pitch, given the global circumstances.

But while maintaining cleanliness is an important aspect of good hygiene, it should also be noted that no vacuum – not even a Dyson – has magic sanitising powers. 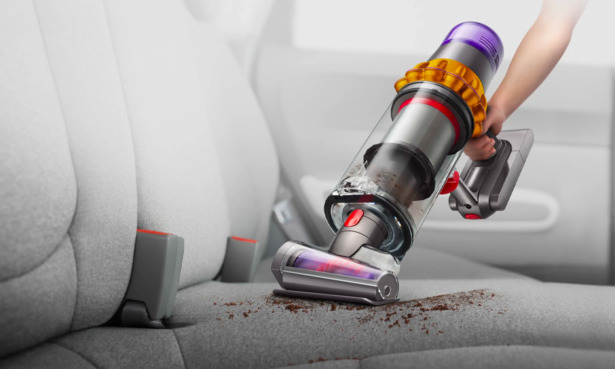 The V15 Detect also comes with anti-tangle technology. Like Shark and some other competitors, Dyson has looked to solve the problem of hair wrapping around the brush bar, which can clog the floor head and reduce suction.

Anyone who has had to clean a tangled brush bar will know, it’s a fiddly and unpleasant job. If you have several longer-haired residents at home you can end up needing to do it almost every time you clean, so this is a welcome addition to Dyson’s feature arsenal.

Typically, though, Dyson has taken a new approach to this perennial problem. The mini turbo tool – handy for swiping stray hairs on stairs and sofas – has a quirky asymmetrical conical brush bar which pushes hair to the end so it’s neatly sucked up. The High Torque turbo floorhead is fitted with similar tech, as well as a built-in comb which cleans off hair as you go. 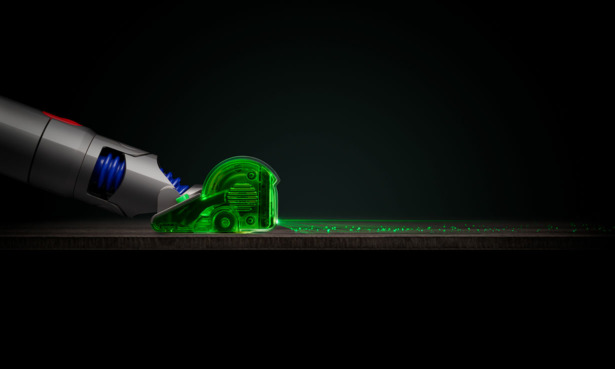 There’s no doubt the V15 Detect has plenty of fancy features to delight fans of futuristic-style appliances. And while some may be more of a passing novelty C depending on how much you really want to know about how clean your floors are – others look to be genuinely useful updates.

Being able to see the dirt in darker spaces and break free of brush bar detangling sessions are definite plus points. But there’s a slight sense of playing catch-up with rivals in an increasingly competitive market. We’ve seen (admittedly less ‘Dyson-y’) versions of some of these features on other cordless models already.

Refreshingly though, the price is on par with, or even less than some V11 models, making the V15 Detect a tempting proposition for those considering the upper end of the Dyson range.

On top of the V15 Detect, Dyson has unveiled three other new cordless models: the Outsize Absolute, Micro 1.5kg and Omni-glide.

These cater to those with larger or smaller than average homes, and each has its own unique extras:

It has a generous 1.7-litre dust capacity and wider floor heads, including a larger version of the laser-fitted Slim Fluffy floor head, to help cover large homes in less time. However, it doesn’t have the V15 Detect’s dust sensing capability.

The Outsize Absolute costs £699 from Dyson.co.uk and you can choose between red and gold – the gold model, the Outsize Complete, also comes with an extra crevice tool.

Like the V15 Detect, we’ll be sending it for a full lab test soon. But in the meantime, check out our Dyson V11 Outsize first look review to see what we made of a similarly sized Dyson.

At the opposite end of the scale, Dyson has also released its lightest ever cordless vacuum: the Micro 1.5kg. It costs £299 from Dyson.co.uk, about the same as the re-released Dyson V7 Absolute.

As its name suggests, the Micro 1.5kg weighs little more than a bag of sugar – in fact it’s so dainty, we’ve only tested one model lighter than it: the Ryobi One + R18HVF.

Although its feather-weight may come in handy when reaching up high or vacuuming the stairs, it means you have to settle for less dust capacity: the Micro 1.5kg can only hold 0.2 litres of dust at a time.

We’re also keen to discover what effect the Dyson’s smaller size has on its cleaning power when we send it to the lab next month.

Dyson has also announced the intriguingly named Omni-glide. Like the Micro 1.5kg, it’s designed for smaller homes, but it isn’t as light or as cheap (it will cost £349 when it launches).

It has a multi-directional floor head which, according to Dyson, vacuums equally well in all directions. In theory, this should suit homes with tight corners and plenty of nooks and crannies, where vacuuming in a straight line just won’t do.

It’s also the first of the Dyson cordless range to be button operated rather than trigger operated – this is something we’ve long called for, as having to hold down a trigger for the entire time you vacuum is uncomfortable, or even impossible for some.

We’ll be testing the Dyson Omni-glide soon, as well as bringing you our initial impressions in a first look review.

*Prices correct as of 26 May 2021. Originally published on 16 March 2021, but updated to include our first look review and the latest launch details