Door-to-door fraudsters have adapted their tactics to use the pandemic to their advantage, Which? has found.

Many of us were appalled in January by the case of a 92-year old woman in London who had been stabbed in the arm and conned out of £160 by an alleged vaccine scammer.

But Which? research suggests this wasn’t an isolated incident.

While the number of reports of doorstep fraud have remained consistent over the past two years, at around 300-500 reports each month, with £18.7m lost over 2020, Action Fraud believes many of these offences are underreported.

This may be because victims don’t believe they will get their money back or fear reprisal, and also because the elderly are the most targeted.

Victims are far less likely to get their money back than victims of online fraud, and can suffer lasting psychological and health effects as a result.

Here we explain how to keep yourselves and your loved ones safe.

Sign up to free Which? Scam Alerts and outsmart the scammers

Stung by a fake support group

Although doorstep fraud plummeted during the initial most severe lockdown, along with incidents of other crimes, some fraudsters were still able to take advantage.

Which? member William, 81, lives alone in Western-super-Mare, a 40 minute drive from his closest relatives. He and most of his friends are over 70, and were encouraged not to go out when lockdown began.

Just a week later he was visited at his home by two volunteers from a ‘Covid support group’ who offered to do shopping and errands for him while he was shielding.

‘There was a lot of confusion about lockdown, I didn’t know whether I was safe to be in my garden, let alone go to the shops. ‘I’d seen in the local paper that volunteers were out helping people in the area. I was grateful for some friendly faces offering help,’ William said.

He gave the young couple £200 cash over two visits for food and home essentials. But he never got his shopping.

‘Realising these people were out to get me made a dark time even darker for me to be honest,’ he told us. William now doesn’t open the door to anyone unless it’s a prearranged visit from someone he knows. His son has also since fitted a smart doorbell that films anyone who drops by.

We’ve heard from other victims across the UK who have been targeted by fraudsters claiming to be from local NHS services offering fast track testing and vaccines, collecting donations for fake charities, selling vitamin pills that ‘protect against’ Covid-19.

NHS services across England, Wales, Scotland and Northern Ireland continue to stress that all testing and vaccine services are free of charge, and nobody will ever turn up at someone’s home without warning.

Those being vaccinated at home will likely be contacted in advance by their local NHS service, or regular district nurse, to arrange an appointment.

Another explanation for the rapid resurgence in reports halfway through the first lockdown could also be that victims were confined to their homes, making them both a captive audience for these crimes but also more likely to report than usual.

We heard about an 89-year-old in York who was pursued by crooks over a number of weeks. They stole small amounts of cash and her payment card details, ordering high value electronics to be delivered to her house and then collecting them.

The victim’s only relatives, her nephew, lives over 100 miles away and unable to visit. They only realised something was wrong when her doorbell rang during an evening phone catch up. When she was asked who it was, she mentioned it was ‘just those builders again who still haven’t started the work yet.’ This rang alarm bells, and the police were contacted.

Fortunately, because most of the money was paid using her bank card, she was able to get most of her money back, but it took several months for her bank to investigate and reimburse her.

Age UK says elderly and vulnerable relatives are at higher risk of being targeted by scams in this way. Older victims of doorstep fraud were found to suffer a faster decline in health as a result.

However, anyone is at risk of being caught out by increasingly sophisticated schemes, and once successfully targeted, are likely to be paid reoccurring visits.

It’s difficult to turn someone away when they appear unexpectedly and face to face. Scammers know this and take the chance to build rapport with their victims, or intimidate them.

Since face masks became commonplace, they now have an excuse to conceal their identities too.

Victims also spoke of their concerns about coming to physical harm, the fear of access being gained to their homes, and the potential consequences of fraudsters knowing where they live.

Over a third of Which? members surveyed who said they’d had an unsolicited door knock said it was someone offering home improvement services.

Part of the problem is that it’s considered the norm for traders to be paid large sums in cash. When two landscapers turned up at Lucy’s* (name changed) front door in Maidenhead last July, offering to tidy up her front garden, she didn’t think it was unusual that they’d asked for the money up front.

‘They said they’d been working on my neighbour’s garden and thought mine looked like it could do with a bit of TLC. It was funny because I’d recently been admiring my neighbour’s new front garden.

‘Apparently work had dried up a bit for them recently and they thought there was no harm in asking. I actually felt bad for them,’ Lucy explained.

They showed Lucy their business’s Facebook page which had over 100 positive reviews. It seemed a convenient option since she was busy working from home while homeschooling her two children.

She asked the traders if they could also build some decking in her back garden so her family could have more space to play in lockdown. They took a £2000 cash deposit from Lucy, milled around the front of the house for a couple of hours. Then they headed off to buy supplies, but never returned.

Later Lucy found out they weren’t the same traders that had worked on her neighbour’s garden. They were opportunistic fraudsters.

Lucy has given up hope of getting any money back, because cash payments are usually untraceable – and usually impossible to recover.

If your debit or credit card is used to make a purchase without your authorisation, your card provider is legally required to refund you.

And if you paid by card for services or products that weren’t provided, you may be able use Section 75 or chargeback rules to get a refund. Even mistaken bank transfers to crooks may be recoverable under the Contingent Reimbursement Model.

In 2020, just under half of the money lost to bank transfer scams was returned to customers, according to banking association UK Finance.

Doorstep scam victims who paid in cash don’t have access to any of these options.

Feeling helpless, many people we’ve spoken to have taken matters into their own hands, posting warnings and security camera footage online in an attempt to warn their friends and neighbours.

In Sheffield, fraudsters have been visiting homes across the city claiming to be selling subscriptions for deliveries of milk from a local dairy farm, known for its ice cream parlour and colourful branding. But the farm doesn’t promote its business by door knocking. It has received dozens of calls and messages from residents across the city raising concerns about foul play.

‘It’s just staggering. Nothing like this has happened to us before,’ farmer and owner of Our Cow Molly, Ed Andrew (pictured below), told us.

He said he’s heard from people almost daily in recent weeks who had concerns that something wasn’t quite right, or people who realised it was a scheme too late. 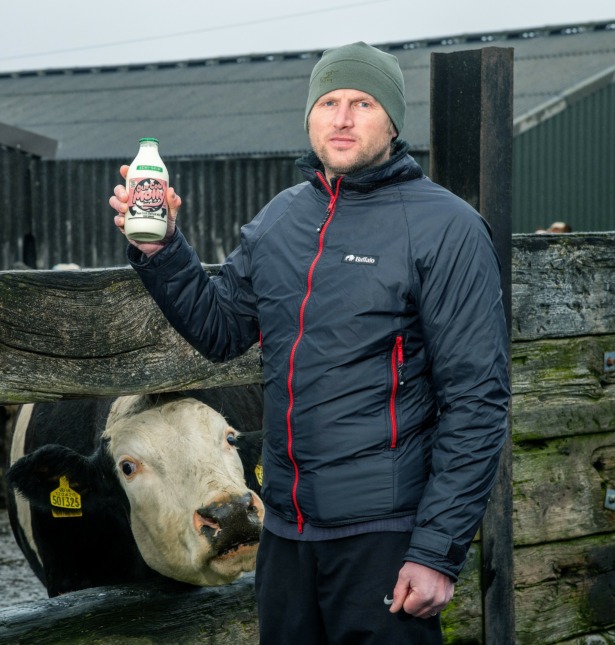 ‘It’s happening now because people want everything delivered, and around here people are passionate about supporting local business. Those behind this are taking advantage of people’s good intentions to make money, and misrepresenting my products and business.’ he said.

As well as posting warnings on Facebook and Twitter, Ed has contacted the police, Trading Standards and his local MP.

‘Sheffield is a big city. It’s only because we have such a loyal customer base and we’re really involved in the community that we know this is happening and have been able to put warnings out.’

Jo Smith (pictured below, left) is a volunteer with her village community group Friends of Ruabon, in Wrexham, which has recently trialled the Neighbourhood Watch Communities that Care programme.

Jo and her fellow volunteers have learned how to tackle fraud in the community. 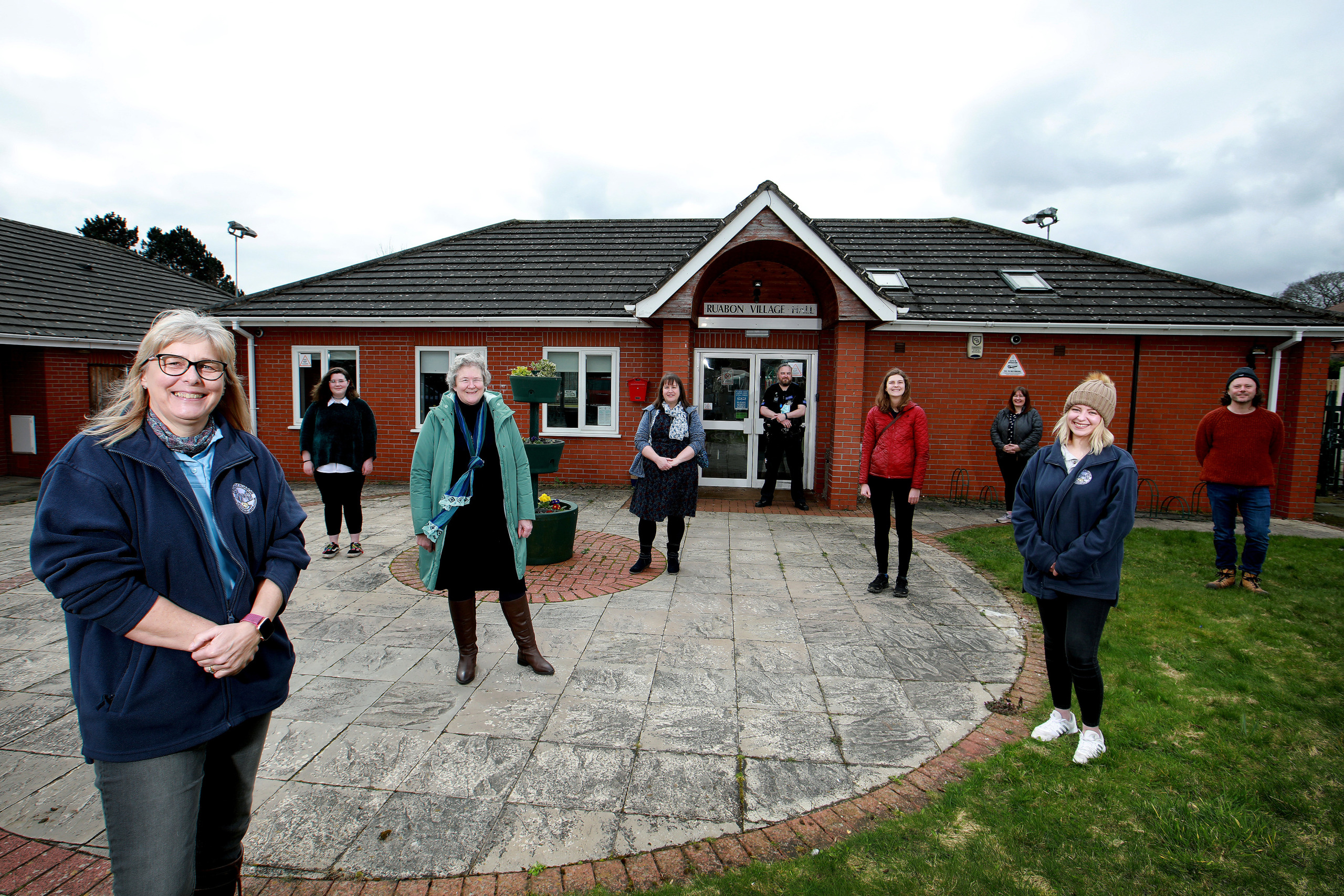 They hand out scam prevention advice and reminders to residents with deliveries of afternoon cream teas and care packages. Jo’s mother was the victim of a cold call scam a couple of years ago, which made her keen to raise awareness.

‘Just having a quick chat with someone from the end of the drive about what’s been going on with them over the past couple of days makes a difference too.’ she said.

Jo explained that social media and group messaging apps have also been invaluable for alerting people to suspicious callers. ‘One positive thing about this pandemic has been that neighbours who never knew anything about each other before have become friends. They’re more aware of who is around them and take an interest when things aren’t quite right.’

Neighbourhood Watch is looking for Communities that Care coordinators to roll out the scheme nationwide. Volunteers can access free online training and toolkit packs to give out to residents in their area, containing advice, door stickers, and helpful contacts.

Protecting yourself and others from doorstep scams

It is possible to protect yourself and the people you care about from these kinds of scams. Deterrents like CCTV cameras and ‘no doorstep sellers’ stickers in the window really are effective, according to Trading Standards.

Reporting scams or attempted fraud is important for warning others, and to inform the police. You can report to Action Fraud or if you’re in Scotland, you can call Policing Scotland on 101.

The same goes for traders engaging in aggressive doorstep selling. Even if you turn them away, someone else in your area might not feel able to.

You can call Citizens Advice to report to Trading Standards, or visit its website where you can use the reporting tool to share what’s happened. The information you share will be passed onto the local Trading Standards office.

If your local area is plagued by door knockers, you can also apply to your local council to become a No Cold Calling Zone. You could also consider installing a smart doorbell.

We’ve all been watching what’s going on in our streets more closely than usual since we’ve been stuck at home. Use this as a chance to look out for those you live close to who might be at risk.