Fraud has reached record levels during the pandemic as Which? analysis of Action Fraud data shows.

There were 413,553 reports made to Action Fraud, the fraud and cybercrime reporting centre for England, Wales and Northern Ireland, between April 2020 and March 2021 – up 33% year on year. More than £2.3bn was lost by victims as a result

Here, we delve into the data to explore which categories of fraud have been growing the fastest, which cost victims the most money, and how fraud varies across age groups and regions.

What are the biggest threats?

We’ve aggregated Action Fraud’s data into 13 groups to make it easier to compare the biggest types of fraud. The sum of our categories doesn’t match the total volume of fraud reported, as a third of fraud reports went uncategorised last year.

By far the most common type of report received by Action Fraud in the past year involved online shopping and auction fraud, accounting for one in four of all incidents reported.

With lockdowns leading more of us to shop online than ever before, it’s no surprise that online shopping and auction fraud also saw one of the biggest year-on-year increases in reports (up 65%).

The second most common type of fraud was advance fee fraud. One of the most notorious examples is an email from a stranger in another country (normally in distress) asking for financial help and to transfer money. You’re promised a rich reward once it’s done, which never materialises. Dating scams, loan fraud and recovery fraud are all variants of advance fee fraud, but we’ve separated them out in our data because of their size.

These figures are likely to be just the tip of the iceberg. The Office for National Statistic’s Crime Survey for England and Wales (CSEW) estimates that there were more than four million incidents of fraud in 2020, meaning that only around 10% of offences were reported to Action Fraud.

What are the fastest growing threats?

The category that saw the biggest year-on-year increase is phone fraud (up 83%). This includes phone calls or SMS messages from unknown numbers, which cost up to £15 to call or £1.50 to text back.

Fraudsters have taken advantage of our changing habits, most recently leading to a surge in texts alleging to be from courier and delivery firms asking recipients for admin fees to retrieve packages.

Another growing concern is dating fraud, where scammers set up fake online profiles on social media and dating sites to trick people into forming relationships. Once they have the person’s trust, they will fabricate a reason to ask them for money.

Dating scams accounted for just 2% of all incidents reported to Action Fraud over the past 12 months, but they have been steadily growing. It’s also one of the most costly scams, with the average victim losing almost £10,000

How does age affect your fraud risk?

Your own risk is less to do with your age, but rather the kind of activities you’re carrying out online. However, if those activities align with your age group, the data can act as a good indicator as to the types of fraud you have a higher chance of falling victim to.

According to Action Fraud’s data, younger people submitted more fraud reports in the past 12 months than older people. In fact, almost twice as many reports came from people aged 20 to 39 (43%) compared with over-60s (22%), despite them accounting for similar proportions of the UK population.

A greater online presence means that young people are at much higher risk of frauds that include digital elements: online shopping; online banking; and ticket fraud.

Conversely, over-60s are considerably more vulnerable to computer fixing fraud, as tech literacy tends to be comparatively lower. Meanwhile, over-80s are disproportionately likely to be victims of door-to-door fraud.

You might expect your fraud risk to be the same wherever you are in the country; if you’re doing something online, you should be at no greater risk being in central London than you are in rural Wales. 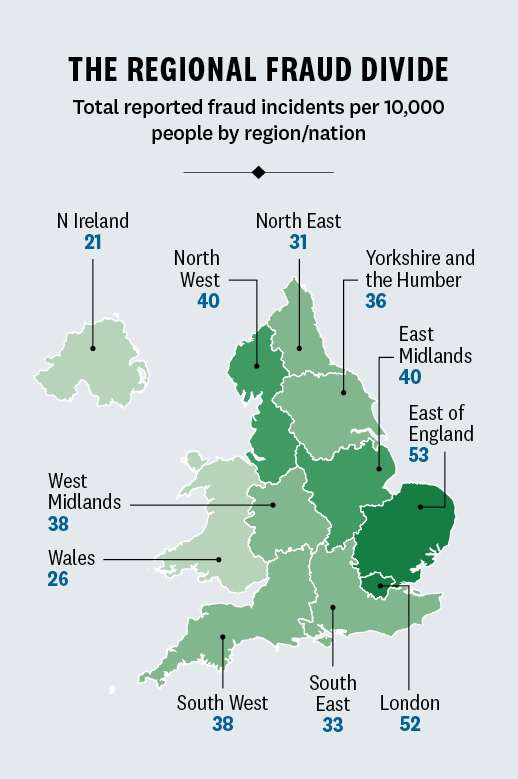 But Action Fraud figures shows a disparity in reporting rates between regions. People are around twice as likely to report being a victim of any type of fraud in the East of England (1 in 187) as in Northern Ireland (1 in 476) or Wales (1 in 380).

In fact, the East of England and London are the hotspots for 12 of our 13 fraud categories. The exception is mandate fraud, which was most reported in Yorkshire and the Humber. The lowest reporting rate for all 13 categories was in either Northern Ireland or Wales.

One reason for this may be the proportion of people online. According to the Office for National Statistics, Northern Ireland (12%) and Wales (10%) have higher proportions of adults saying that they haven’t used the internet in the past three months.

The North East – the English region with the lowest rate of reporting to Action Fraud – also has the highest proportion of people saying that they haven’t used the internet in the past 90 days (12%) in England. Meanwhile, London (5%) has the lowest proportion offline. The correlation between fraud levels and offline population isn’t perfect, but it’s enough to suggest that it plays a role.

More needs to be done to tackle fraud

Which? believes that industries, including tech giants, banks, telecoms providers, as well as regulators and the government, must take more responsibility for preventing victims from facing the devastating consequences of scams.

We’re calling for the government’s Online Safety Bill to give online platforms a legal responsibility to identify, remove and prevent fake and fraudulent content on their sites – including the adverts often used by fraudsters as the basis for online shopping scams.

How to reduce your risk of falling victim

While scammers will use subtly different tools and techniques to deceive their victims, there are some general tips you can follow to help reduce your risk of becoming one:

For more information on how to protect yourself from scams, as well as what to do if you fall victim, visit our scams advice guides.

You can help us protect others by reporting your experience of a scam using our scam sharer tool. 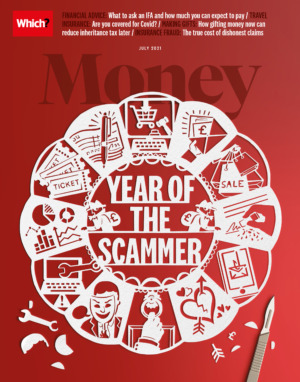 Each month, we publish investigations, news and advice features covering all areas of money.

Join Which? Money today and take control of your finances