Complaints against driving instructors have risen sharply in recent years with worrying trends around inappropriate behaviour and misconduct, Which? has found.

While often seen as a significant moment in the journey to becoming an independent adult, having a good experience of learning to drive can be a gamble.

According to a recent Which? survey three in five (59%) learner drivers had problems with their driving instructor*, and worryingly one in 10 (10%) experienced issues of inappropriate behaviour.

And official complaints to the Driver Vehicle Standards Agency (DVSA) have risen by 39% since the period of April 2018 – March 2019.

Here, we look at the types of problems faced by learner drivers and how to make a complaint if you’re not happy with the service you’re getting.

One in five unhappy with the quality of driving lessons 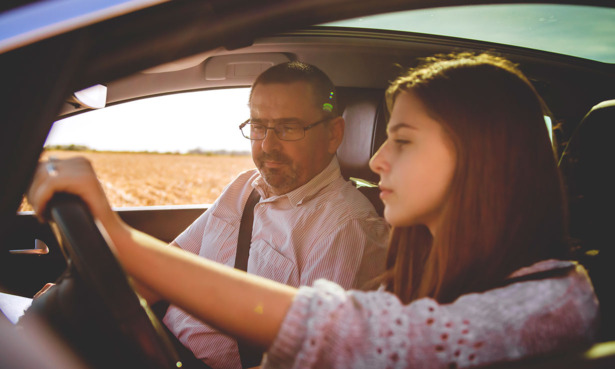 The DVSA estimates it takes the average learner driver 47 hours of tuition. The cost of lessons varies around the UK but a learner driver can expect to pay somewhere between £25-£35 per hour.

Despite the expense of it all, learners are not always getting the service and professionalism they should expect.

What kind of driving instructor actually has vacancies right now? Ones prone to xenophobic rants, apparently. He knows I’m an immigrant, but I guess I’m not “that kind” of immigrant. If I quit, I’ll be house-bound til god knows when, and he’ll replace me in a second. Argh.

We found that the most widely reported problem was with the quality of lessons, with one in five (20%) of participants unsatisfied with the standard they received.

19% had charges or billing issues or ran into problems when trying to book lessons. And 18% weren’t happy with the customer service they received.

Worryingly, one in ten participants who had problems with an instructor said they had experienced inappropriate behaviour.

Approved Driving Instructors (ADIs) are regulated by the DVSA. Unfortunately, our findings on inappropriate behaviour match the figures shared with us by the DVSA.

Between April 2020 – March 2021 the DVSA received 912 complaints about driving instructors, one in ten complaints were about indecency, sexually inappropriate behaviour or harassment.

My daughter suddenly said one night ‘Do driving instructors need to touch your leg? It’s really distracting and he keeps doing it’
Trying to find a replacement female driving instructor was interesting- huge long waiting lists.

There are over 38,000 driving instructors on the DVSA’s register. While the majority will have their pupil’s best interests at heart, the nature of one-to-one tuition creates vulnerabilities for both the instructor and pupil. This has led to some campaigners calling for lessons to be recorded.

In the UK, the legal age to learn to drive is 17. For most learner drivers, this will be one of the first experiences of tuition outside of a school environment.

Problems related to harassment or sexually inappropriate behaviour should be reported to the police. A spokesman for the National Police Chiefs’ Council said:

‘Police urge anyone who is the victim of harassment or sexual assault to come forward at the earliest opportunity and report their concerns to officers, so we can work to keep them safe and offer suitable support services. You can contact your local police by calling 101 or going online to police.uk.’

‘They listed my complaint as “feedback”’ 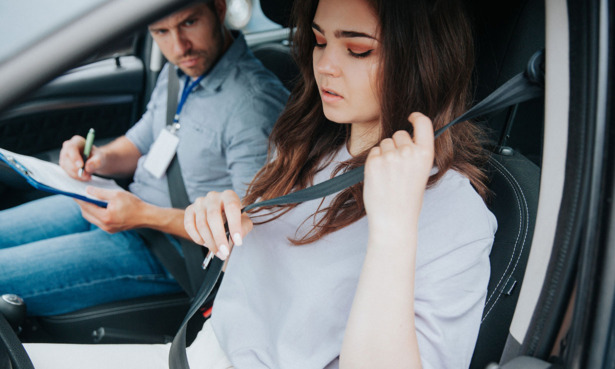 Helen George first booked driving lessons with RED four years ago as she thought as a big company, they were bound to be reputable.

The first instructor she was assigned asked her whether she had a boyfriend within the first 10 minutes of their first lesson.

‘I batted it away but it became regular chat, to the point where sometimes I knew that I’d been speeding and he would say it was fine. He was not teaching me or critiquing me because his agenda was different,’ she told us.

After the second lesson, Helen asked RED for a new instructor. But unfortunately she had another concerning experience.

‘It became very clear that his views were not in line with mine,’ she recalled. ‘There were so many rude comments about female drivers, such as “look at that woman, that car is far too big for her”. These sorts of comments came thick and fast, more than anyone would feel comfortable with, especially a woman.’

‘If I was doing well he’d try and reward me with a chocolate bar or some sweets. I said no and he responded saying I might be on one of those “women diets”. The way he was trying to reward me for being a good girl felt really odd,’ she explained.

At this point Helen contacted RED to complain. ‘I was met with so much resistance,’ she told us. ‘The first woman I spoke to didn’t understand my point and it was like she thought I was being silly. I said I wanted to speak to someone higher up to log a complaint but she refused. Her point blank refusal to escalate it to a complaint because she didn’t understand my problem was so glaringly shocking.’

Helen eventually spoke to another member of staff who escalated the complaint but said there was no in-house system of sexism training for instructors. ‘I wanted them to speak to the drivers and talk to them about what had happened and try to educate them. My whole rationale was to educate rather than to blame,’ she added.

Helen is concerned younger drivers may find themselves vulnerable to this type of behaviour, without the confidence or knowledge of how to complain. ‘My experience exposed a whole lack of education and safety. RED is a huge company that works across the country so I was shocked at how archaic their system seemed.’

‘Red were so unwilling to hear me out,’ she said. ‘They kept saying they carry out initial checks on instructors with the DVSA. They were very much resolving all blame and there was no responsibility or willingness to address the issue.’

Helen asked for a refund and eventually secured her money back for the remaining lessons. ‘It wasn’t an easy process, I had to ask a few times,’ she said.

She’s since found an independent instructor who she is happy with: ‘He’s not showing any of the same traits and it’s restored my faith,’ she said.

We contacted RED Driving School about Helen’s experience and a spokesperson told us: ‘We take allegations of inappropriate behaviour extremely seriously and are investigating fully. All RED instructors are required to complete attitudinal training and are DBS checked before they start working with us.

‘We expect all our staff, instructors, partners and suppliers to act in line with our core values of operating to a high standard in all that we do and always with the highest level of integrity.

‘Instructors must sign and abide by the DVSA’s professional code of practice for driving instructors, and this requires the individual to comply with the law, keep clients safe and treat them with respect. In the franchise agreement, we have also included a clause which requires instructors: “Not to do anything that would bring the reputation of either himself or herself or the School into disrepute or which may impact on his or her reputation or fitness to carry on the profession of a driving instructor”.

‘The safety and security of those who use RED Driving School is of the upmost importance to us and we fully investigate every complaint made to the business.’

Is the DVSA doing enough? 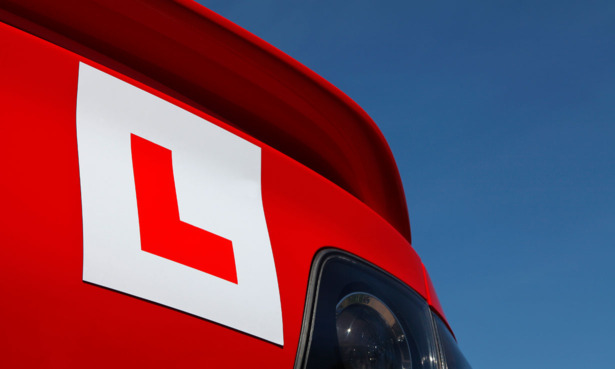 Our research found that when people experience a problem with a driving instructor, only half go on to make a complaint, with older learner drivers being the ones most likely to complain.

In 2018 the DVSA unveiled a new code of conduct, outlining various expectations of ADIs and specifically addressing issues around personal conduct and business dealings, advertising of services and settling disputes with pupils.

Writing about the release of the updated code in 2018, the ADI Registrar Jacqui Turland said: ‘ADIs are in a position of considerable trust. I know the vast majority of you have the highest of respect for that trust and conduct yourselves with the utmost professionalism.

‘However, there are some people who don’t have that same level of respect. They cause the public to question the professionalism of instructors and threaten to damage the reputation of the profession. They perpetuate outdated stereotypes and caricatures.’

Following the DVSA’s code is voluntary. However, the DVSA advises that failure to meet the requirements of the code may result in a registered driving instructor being removed from the register.

We shared our findings with the DVSA and Jacqui Turland, ADI Registrar, said:

‘DVSA takes the safety of learner drivers extremely seriously and will thoroughly investigate any complaints, involving the police when necessary.

‘The vast majority of instructors have the highest respect for the trust pupils place in them, and conduct themselves with the utmost professionalism.

‘We encourage pupils to report any incidents. Our complaints procedure is open for anyone to use, and we will continue to listen to feedback regarding this process.

‘Instructors found to be threatening the safety of learners will be removed from the Approved Driving Instructor register and stopped from teaching.

‘We also take the initial training and development of instructors very seriously. Making sure pupils are given a high standard of tuition, that enables them to drive independently by the time they sit a driving test, is of upmost importance. We regularly check-in with instructors to assess the standard of training provided, and highlight any areas for improvement.’

What to do if you have a problem

Which? is encouraging anyone who has experienced a problem with a driving instructor or school to make a complaint.

Failing to provide an expected level of service, such as not arriving on time, cancelling at last minute, or making you wait months on end for a lesson isn’t acceptable and you should ask for your money back.

If your refund request is ignored you can try claiming back your money through a Section 75 claim if you’ve paid via credit card or via chargeback if you paid via debit card.

Issues related to sexual harassment, misconduct or inappropriate behaviour should be reported to the police by calling 101, or 999 in an emergency.

If you feel you’ve been discriminated against by a driving instructor or school, you do have rights under the Equality Act 2010 to take action and protect yourself.

You can complain to the DVSA if you are not happy with the conduct of the driving instructor or the quality of the lesson and service you’ve received. The DVSA can investigate the issue and speak to the instructor or driving school, but it advises that it can’t recover your money.

How to find a driving instructor

The Covid-19 pandemic has led to large backlogs of learner drivers waiting to book lessons and tests. While the delays will be frustrating, it’s important to ensure you find a good, qualified and reputable instructor to learn with.

Here are some tips on how to find an instructor: