It’s all too easy for Facebook business listings to be manipulated by fake reviews, a Which? investigation has found, after we went undercover to purchase a range of recommendations and page likes that easily found their way onto a fake business.

Our latest research into fake and misleading reviews has shed new light onto the unscrupulous tactics businesses could use to fake their way to five stars. 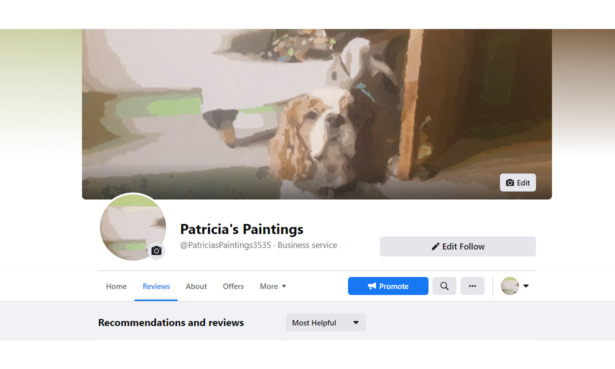 Which? surveyed 2,000 UK adults about their experiences with review sites between 28 May and 1 June 2021. Around two fifths (39%) said they had used review websites or apps over the past 12 months to look for local trade businesses, and Facebook was the most used, by almost half of people (47%).

We set up a fake artistry business called Patricia’s Paintings on both Google and Facebook, and set out to discover just how easily Facebook’s recommendations can be manipulated to trick even the savviest online shoppers.

Posing as the owner of Patricia’s Paintings, we approached several review selling websites – most of which offer a broad range of fake review ‘services’ for a range of platforms.

Based on their advice, we bought a selection of 93 fake reviews and 500 page likes to publish on the business’ page.

Read our guide on how to spot a fake review to stay one step ahead.

What the fake review sites told us

While undercover as the owner of Patricia’s Paintings, we tried to find out more about the nature of the services on offer from the review websites.

Goldstar Marketing told us it uses ‘real reviewers’ who earn money for writing recommendations for its customers’ businesses. It also said it has received 10,000 orders from ‘small and large’ business owners worldwide for its review packages.

We asked App Sally if Facebook could shut our business page down if it discovered we had been paying for recommendations. It assured us the reviews provided were ‘real, legit, and non-incentivised,’ and promised to ‘drip feed’ the recommendations we purchased when it came to publishing because it would ‘help avoid getting [the reviews] removed by Facebook’ for suspicious activity on our account.

Fast Face Likes encouraged us not to be concerned about Facebook noticing we were purchasing recommendations, going as far as to say Facebook has ‘never’ found out any of the companies it has sold reviews had done so.

Online Boost Up said its recommendations are published from ‘real profiles’ and it has helped ‘lots of businesses’ like ours. Online Boost Up also sent us PayPal instructions to pay for the reviews, emphasising we must not mention the company’s name when sending the money, and it made an attempt to charge us more than originally quoted.

When Which? told Red Social we were concerned about Facebook shutting down our business’ page, it said it has worked on ‘thousands of Facebook recommendation campaigns’ and had never encountered a case where a client’s page has been penalised by [buying] from the service. ‘Usually most of our Facebook recommendations clients purchase the service since they’ve received a couple of negative reviews from other people,’ it said.

How our fake business was promoted 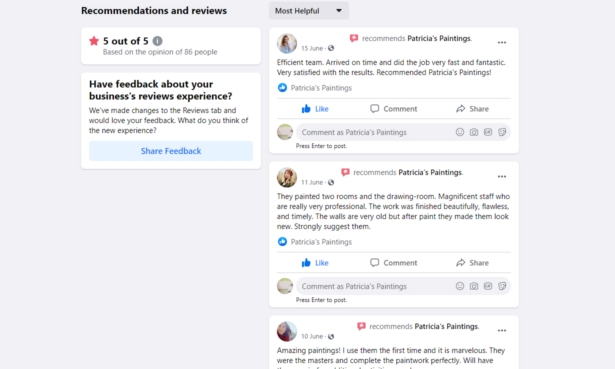 Within a few short weeks, all 93 reviews we bought had landed on Patricia’s Paintings Facebook page, giving it a 5/5 stars rating.

Our phoney recommendations ranged from top-notch reports of our ‘efficient team’ who arrived promptly and did the work ‘very fast’, to another reviewer who said their walls are ‘very old’ but after Patricia’s Paintings got to work, we made them ‘look new.’

Others posted emojis, such as hearts or thumbs up, on our page.

The profiles used to write our reviews

The majority (76%) of the profiles reviewing our business were male. Almost all (97%) were from Bangladesh, 2.2% were from the US and 0.2% from each of Portugal and Oman.

The impact of fake reviews on customers and companies

While many businesses work hard to provide the level of service that leads to genuine five-star reviews, our research shows how others opt to take shortcuts to build a top-notch customer rating.

We heard from one Facebook user who was left frustrated when they were enticed to make a purchase by a company’s 4.9/5 star rating.

They bought a mask from the seller based on its top rating, and were let down by its poor quality. The shopper said they would never buy anything from the company again.

The customer told Which? they had purchased around 100 face masks since the coronavirus pandemic began, but this £23 one was the most expensive and the only one they ‘couldn’t wear’ because of how uncomfortable it was. 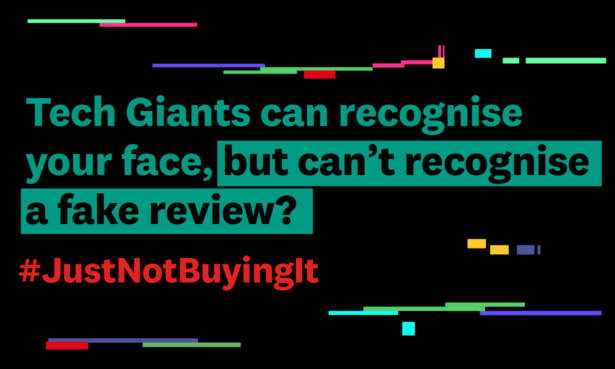 Which? calls for stronger steps to stamp out fake reviews

Facebook’s community standards state that users cannot post ‘fake and misleading user reviews or ratings’, but as with other platforms prohibiting this sort of misleading activity, it still seems all too easy to bypass their checks.

Which? has launched a new campaign to make tech firms take responsibility for the harms taking place on their sites, where a lack of legal responsibility has allowed unscrupulous individuals or businesses and criminals to sell unsafe products, mislead consumers and target potential scam victims with ease. Despite the sophisticated technology at their disposal, the voluntary solutions put forward to date to tackle these problems by the major online platforms have been inadequate.

Read more about our #JustNotBuyingIt campaign, and sign our petition.

Which? believes the government must step in with laws giving regulators and other bodies the powers they need to make online platforms take responsibility for the serious consumer harms on their sites. This also comes as the Competition and Markets Authority (CMA) opened a formal investigation into fake reviews this year over concerns that not enough is being done to tackle the issue.

Rocio Concha, director of policy and advocacy at Which, said: ‘Our investigations continue to expose how easy it is for the fake reviews industry to infiltrate online platforms like Facebook and avoid detection, despite the incredibly sophisticated technology these companies have at their disposal. This is increasingly worrying as people continue to rely on these sites to find local businesses and it raises big questions about whether consumers can trust the reviews they see online.

‘The CMA should strongly consider whether Facebook should be brought into scope of its investigation into websites that host fake and misleading reviews. However, Which?’s #JustNotBuyingIt campaign is also demanding that strong new laws are introduced by the government to force tech giants to protect people online.’

When Which? presented our findings to Facebook, a spokesperson told us: ‘We’re investigating the accounts brought to our attention. We have dedicated extensive time and resources to tackling this issue and will continue to do so. Fraudulent and deceptive activity is not allowed on our platforms, including offering or trading fake reviews.’

Fast Face Likes said: ‘Your orders were completed and both are ok. Everyone is free to leave a review on a public Facebook page. Our collaborators around the world are free to do this, [but] obviously Facebook doesn’t don’t like it because they sell their own likes, followers and reviews via Facebook ads.’

Red Social told us it ‘facilitated a customer demand’ that had been created by the inherent issues with Facebook’s review system. ‘Many of our clients had fallen victim to competitors or unreasonable clients flooding their pages with negative reviews, leaving Facebook page owners with no other options but to purchase positive reviews,’ it told Which? ‘We’ve never accepted orders which requested us to deliver negative reviews to a Facebook page. After considering the room for abuse that this service may create, we’ve made the decision to stop offering Facebook recommendations and have removed the service from our site.’ Red Social also refunded what we spent on the review package Which? purchased from them.

Fast Face Likes said that ‘After considering the room for abuse that this service may create, we’ve also made the decision to stop offering Facebook recommendations and have removed the service from our site’. At the time of writing, reviews and recommendations have been removed from its site, but other services like paid page likes and post likes remain.