Our latest investigation into fake and misleading reviews has revealed a web of paid-for ‘reviewers’ manipulating the star ratings of nearly 50 Google business listings – from home improvement companies, to a stock broker and even a dentist surgery.

In January 2021 we went undercover and signed up to firms offering review manipulation services – including the posting of fake five star reviews – to business listings on Google. We found:

While many work hard to provide the level of service that leads to genuine five star reviews, our evidence shows how others can take shortcuts to build a good customer rating.

Read our guide on how to spot a fake review to stay one step ahead.

Find out how fake reviews can impact local businesses on Google.

How important are Google reviews?

Google business reviews appear on search results or within Google Maps, and impact the order in which you’ll see business listings. In June 2020, we surveyed 2,072 UK adults to find out where they look for customer reviews. Of those that had used reviews of local businesses (excluding trades) in the 12 months prior to the survey, 46% had read Google reviews.

According to a BrightLocal report in 2018, Google was the fastest growing platform for local business reviews, and more recently it signed up names such as Anthony Joshua and Sheridan Smith to promote the role of Google reviews in supporting local businesses in the wake of national lockdowns.

But our investigation has revealed concerning gaps in Google’s monitoring of its review platform, potentially leaving people at risk of being misled into using local businesses that aren’t up to scratch, or that they wouldn’t have chosen otherwise. More worryingly, we found evidence of substantial financial risk with one of the businesses we uncovered.

Bad actors may also be jeopardising the fate of other local businesses – paying for fake five star reviews that rocket them up the search rankings. In a 2019 survey by the Federation of Small Businesses (FSB), a fifth of small firms (21%) reported that malicious or fake reviews were the most common challenge they faced when trading over online platforms.

The competition to appear prominently in Google search results is fierce, and this has created a thriving industry offering businesses a shortcut to the top. We searched online for companies that were selling Google reviews in bulk – they were all easily found in Google’s own search results.

We created our own fake Google business listing – ‘Five Star Reviews’ – and bought 20 Google reviews for £108 ($150) from a site called Reviewr. It says ‘buying Google reviews is undoubtedly a smart choice’ as ‘89% of consumers trust online Google reviews as much as personal recommendations’. It claims to offer ‘100% permanent reviews’ for the platform, that won’t be deleted.

We were able to choose the star rating for each review, and decided to request that they were all five star, and that we wanted three to five left each day. We even provided the exact copy for the 20 reviews – praising the unbelievably good service of our fake business and the owner, who we called Catherine. Over the next week they started appearing, left by a variety of Google accounts. 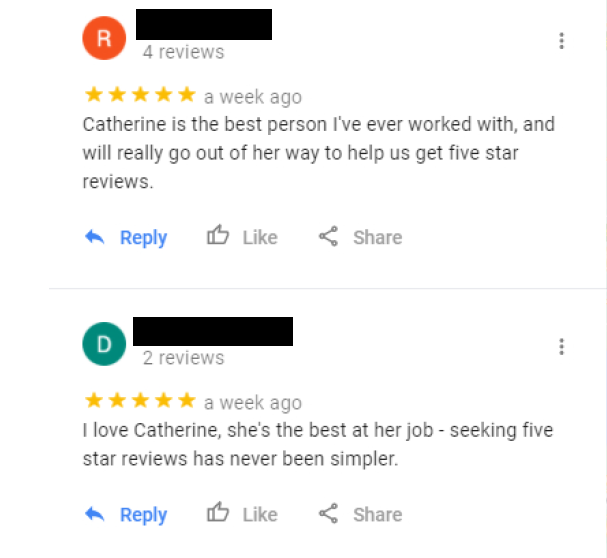 One of the reviews was deleted, so we queried it with our Reviewr account manager and were told that sometimes they see what’s called ‘review filtering’. If this happens, they slow down the rate of posting reviews so that they ‘stick’.

As the number of reviews grew, we started to look at the profiles that had left them, and noticed a pattern emerging.

Google isn’t the only platform targeted by fake review businesses – find out how a thriving review industry is gaming Amazon.

Many of the Google accounts used to plant our fake reviews had reviewed the same selection of businesses, all around the country.

We linked together nearly 50 businesses that had at least three reviewers in common – including a stockbroker in Canary Wharf, a solicitors firm in Liverpool, a dentist in Greater Manchester, a London estate agent and a bakery in Edinburgh – suggesting that each of these businesses paid the same review trading company to post these glowing appraisals.

Several of the profiles had left reviews of at least 15 businesses. Of those, all had rated an SEO advisory business in Edinburgh and a psychic in London as five stars – an unlikely coincidence.

All but one had also reviewed the same dentist in Greater Manchester, a bakery in Edinburgh, a next day catering equipment company in South West Scotland, and a massage therapy shop in Soho.

The map below shows the variety of locations reviewed by just one of the profiles. In addition to the businesses above, they had used a vehicle recovery service in Oxford, a letting agency in London and a driveway construction company in Bournemouth. 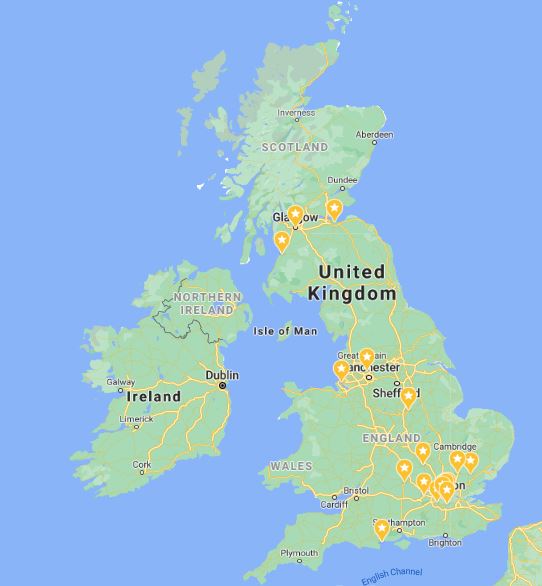 Concerningly, the reviewer had also given five stars to a Liverpool-based solicitor claiming that it had helped them to get back £45,400 from a bank after being scammed.

Another reviewer profile that we believe was employed by Reviewr praised a Surrey-based limo hire company, stating that he had lived in the area for five years and used them for all airport trips. In the same month he used the services of a Glasgow-based electric gate installation firm for his home – locations that are 412 miles apart. Over the next few months, the same profile used a dentist in Greater Manchester, a paving company in Bournemouth, and praised the services of a locksmith in Cambridgeshire for rescuing his two-year old daughter from a locked car outside of her nursery.

The risk of fake reviews

Companies that are taking shortcuts to rise up the ranks dishonestly are in breach of Google’s terms of use, and may well steal business from those operating honestly. Our investigation revealed that, in some cases, they may pose a threat to consumers, too.

One of the other businesses we identified as sharing a large number of reviewers with other, unrelated, business listings was a stockbroker based in Canary Wharf.

For six months in 2020, it had received a lot of negative reviews – many citing ‘shockingly poor customer service’. Concerningly, one reviewer claimed to have lost £27,000 worth of investments because the business acted against his wishes, while another called the company ‘scammers’ and a third said it was the worst broker they’d ever dealt with.

Between two and four months prior to our investigation it seemed to have changed its ways, if the 30 five star reviews left in quick succession were to be believed. We linked many of these reviewers to other businesses we’d identified in our investigation – including one profile that had also reviewed our own fake business.

We believe that each of the businesses we identified paid the same review trading company to post these glowing appraisals.

We shared our findings with Google, and it quickly shut down our fake business.

It said that the issue of paid for fake reviews, as in our investigation, is a complex and persistent threat. It went on to tell us that it uses automated detection systems that scan millions of reviews each day to detect and remove content that violates its policies, and that this is applied to every review before it’s published.

The tech giant admitted, however, that the automated systems aren’t perfect and that inauthentic reviews can slip through from time to time. It deploys teams of trained operators and analysts who audit content both individually and in bulk – yet a Which? researcher was able to identify a web of reviewers across nearly 50 businesses that are unlikely to be linked.

A Google spokesperson said: ‘We invest significantly in building technologies and instituting practices that help people find reliable information on Google. Our policies clearly state reviews must be based on real experiences and information, and we closely monitor 24/7 for fraudulent content, using a combination of people and technology.

When we find scammers trying to mislead people, we take swift action ranging from content removal to account suspension and even litigation.’

When Which? reached out to Reviewr it initially responded but did not provide a comment.

More must be done to help fight fake reviews

The Competition and Markets Authority (CMA) is currently investigating the problem of fake reviews. To protect consumers from being misled, the consumer champion is calling on the regulator to take strong action against sites that host reviews if it finds that they are failing to prevent fake reviews flooding their platforms. It must also take swift and effective action that puts a stop to sites that are trading, or facilitating the trading, of fake reviews, a practice which is likely to be in breach of consumer law.

Natalie Hitchins, Head of Home Products and Services at Which?, said:

‘Businesses exploiting flaws in Google’s review system to rise up the ranks are putting other honest businesses on the back foot and leaving consumers at risk of being misled.

‘The regulator must stamp out this harmful behaviour and hold sites to account if they fail to protect their users, otherwise the government must urgently increase websites’ legal responsibilities for misleading content on their platforms.

‘Google, and other sites, must clamp down on and prevent these manipulative practices to ensure that consumers can trust the reviews that they see.’

If you or someone you know has been affected by fake reviews, report it to Which? at fakereviews@which.co.uk.