How to buy the best freestanding cooker

Searching for a new gas or electric cooker? We reveal what you should look for and how much to spend to get the best freestanding cooker.

Freestanding cookers that slot into a space in your kitchen can be a cost-effective cooking solution, as they wrap up an oven, grill and hob in one product.

A good one will have plenty of space, cook quickly and evenly, and be easy to use and clean. Pick a dud and you could be left with badly cooked food and a hob that takes ages to heat up.

Head to our best freestanding cookers to find out which model you should buy.

Video: how to buy the best freestanding cooker

Watch our video to get the lowdown on how to choose a new cooker that's right for you.

Buying the best cooker for you

Our interactive tool will walk you through the features you need to consider when buying a freestanding cooker – to help you decide which ones are essential and which you can live without.

Unless you have a strong preference for gas or electric, it makes sense to stick with the fuel type you already have. Gas is cheaper to cook with, but cooking costs have a relatively small impact on most people's household energy bills.

There are a couple of different combinations of fuel type and technology. You can have all-gas, all-electric or a dual-fuel cooker that has an electric oven and gas hob. With electric models your main choice is what kind of hob you get.

These have an electric oven and hob. Most have fan or fan-assisted ovens, which should help to spread heat more evenly around the oven cavity.

There are occasions when conventional heat - top and bottom heat without a fan - is an advantage, and if you get a cooker with a double oven, you'll usually get one conventional oven and one with a fan.

These have an electric oven and electric induction hob. Induction hobs heat quickly and efficiently, and the hob zones themselves don’t get hot during cooking, which can be handy. But you’ll need iron-based pans, such as stainless steel, which can be an extra expense.

If a fridge magnet sticks to a pan, then it will work on an induction hob.

All-gas cookers are the cheapest to cook with, and the gas hobs are usually easier to control than standard electric hobs. However, the oven cooking results can be a bit less uniform than in an electric model.

Gas and dual-fuel cookers will need to be installed by a Gas Safe-registered engineer.

Find out more about the differences with our guide to gas cookers vs electric cookers if you aren't yet sure what you want.

How much do I need to pay for a freestanding cooker?

All-gas cookers are typically the cheapest and most basic option (provided you already have access to gas), and the average price is around £350. Electric cookers with a ceramic hob and dual-fuel cookers will cost a little more.

Our cheapest Best Buy cooker is an all-gas model

If you're keen to have an induction hob on your freestanding cooker, you should expect to pay between £400 and £600. Some can cost up to £1,000, although this is still likely to be cheaper than buying a double oven and induction hob separately.

The cheapest cookers usually have just one oven, plus a storage drawer. But if you're willing to pay a little more you will get more features and more stylish designs.

However, paying more doesn't necessarily mean you'll get a decent cooker. We've found pricey models that fail to impress as well as some cheap-and-cheerful options.

Check our cooker reviews before buying to see if you can find a bargain.

Is a gas cooker or electric cooker cheaper to run?

Gas cookers are the cheapest to run as well as to buy, and can cost as little as £14 a year to run.

Electric cookers have higher running costs – we came across one recently that ate up the fuel and would work out at just under £90 a year - but generally you'd expect to pay around half this for standard family use.

The average annual running cost across all of the gas and electric ovens we've tested is £33.

Find a good cooker that is also cost-effective to run by using our cooker reviews to compare models.

What is the standard size of a freestanding cooker?

Most freestanding cookers are 60cm wide, but if you're squeezed for space, you can also find 50cm and 55cm-wide models.

All are roughly the same height (80cm) and depth (60-65cm) to fit a standard kitchen and line up with your worktops.

How is the oven capacity measured?

Manufacturers state capacity in litres, but this includes space you can't actually use for cooking, such as the area under the lowest shelf.

We only measure the space you can actually use to cook with. You'll find the figure for each cooker we've tested in the specifications tab on our cooker reviews.

Our tests show that the average usable oven capacity of a cooker's main oven is 43 litres, but there is quite a large range in volumes: the smallest main oven we've tested has a volume of just 38 litres, while the largest is a roomy 58 litres, giving you nearly a third more space to cook with.

It's worth checking inside the oven to see how many oven racks are supplied, and how many shelf positions you have to play with – as this affects how much you can fit in, too.

How much does it cost to install a cooker?

If you opt for the same fuel then prices start from around £65.

If you'd prefer to give your business to a local trader endorsed by us, then go to Which? Trusted Traders to find companies who may be able to offer you a cheaper deal.

The Zanussi ZCI69060XE is a freestanding cooker that's packed with features including the option for a 'PlusSteam' cooking function in the main oven, which according to the manufacturer ensures food is golden and crispy. It comes in black and stainless steel.

Did it fare well in our lab tests? Read the full Zanussi ZCI69060XE Black review to find out.

The Smeg TR62BL is a super-stylish freestanding cooker with an electric oven, grill and gas hob. You get two griddle pans and a wok ring included, but at £1,249 it’s one of the priciest models we’ve tested.

Is it worth it? Read the full Smeg TR62BL review to find out.

The AEG CCB6761ACB is absolutely packed with features, including the option for a 'steam bake' cooking program, catalytic linings in the main oven and a sensor stick to monitor the core temperature of your joint of beef. But does it do its main job properly?

Read the full AEG CCB6761ACB review to find out how well it cooks food.

The Belling FSG608DC freestanding cooker has two conventional ovens, an electric or gas grill and comes equipped with self-cleaning catalytic liners and a full-width griddle pan. It’s not the cheapest gas cooker we’ve tested, but is it one of the best?

Read the full Belling FSG608DC review to find out. 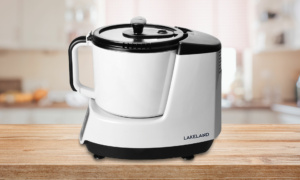 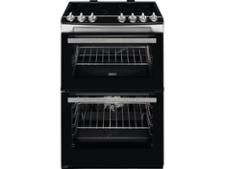 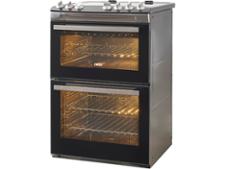 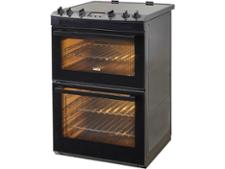