It may sound too good to be true, but there really are free smartphone apps that will pay you to use them.

We tested eight of these apps over a four-week period, using each of them equally, so it's easy to spot which of them require the biggest time investment in order to make serious money.

Some of these apps can be used whenever you have a few minutes spare, regardless of where you are. For these, we dedicated the equivalent of 10 minutes per working day for 20 days (or every working day for four weeks) to testing these apps.

Other apps can only be taken advantage of in certain circumstances as you go about your everyday life. Our tester kept these apps installed for four weeks and used them whenever the opportunity arose.

In this time, we managed to earn £56.25 worth of rewards. This came from just four of the eight apps we tested - we didn't earn enough points to cash out on the other four.

See our reviews below to get an idea of how much you can expect to make if you download these apps yourself.

Job Spotter pays users to take photos of job adverts in windows and submit them to the app's creators, indeed.com. Jobseekers can then view these adverts online.

Snappers are rewarded between five and 150 points per advert, depending on its originality. This is calculated by a bespoke algorithm within the app - essentially a computer programme that decides how 'valuable' the advert is.

A unique advert for a small business is worth more points than a generic opportunity for a large company across multiple locations. 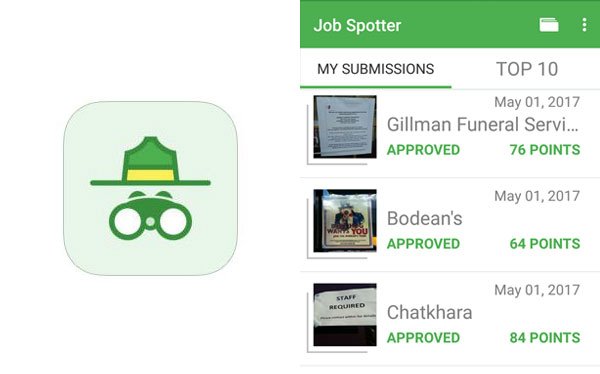 With Job Spotter, you'll earn points for each job advert you snap on the high street.

Job Spotter is simple to use. Simply open the app, press a button to load the camera, snap the advert and the store's name, then submit. You should be done within seconds.

You might be surprised how many job adverts you come across when you're actively looking for them.

Each point earned is worth one US cent. In the four weeks of having Job Spotter installed, we snapped 53 adverts, racking up 3,742 points, which we exchanged for an Amazon voucher worth £37.75.

After our research, we kept Job Spotter installed for a second four-week period, earning an extra £12.52, bringing our total to £50.27. 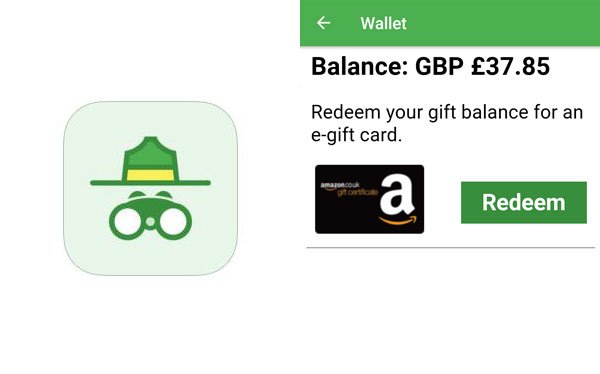 Of the eight apps we tested, Job Spotter was the highest-paying by some distance.

Roamler pays you for performing small mystery shopping tasks around the city. These tasks usually involve taking photos of stock in shops or supermarkets, and answering questions about product availability.

Typically, each task takes no longer than a few minutes. The more complicated missions tend to offer better rewards.

Roamler is an invitation-only app, so you'll need to track down an invite code from an existing user. We managed to secure a code by asking for one on the Roamler UK Facebook page.

New users have to complete a series of unpaid tasks before getting any opportunities to earn cash. This helps ensure that only committed users are offered paid tasks.

It also helps equip users with the necessary knowledge to complete tasks correctly. Even after completing this training, we still failed some tasks, so there's a learning curve involved.

With each task completed, you'll earn experience points which eventually allow you to 'level up'. Higher-level users are offered more paid tasks.

We reached Level 2 within a few days. At this point, new paid tasks typically popped up every couple of days.

In London, some tasks could be completed across 50 or more locations, but you have to be pretty quick to accept them or another Roamler user will beat you to it.

We didn't travel too far out of our way to perform tasks, only accepting those within a short distance.

In the four weeks we had the app installed, we earned £12.50. We accepted another £14 worth of paid tasks, but didn't follow the instructions properly and therefore failed to cash in.

Level 2 users can accept a maximum of five tasks a day, so committed users could earn far more over four weeks than we did. It all depends on how much effort you're willing to put in.

After our research, we kept Roamler installed for a second four-week period, earning an extra £52, bringing our total to £64.50.

Our gallery below shows how you could earn £25 in a day by completing a mystery shop at five of the listed bars.

Toluna is primarily an app which pays you for taking surveys. You can earn 2,000+ points for taking major surveys, which typically take 15-20 minutes to complete, or 15 points by completing minor one-question surveys.

It's simple to create your own short surveys, or gather opinions on a topic you're interested in. This creates a unique sense of community among Toluna users.

There is an impressive range of gift cards, rewards or sweepstake entries for you to spend your points on.

Of all the survey apps we tested, Toluna was the easiest and the most rewarding to use, although it did crash twice just as we were completing a major survey.

We were rejected from completing a lot of surveys after filling out our demographic information, but were able to complete a far greater proportion of them compared to the other apps we tested.

We completed 11 major surveys and dozens of minor surveys during our 20-day testing period, earning a total of 27,045 points.

Fronto places adverts on your phone's lock screen and pays points for unlocking your phone.

These points can be exchanged for gift vouchers at Amazon, Debenhams or Marks & Spencer, or for Paypal payments.

If you click through to the websites advertised, you can earn more points. Fronto has minimal impact on your smartphone usage unless you're easily distracted by viral articles.

Our tester kept Fronto installed on his phone for four weeks and racked up 6,910 points. A £1 Amazon gift voucher costs 5,070 points, so to make a significant amount of money with the app, you'll need to keep Fronto's adverts in place for at least a year.

These coins can be exchanged for vouchers at Amazon or Google Play, as well as PayPal payments.

Taking surveys appeared to be the most time-effective method of earning coins.

However, you can expect to waste a lot of time filling out demographic information, only to then be told you're not suitable to take part. Many times, this occurred straight after we noted that we worked in journalism/media/magazines etc. Those with careers outside these fields may have better luck.

Trying to earn coins by downloading apps proved similarly time-consuming. With some, you only need to install and open the app to earn coins, but other downloads only pay out if you get through to a certain point (a specific level of a game for example). Many of the download links were interrupted by pop-up adverts.

You'll earn one coin for watching a 1-2 minute advert, and this typically triggered the appearance of another ad you have to watch for free. This is definitely the least time-effective method of earning coins.

The competitions are typically littered with dozens of tick boxes asking if you'd like to be contacted by advertisers, so be vigilant when scrolling through these.

Receipt Hog pays you to take photos of your receipts, and those collected by others in your household.

Each receipt from grocery or health & beauty stores earns you between five and 20 coins depending on the size of the purchase.  The maximum amount of coins you can earn from submitting receipts is capped at 100 per week.

Receipts from other types of retailers, including clothes, electronics and home improvement stores, earn you one spin on the 'Hog Slots'. This slot machine game pays out between 0 and 2,000 coins per spin.

Each receipt submitted earns you one entry to the monthly sweepstakes, where huge coin bonuses are handed out.

But it will take a minimum of 10 weeks to earn this just from scanning receipts, although big wins on the Hog Slots can speed up your earning potential. After four weeks of snapping receipts, we earned just 219 coins.

You can earn points (or Swagbucks as they are called) by making web searches, watching videos or completing surveys. There is also has an associated cashback site which rewards you in Swagbucks rather than cash.

It quickly became apparent that watching videos and making web searches would not the most time-efficient method of earning Swagbucks. The sporadic rewards offered while using the search engine weren't worth the extra effort of navigating to it in the app, while watching videos only paid a pittance.

The quickest way to earn Swagbucks for free appeared to be filling out surveys. However, as with all of the survey apps we tested, we were often rejected from taking part after filling out our demographic information.

This often occurred immediately after noting our choice of career (media/journalism/magazines etc).

The Swagbucks cashback site had plenty of available deals, although not compared to the likes of Quidco and TopCashback.

There are plug-ins available that make it almost effortless to earn Swagbucks from your desktop computer. For example, you can make the Swagbucks search engine your default option - or run Swagbucks video ads in the background while you're working.

Making serious money from the smartphone app appears to be a real slog though. We spent ten minutes a day attempting to fill out surveys for 20 days, and earned 232 Swagbucks. A £5 Amazon voucher, however, costs 600, so we weren't actually able to earn any money.

Voxpopme pays you for offering your opinion on a range of subjects. Simply upload a one-minute video of you talking about the subjects offered to you. You'll earn 25p for each video.

We answered every question offered to us in the four weeks we had the app installed, but still only earned £2.25. The app offers Paypal payments, but you have to earn a minimum of £10 before you can cash out.

Compare Savings Accounts
Which? Money Compare's savings comparison tables help you find the best savings account and show the best savings rates, based on both price and the quality of customer service you can expect.
In Compare Credit Cards

Compare Credit Cards
With Which? Money Compare you can compare credit cards, based on both price and customer service. So whether it’s 0% balance transfers, credit cards for bad credit or interest-free spending, you can be sure you’re getting the best deal for you.
In Banking