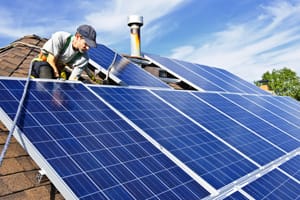 Solar panels being installed on a roof

Three quarters of companies investigated overestimated how much energy the solar PV panels would produce and most of them underestimated how long it would take for the system to pay for itself.

We investigated the selling tactics and advice given by 12 solar PV panel companies for the installation of solar panels on the roof of a house in southern England. We found:

You can watch secret camera footage of solar salesmen in action from the investigation online.

Which? executive director Richard Lloyd says: ‘It seems incredible that the government’s method requires companies to ignore whether you live in Cornwall or Scotland when working out how long it’ll take to pay for the solar panels. It’s obvious that the more sun you get, the faster the payback. The government has to put this right.

‘It really isn’t difficult – companies just need to make sure they send people who are qualified to ask the right questions, do the right checks and give customers better advice.’

If you’re considering buying solar PV panels, check out our comprehensive online guide on how to buy solar panels, which includes information on solar PV costs and payback times.

£28,000How much profit you could make in 25 years through FIT with a 4kWp solar PV system.

The government’s Clean Energy Cashback scheme, also known as the feed-in tariff (FIT) pays homeowners for generating electricity from solar PV panels a tax-free guaranteed and index-linked tariff for 25 years. With a 4kWp system, you could make up to £28,000 profits over 25 years.

So, not surprisingly, solar PV has attracted a lot of interest from homeowners and to protect consumers, to qualify for the FIT you must use products and installers registered under the Microgeneration Certification Scheme (MCS). There are now over 3,000 solar PV installers on the MCS register.

But despite MCS, our investigation found that out of the 12 companies, two were clearly in breach of the industry consumer code they signed up to. One firm, Skyline, offered a ‘first come, first served’ discount if the customer was prepared to give it regular meter readings and another, Green Sun, gave 24 hours to make a decision.

Which? is calling for strengthening and better enforcement of the MCS rules and changes to the way profits and payback time are calculated. Which? is concerned that companies have to use the government’s methodology to work out energy output, however, this doesn’t take into account key factors like where people live.

We’re talking to Government, the MCS and the industry’s trade bodies to improve the service consumers get from solar companies.