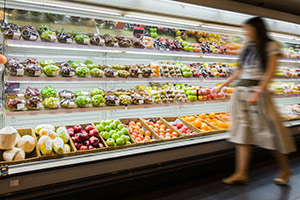 Asda was cheapest for our comparison basket in April 2015

We’ve added up the price of a basket of branded groceries and found Asda was the cheapest supermarket for April 2015. But who was the most expensive?

Each month, we compare the prices of a selection of everyday groceries from the main online supermarkets. For April, we found Asda was £13.95 cheaper than the most expensive supermarket, charging £131.52 for the 76 products.

To find out the full results, go to supermarket prices compared.

Tesco revealed losses of of £6.4 billion, which is one of the biggest in UK corporate history. This follows a difficult year for the UK’s biggest supermarket, which included an accounting scandal.

Across supermarkets food sales grew 0.4% over the three months to April (compared with the same time the previous year), according to the British Retail Consortium.

Are Tesco’s financial woes reflected in how its shoppers feel about it? You can find out what Tesco’s customers, and customers of all the other supermarkets, revealed in our supermarket survey. Go to the best and worst supermarkets.

Many supermarkets have a price matching scheme. However, these schemes do vary, so to help you out we’ve put what the major ones are below:

Every month we compare the price of between 75 and 100 grocery items at the main online supermarkets Asda, Morrisons, Ocado, Sainsbury’s, Tesco and Waitrose.

The products are all branded items and include a wide range of groceries – from coffee to cat food, and from beans to bread.