The summer is slightly odd time in the world of tablets. While much of the technology press holds its breath for a glimpse of the latest Apple iPad, other brands continue to release new models – and some are well worth considering.

From the tablets that have run the gauntlet of the Which? Test Lab this summer, we’ve uncovered a Best Buy that you can purchase for less than £300, as well as two other impressive devices that only just miss out on Best Buy status. 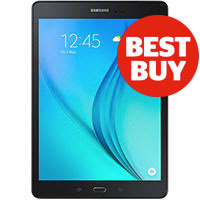 Samsung’s new Tab S2 may have just been announced, but its Tab A model has almost all the hallmarks you’d expect of a range-topping tablet. The 1.2GHz quad core processor is speedy, the Android Lollipop 5.0.2 operating system runs like a dream and its battery just keeps going and going. Whether you’re surfing the web or watching videos, our tests found you’ll get more than 13 hours of continuous use.

The only criticism we really have of this Best Buy is with the screen: the colours are a little on the dull side, and the 4:3 ratio 9.7-inch display (the same ratio as an iPad, rather than the popular 16:9 widescreen format) leaves the tablet’s text pixelated – slightly undermining its maker’s claims that it’s a bookworm’s best friend.

At around £270, the Tab A is one of the cheapest tablets available with built-in 4G connectivity, but if going online while you’re out and about has little appeal, the wi-fi only version also scores well and is around £40 cheaper. 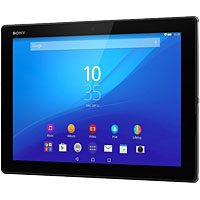 When we got our hands on the Xperia Z4, we could barely believe how light Sony has managed to make this 10.1-inch tablet – it’s a featherweight 384g, which is 56g lighter than the Apple iPad Air 2. The 2,560 x 1,600 resolution screen dazzles too – it also squeezes in more pixels per inch than the Air 2, manifesting in a display that can be viewed clearly even from acute angles.

Sony’s claim of up to 17 hours of battery life also caught our attention, but our in-depth testing soon revealed a different story: we got less than eight hours of video playback, and 11 hours of web browsing. Not bad, but not as good as many of our Best Buys.

Unusually, a keyboard is supplied as standard, which may help explain the high £570 price tag. So if you do a lot of typing on your tablet, this may be one to consider. As with the Samsung above, go for the wi-fi only version and you’ll make a saving, in this case £70. 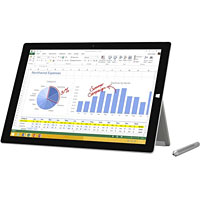 We had high hopes for the machine that Microsoft says gives the best of a tablet while working like a laptop, and in some respects the Surface 3 lives up to its billing. The Quad Core Intel Atom x7 processor is certainly pacey (although can’t quite beat the iPad Air 2 or Google Nexus 9 – both Best Buys – in pure speed), the metallic casing gives it a premium feel and the 10.8-inch HD display is striking in its clarity.

The Surface 3 has a full-sized USB port and micro-SD card reader, which could come in handy. But it pays for this extra connectivity in its bulk – at a weighty 622g it’s nearly 50% heavier than the Air 2 and Samsung Galaxy Tab S 10.5.

This 128GB version of Microsoft’s latest offering will cost you £500, although you’ll pay extra to add Microsoft’s bespoke Type Cover keyboard or Surface Pen stylus. Alternatively, the 64GB version is £80 cheaper and scores almost as well in our tests.