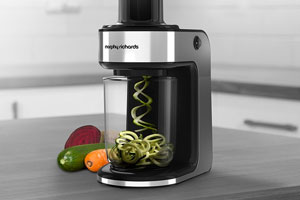 If you’re keen on courgetti, but sick of the manpower involved in transforming your vegetables into noodle-like strands, the new Morphy Richards Spiralizer Express might be just the ticket.

The first of a wave of new electric spiralizers launching in summer 2016, it promises to speedily transform veg into noodles for a low-carb pasta alternative.

It has two interchangeable blades, for thick or thin noodles. At £50 it’s more expensive than most manual vegetable spiralizers, which usually cost between £15 and £30. So is it worth splashing out?

Get our verdict on the Morphy Richards Spiralizer Express and see how we thought it did along with ten popular manual spiralizers in our spiralizer reviews.

What is spiralizing and why is it so popular?

Spiralizers transform everyday vegetables into long spaghetti-like spirals – handy if you’re looking to cut down on carbs, introduce more variety into your diet, or persuade the kids to eat more veg.

They have become increasingly popular after being endorsed by celebrity food bloggers like the Hemsley sisters. There are now lots of different spiralizers available, and you can even buy pre-spiralized vegetables in supermarkets – albeit at a heavy price.

We tried out ten popular vegetable spiralizers to see which were the best for making hassle-free veggie noodles. There are several different types available:

You can find out more about the different types of spiralizer, how much they cost, and which might suit you best by heading to our guide on buying the best spiralizer. 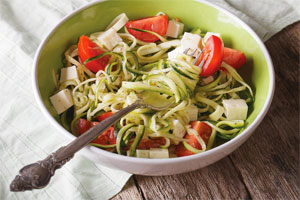 The new £50 electric spiralizers from Kenwood and Morphy Richards are quite a jump in investment if you’re in the market for a spiralizer. You could pick up a food processor for less than that, but if you’re a keen courgetti fan, trading up to a powered version might be worth it.

We found using manual spiralizers could be quite hard on the arms, particularly if you need enough courgetti to feed a crowd. It can take a bit of practice to get the consistent pressure needed to create decent spirals rather than scrappy bits – particularly if you’re spiralizing harder vegetables like sweet potatoes or butternut squash.

With an electric spiralizer, you just gently push the vegetable down onto the rotating blade, which means less manpower is involved. But can an electric version turn out perfect courgetti noodles with minimum fuss or will it end up gathering dust in a cupboard when you tire of the faff involved? Read our Morphy Richards Spiralizer Express first look review to see what we thought.

We look at how easy they are to set up and use, how consistent the noodles produced are, and whether it’s easy to safely change the blades – and wash up afterwards.

We’ve tried spiralizers for all budgets, including models that cost less than £10. To find the best option for you, head to our round-up of spiralizer reviews.