The Amazfit Bip is the first smartwatch available in the UK from Chinese manufacturer Huami, which also makes Xiaomi devices. It costs just £70, but how smart is it really, and can it compete with the latest smartwatches and fitness watches from market-leaders Fitbit and Garmin?

All three of these devices have your back if you want to track everyday activity, but do any go beyond that? And what smart features do they all have? We’ve taken a look at the technical specifications for each, and reveal our initial impressions of the Amazfit Bip, Fitbit Versa and Garmin 645 Music below.

Best Buy smartwatches – find out which models aced our tests 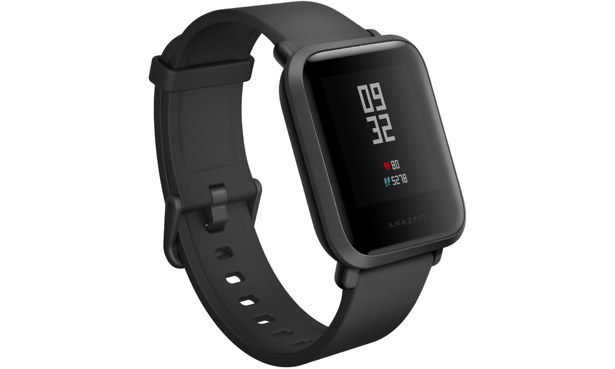 This is the first smartwatch available in the UK from Chinese manufacturer Huami, which also makes Xiaomi devices, and you can buy it for £70 (the same as the Garmin Vivofit 4). It’s got a rectangular bezel, an always-on colour 1.28-inch touch display and a flexible silicone strap, and it weighs 31 grams. Design-wise, the Bip is pretty similar to the Fitbit Versa, and bears a striking resemblance to the Apple Watch.

It has plenty of sensors for keeping track of fitness and activity, including built-in GPS for tracking distance without your smartphone, a heart-rate monitor, a three-axis accelerometer, and a barometer for measuring altitude. It will even estimate your oxygen intake (VO2 max), like the Garmin 645 Music running watch. We took a look at the companion app, too, but you’ll need to read the full first look review to find out what we thought of it.

When it comes to smart functionality, you will receive text messages, calls, emails and social-media notifications from your smartphone, but there’s no way to respond. You can’t add apps to the watch, as you can with some smartwatches (although this isn’t possible with the Fitbit Versa, either). There’s no built-in storage for music as there is with the Versa and 645 Music.

One of the most impressive features on this bargain smartwatch is the battery-life claim – a whopping 45 days. This is longer than most smartwatches, and around 11 times as long as the Versa.

We took this bargain smartwatch for a spin, so is it truly smart and would it suit keen runners? Find out in our Amazfit Bip first look review. 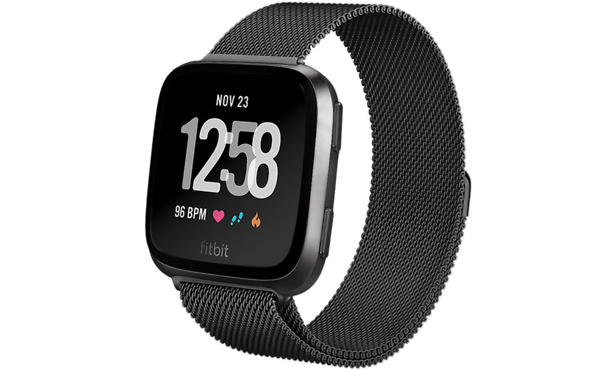 The Versa is the second smartwatch from Fitbit, following on from the Ionic, which launched in 2017. It costs £200 and is available with a silver, black or rose-gold bezel and strap. As we’d expect from Fitbit, the Versa has plenty of fitness and health-tracking features thanks to built-in sensors. It tracks steps and gives reminders to move. There’s a heart-rate monitor, an SpO2 sensor (a measure of blood oxygen saturation levels) designed to track and monitor sleep apnoea, and it’s water resistant to 50 metres.

As with the Amazfit Bip, those looking for smart sensors may find this device a little lacking. You will be able to receive texts and calls, as well as calendar and social-media notifications, but you can’t reply to them. Customers of Danske Bank or Starling Bank will be able to use NFC for contactless payments, but only on the special editions of the Versa.

The Versa really can’t compete with the Bip when it comes to battery life – Fitbit claims you’ll get four days per charge. We’ll put this to the test in our lab.

So does the Versa have enough features to make it worth spending an extra £130? We reveal all in our full Fitbit Versa first look review. 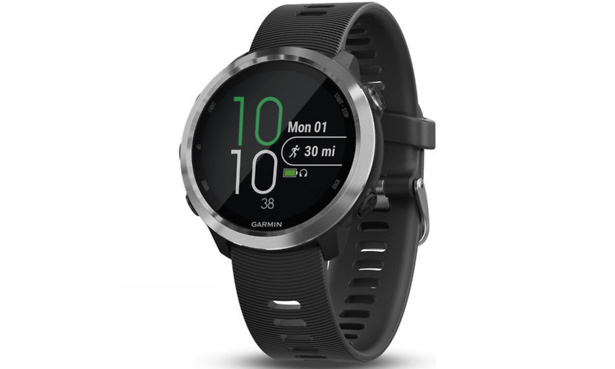 If it’s fitness sensors you’re looking for, the Garmin 645 Music is packed with them. It’s got built-in GPS plus GLONASS for extra location coverage, meaning it can track your route without needing your smartphone nearby. There’s also an altimeter, a compass and a heart-rate monitor. You can get an estimate of your oxygen consumption (VO2 Max), and there are preloaded activities for tracking exercise in the gym and outside.

You can store up to 500 songs on the watch, meaning you don’t need to take your phone if you want to listen to music while running (unlike with the Bip). For those looking for detailed exercise and fitness metrics, the Garmin app is one of the best around.

As with the Versa, this fitness watch can’t match up to the claimed battery life of the Amazfit Bip. Garmin claims you’ll get seven days in smartwatch mode, which is a little short but fairly average. This drops down to 14 hours when using GPS, and a measly five hours when using GPS mode plus music.

So is it worth paying out for this £400 fitness watch? Find out by reading our Garmin 645 Music first look review.

Should you buy a fitness watch or a smartwatch?

This decision largely comes down to the features you’re looking for, whether you want a device that will help you to stay connected or to keep track of your exercise and activity, and how much you want to spend. So which is the perfect device for you?

You can find out more in our guide: Should I buy a fitness tracker or smartwatch?