Many UK roads have width restrictions to prevent large vans and commercial vehicles from using them. But as cars are getting larger, we’ve discovered which models will struggle to navigate any of these roads.

If you’d like to take a shortcut on your commute, or drive down that historic narrow road on holiday, you’ll need to make sure you have a car that’s not too wide for the road.

We’ve all experienced the width-restricting bollards that appear on certain roads – these are accompanied by a width-restriction sign aimed at preventing too-wide vehicles driving down roads that aren’t suitable for their use.

With the increasing popularity of SUVs and crossovers, many cars are getting larger. It’s no longer just round-hugging performance cars and large van-like MPVs that are too wide for many width restrictions – some family SUVs are now too large, as well as luxury cars.

We’ve rounded up the cars that are simply too wide to navigate roads with 6’6” width restrictions, plus those that we wouldn’t recommend attempting – with less than one inch clearance either side. A surprising number of cars make the list.

Want to know which cars we recommend? See our top cars for 2018. 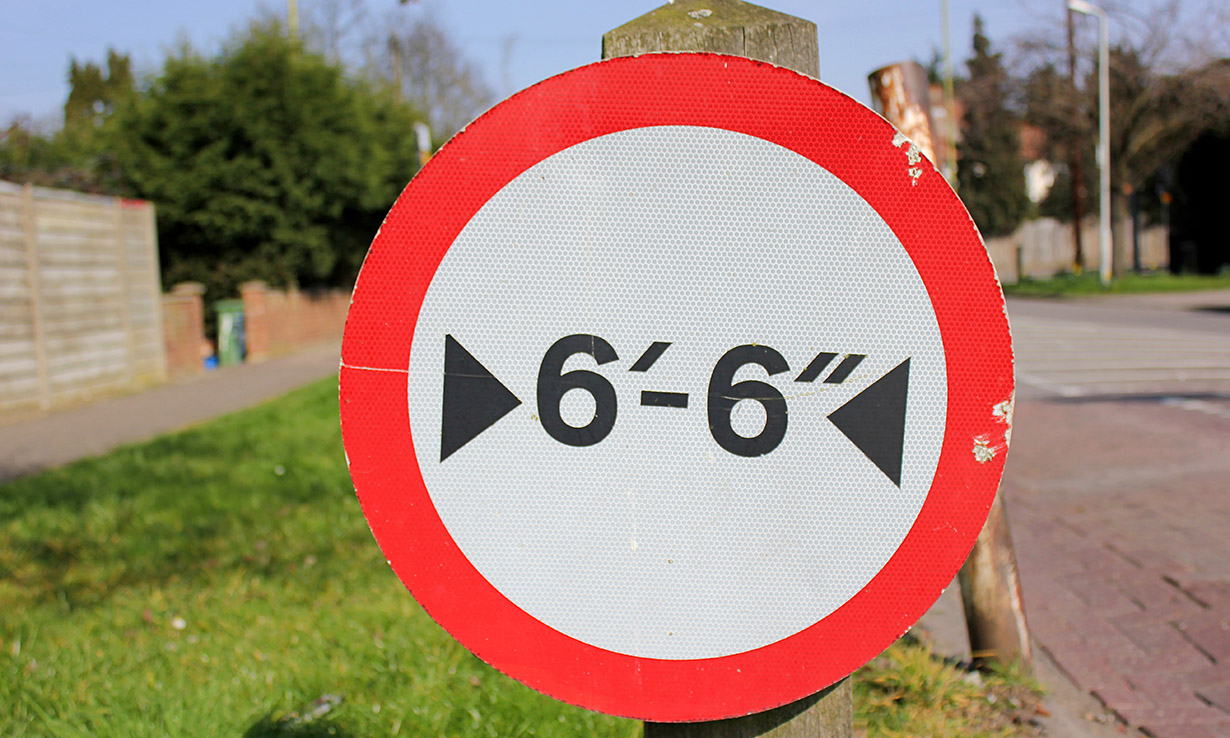 Width restrictions on roads are denoted by a warning sign, with the displayed width typically 6’6” or 7’0”.

If you’d like to avoid restrictions on the roads you use or not worry about risking scratches or dents, check out our full list of wide cars below.

Our measurements are for the body width of the car, not including the wing mirrors. 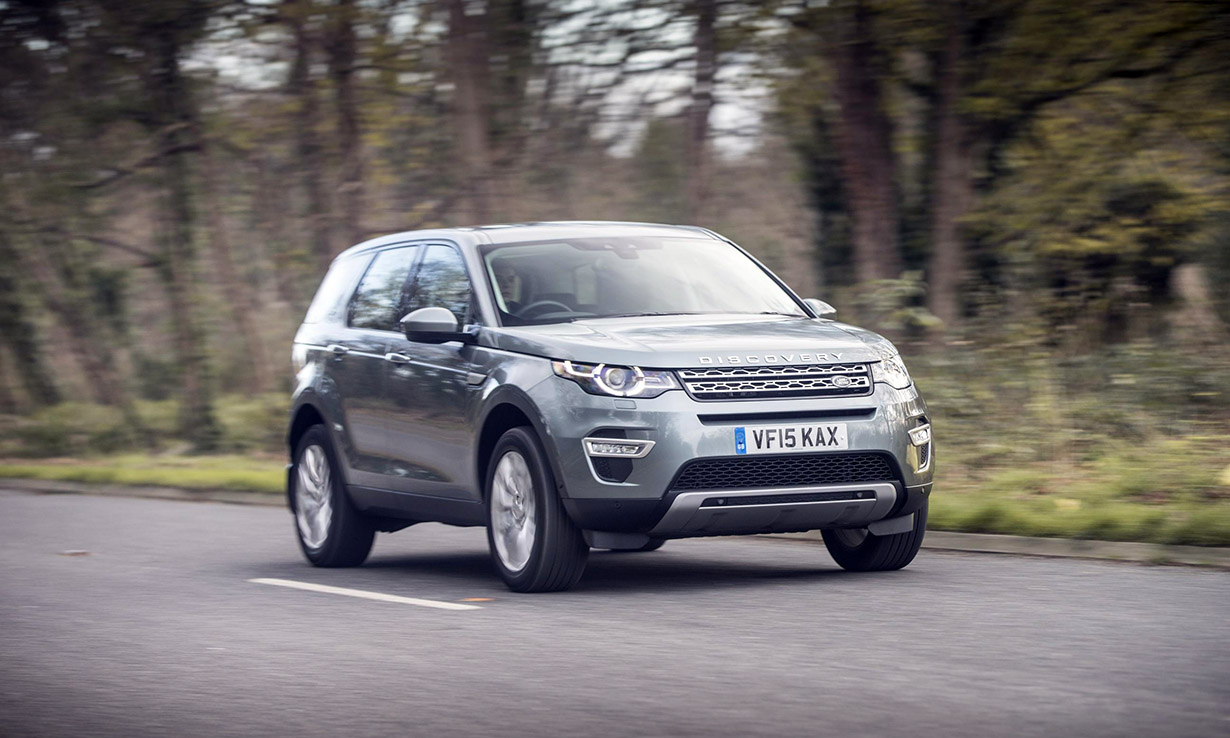 At 6’9″, the Land Rover Discovery Sport is one of the widest cars you’ll see on UK roads. It’s easily too wide to pass down roads with the usual 6’6” width restrictions.

The Discovery Sport is Land Rover’s cheapest model, starting at £28,995, and is an SUV that has loads of space for passengers and luggage. It’s a genuine off-roader with an upmarket design and premium cabin.

The Land Rover Discovery Sport is available in the UK with only one engine – a 2.0-litre turbocharged diesel, with a choice of a power output of 150hp or 180hp. Four-wheel drive is standard, and there are six different levels of trim to choose from.

If you don’t mind avoiding narrow roads, is it a car you should consider?

See what our tests uncovered in our expert Land Rover Discover Sport review. 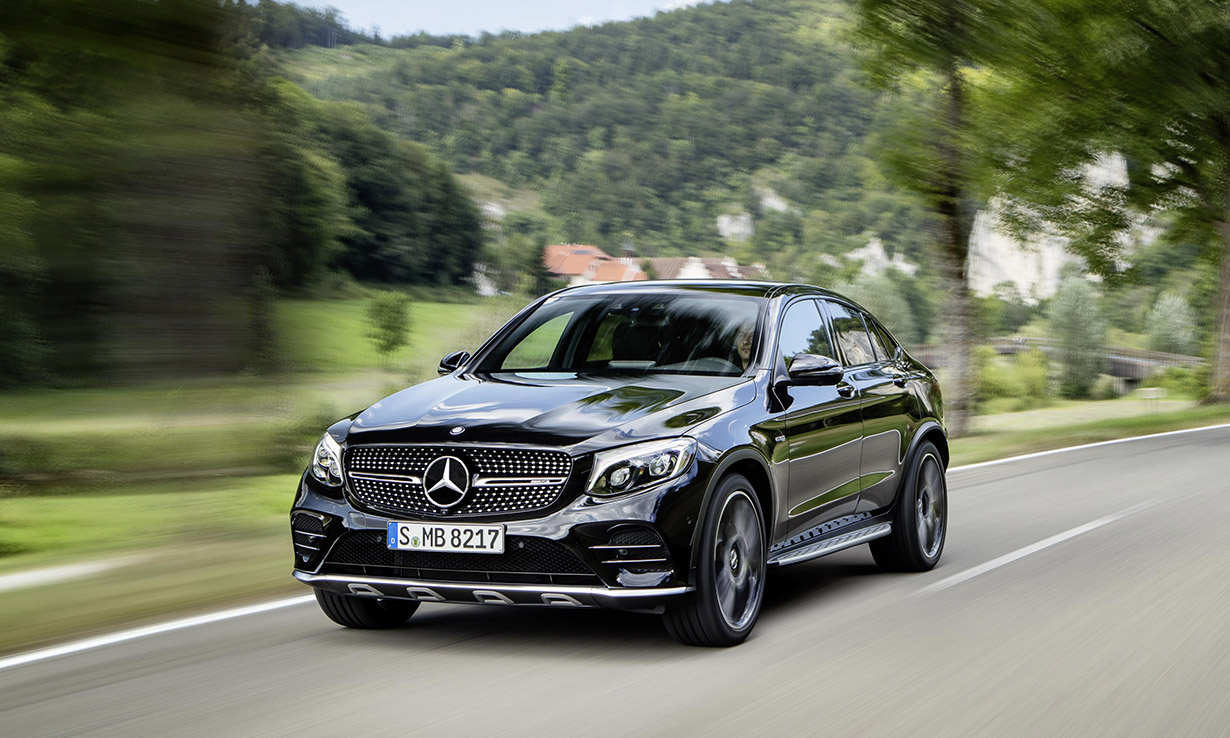 The Mercedes-Benz GLE Coupé is 6’7″ wide, so even precision driving won’t get you through a 6’6” width restriction.

It’s the sports version of the GLE SUV. While maintaining the mechanics of the standard GLE, the GLE Coupé comes with more standout styling and a sportier driving experience.

However, it focuses on practicality, too. It has five doors plus Mercedes-Benz gives you a choice of many diesel and petrol engines to choose from, up to the seriously powerful 577bhp of the AMG version. But, even the entry-level diesel comes with plenty of power.

But being such a heavy car, can it really have a sporty feel and is it worth the hefty £60,000+ price?

Find out in our definitive Mercedes-Benz GLE Coupe review. 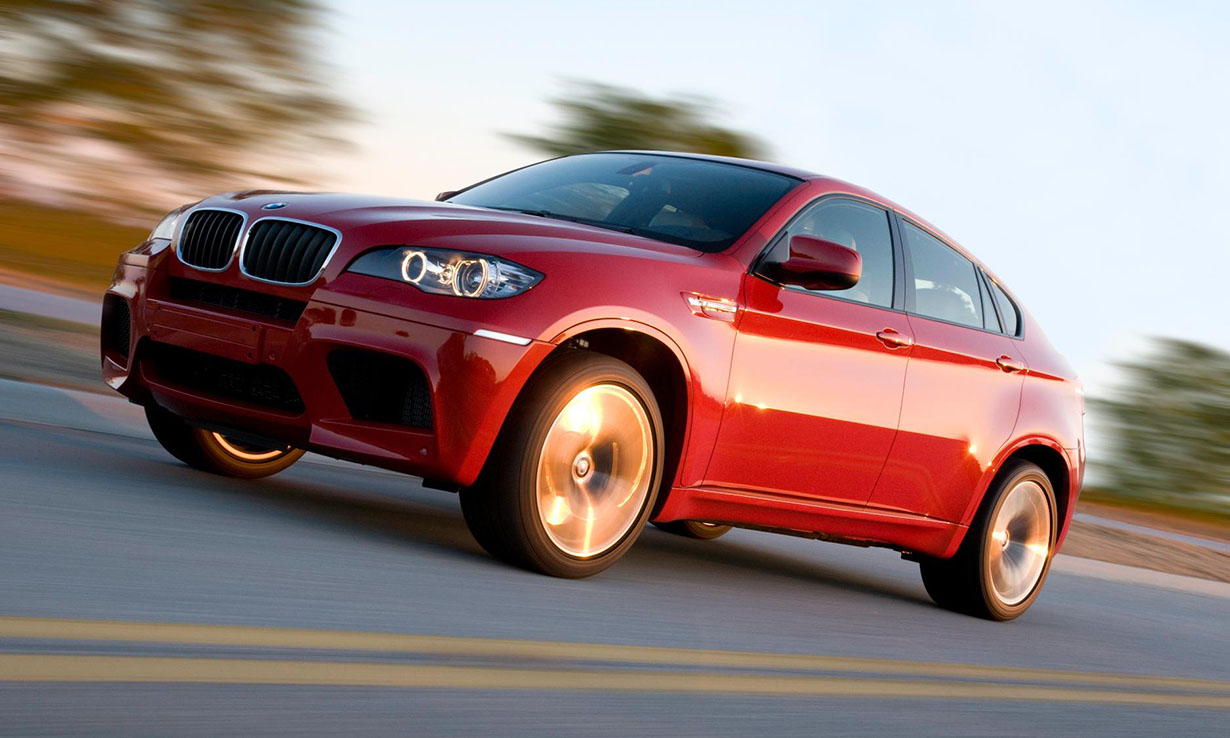 With a width of 6’6″ – identical to the typical UK width restriction – you’ll be out of luck if you’re tempted to try a BMW X6 out on one of these roads.

BMW pioneered the mix of a full-size SUV paired with a coupé roof and sportiness, which was then copied by rivals such as the Mercedes-Benz GLE Coupé. It’s also a combination that seems to have led to very wide cars.

The X6 combines the off-road capability and practicality of a full-size SUV with a performance dynamic chassis and a sweeping roofline. It will set you back upwards of £58,000.

Petrol and diesel engine choices are available, but there’s no hybrid or front-wheel drive versions. Your only transmission option is BMW’s eight-speed automatic.

See whether this is the car of your dreams in our thorough BMW X6 review. 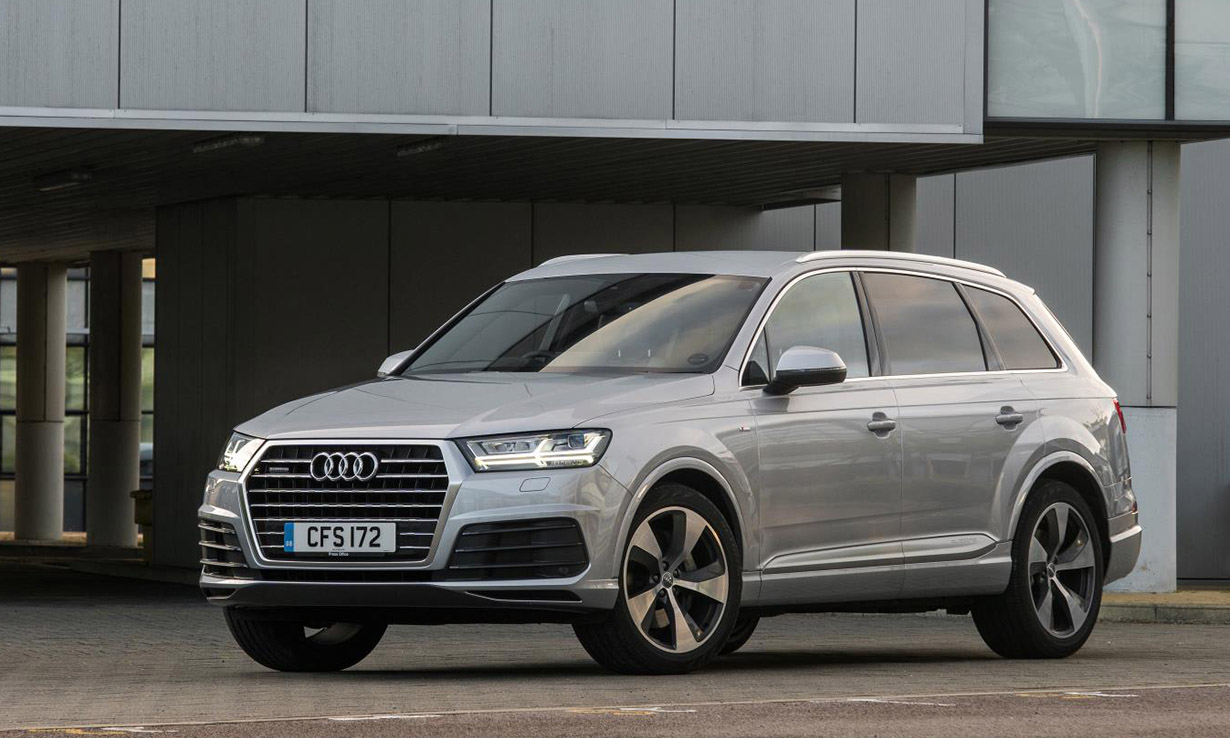 The Audi Q7’s 6’6″ width risks a nasty scratch (or worse) if you’re heading down a UK road with a 6’6” width restriction.

Audi is renowned for its ‘quattro’ four-wheel drive cars – despite this, the Q7 (2015-) is only the second full-size SUV from the brand.

It’s practical, with seating for seven people. The only engine available is a 3.0-litre V6 turbo diesel, with a choice of 215bhp and 268bhp power outputs on offer.

It costs more than £48,000. But for this, Audi’s prowess in advanced technology is on show, with the latest driver-assist and entertainment tech available in the Q7. This includes a ‘Virtual Cockpit’ which replaces traditional dials with a large 12.3-inch screen that can also display your sat-nav maps or media.

Find out what our experts thought of the full package in our comprehensive Audi Q7 review.

Cars that barely scrape through a 6’-6” width restriction 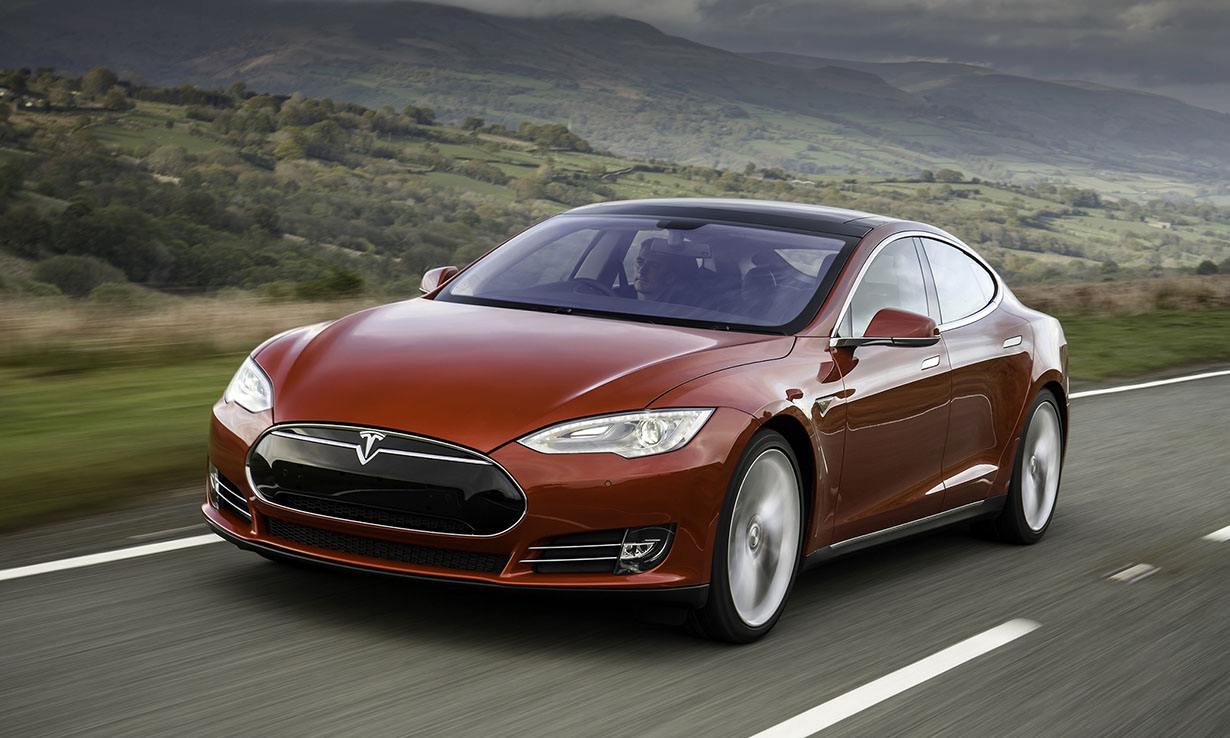 We’ve all seen motorists attempt to travel down roads with very little clearance, but with only half an inch to spare either side, the Tesla Model S’s 6’5″ width means you’d really be pushing your luck to travel down a road with a width restriction and avoid a scratch.

The Model S is Tesla’s pioneering all-electric luxury performance saloon that has proved a winning formula with buyers.

You’ll need a large wallet to join the club, however, with the Model S coming in at £65,550. But Tesla claims its car has a maximum driving range of around 424 miles, which is similar to what you’d expect from a typical petrol-powered family car.

See what we thought of this revolutionary car and find out what range we got in our tests – go to our extensive Tesla Model S review. 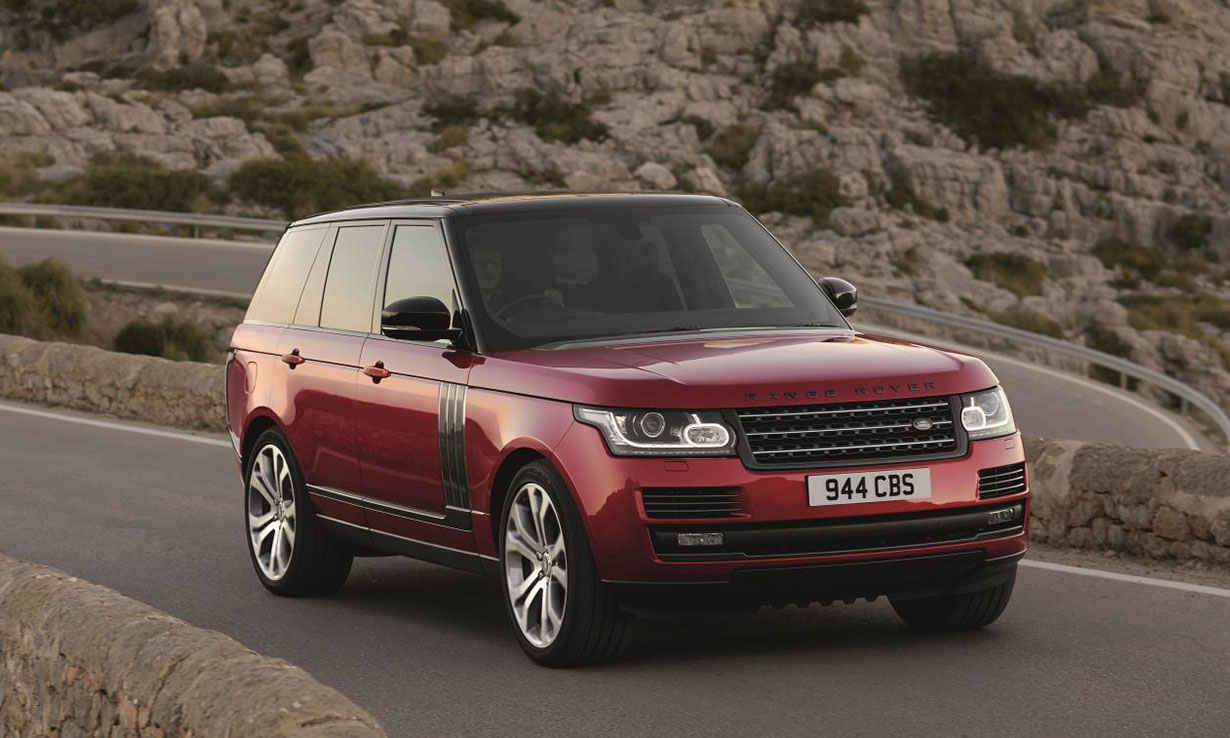 The Range Rover’s 6’5″ width gives you less than half an inch clearance either side to fit though a 6’6” width restriction. And at a eye-watering £76,281, the last thing you’ll want to do is scratch the paintwork.

The Range Rover is regarded as a British icon and the cabin is fitted out with fine leather and a high-end audio system.

It’s the world’s first all-aluminium-bodied SUV. This makes it the first Range Rover to be light enough to be powered by a V6 engine, with a 258bhp TDV6 diesel.

Discover our verdict of this premium car in our in-depth Land Rover Range Rover review. 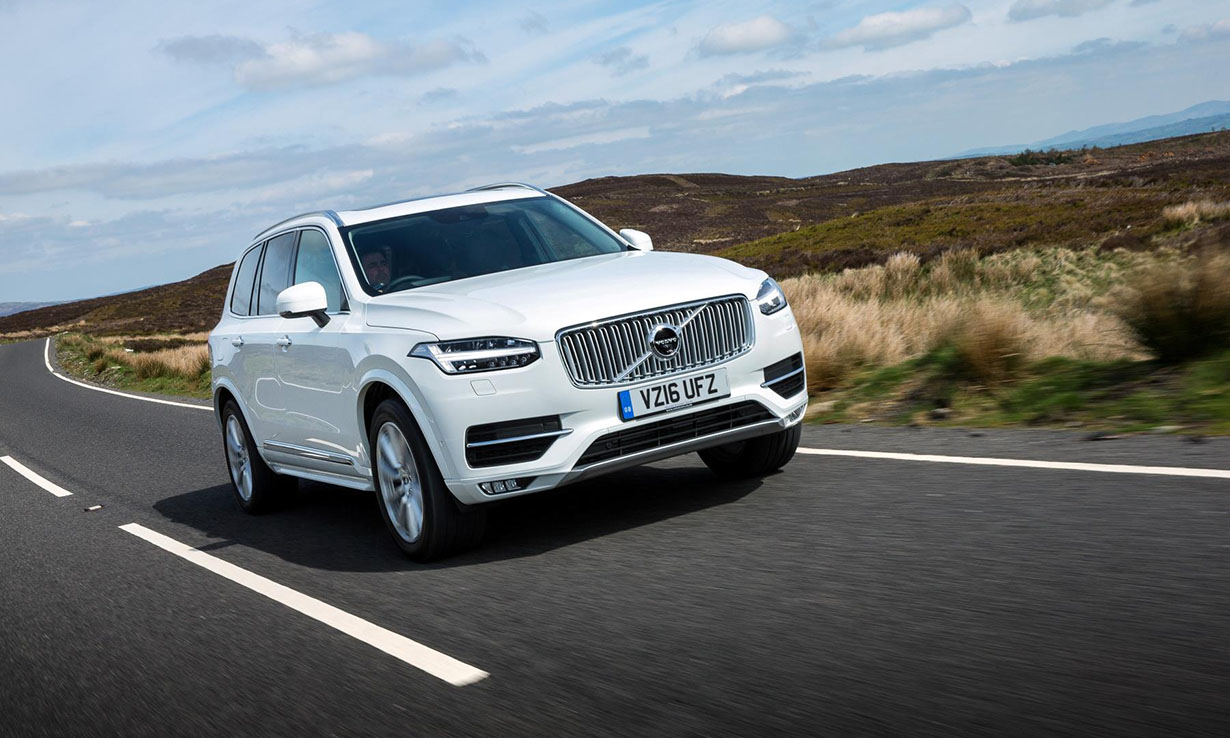 Those that assume only the most luxurious cars would be too wide for roads with width restrictions would be mistaken. Volvo’s flagship family SUV, the XC90, comes in at 6’4″. This gives you less than an inch clearance each side down a road with a 6’6” width restriction – making it not worth the risk.

The plug-in hybrid Volvo XC90 has the same wide width as well.

The second-generation XC90 brings Volvo’s full-size SUV further upmarket, becoming a direct rival for premium rivals from BMW and Audi. But at a lower price, at around £46,000 (the plug-in hybrid will set you back about £10,000 more).

The Volvo XC90 has room for seven people and four-wheel drive, and a choice of three different engines, including a 2.0-litre 222bhp D5 diesel, a 2.0 316bhp T6 petrol and the T8 hybrid.

See whether this is the ideal car for your family in our Volvo XC90 review.

Here’s the full list of cars where width restrictions will be an issue. We list cars that are simply too wide for the typical 6’-6” width restrictions, and those with only up to half an inch or an inch clearance either side: 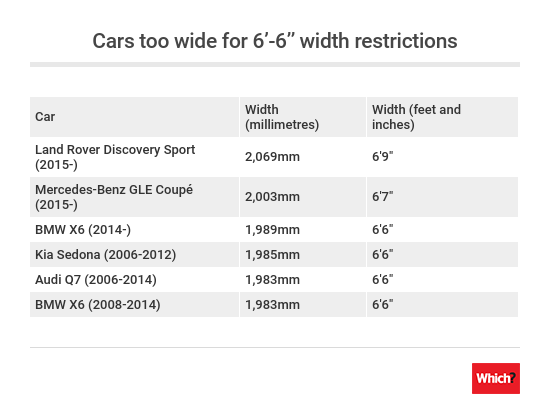 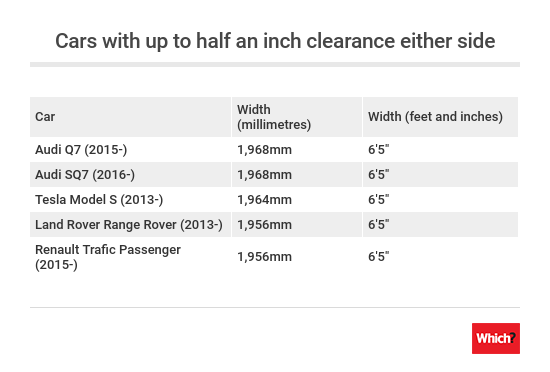 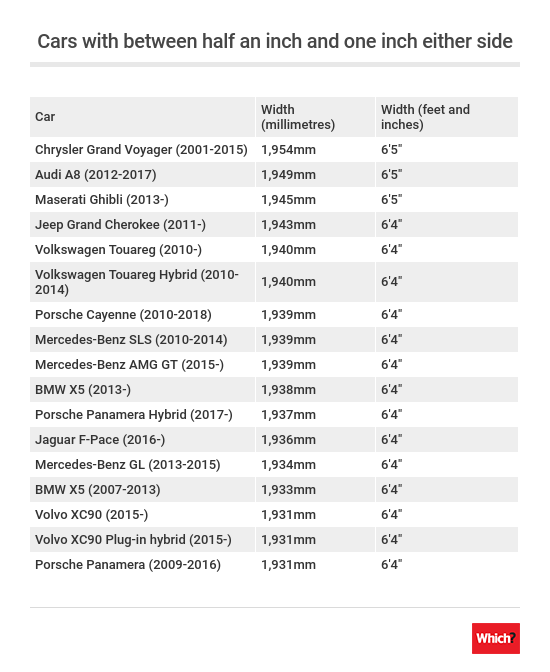 See all of our expert new and used car reviews.