Our test of more than 20 pieces of luggage found a Best Buy cabin bag for less than £100 that will meet even the stingy restrictions of Ryanair, and a Best Buy suitcase for under £80. But there are also a pair of Don’t Buys you’ll want to avoid.

We drop, drag and drown cabin bags and suitcases in our test lab to make sure you buy a piece of luggage that will last. And with airline baggage allowances stingier than ever – from British Airways long haul fares that don’t include checked-in baggage to the measly size restrictions on many budget carriers – we have also found those bags that will let you pack the most in.

If you want to cut to the chase visit our cabin bag reviews, or read on to find out about some of the new pieces of luggage we tested. 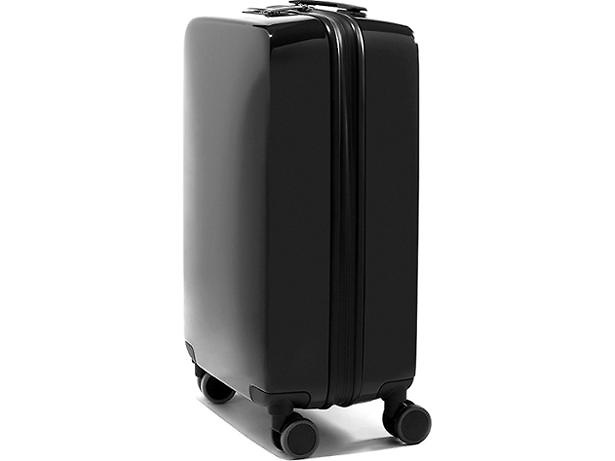 The slick design may be what catches your eye at first, but it’s actually what lies beneath the A22’s hard shell that’s really worth talking about. It may not show, but it’s loaded with smart tech designed to make your trip easier. There’s built-in scales so you don’t over-pack, a power bank to keep your devices charged, and Bluetooth tracking so you don’t lose it in the terminal.

Four wheels is usually a good thing when it comes to manoeuvrability, but strangely there’s no side handle on it. It helps give the A22 a nice, clean look, but there’s no denying that that will make it something of a pain to haul in and out of the overhead storage locker. And weighing a whopping 4kg (before you’ve even put anything in it) means you’d only have a 1kg left to pack your own stuff if flying with TUI. 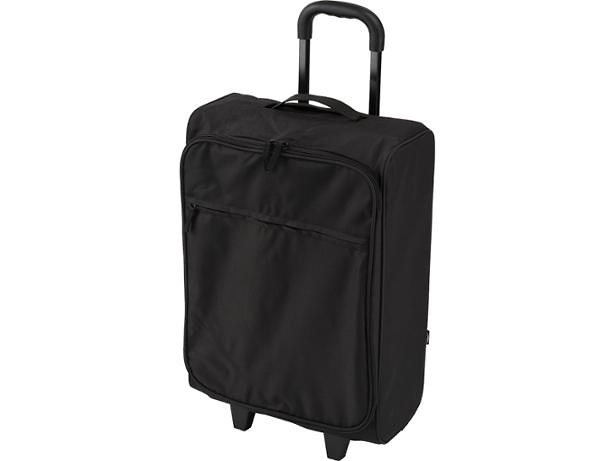 Yes, a cabin bag made by widely loved/hated flat-pack furniture master Ikea and, yes, it will only cost you £18. No matter what way you slice it, that’s an incredibly cheap price. So what do you get for your money?

Ikea believes the Starttid’s main selling point is that it can be flat-packed. It’s what the brand does best. It actually works in reverse here to a conventional Ikea product, in that once you’ve returned from your travels and emptied your packing you can then fold the Starttid up and slot it away somewhere inconspicuous. It’s understandably basic other than that – it doesn’t have a side handle, although given its compact size and lightweight soft shell that might not end up being too much of an issue. It has two plastic wheels and its trolley handle isn’t adjustable to different heights – it’s either extended or retracted.

If it performed even half-way decently in our tests this could be the bargain of the year. Find out how it fared in our full Ikea Starttid review. 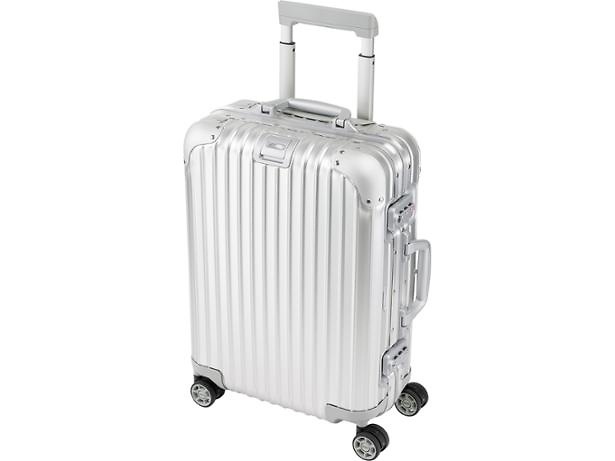 An absolutely gorgeous piece of design – and the Rimowa Topas is priced like it knows it, too. If you want a hard carry-on case then they don’t come much harder than this, with an exterior made entirely of solid aluminium. There’s no zips to break or snag as it uses a clasp system instead, which should help with waterproofing – in theory, at least.

While it fits aboard a number of major UK airlines, when it comes to its external dimensions, weight is a concern. It comes in at a heavy-hitting 4.5kg before you’ve so much as packed a toothbrush, so you may not be able to make full use of its space before hitting the allowed limit.

At this price you expect performance, but does its hefty metal chassis prove more a burden than a boon? Find out in our Rimowa Topas review. 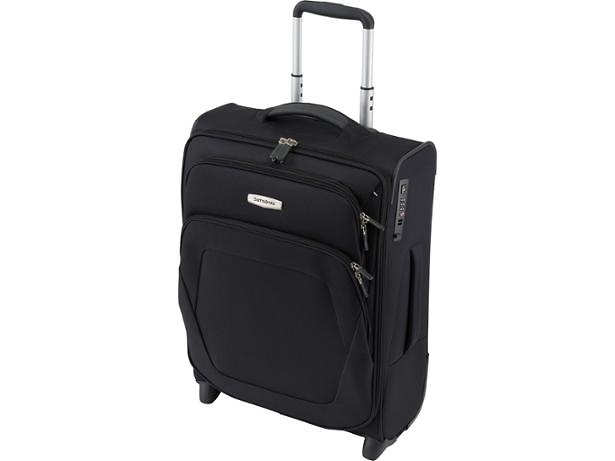 Picture a cabin bag in your mind. Chances are it looks like the Samsonite Spark SNG. It may not be the most exciting carry-on in the world, but it comes at a fair price.

With two external pockets and two internal pockets it’s built with practicality in mind, and it can expand when fully packed to allow you to fit even more in. Beware though, if you do choose to expand it it may not fit on board your airline of choice. Soft-sided cases like this one often perform better than hard-sided models in our drop test as they’re less likely to crack, but they can be iffy when it comes to letting in water or splitting at the seams.

Did this bag split its sides? See what our testing revealed in the full Samsonite Spark SNG review. 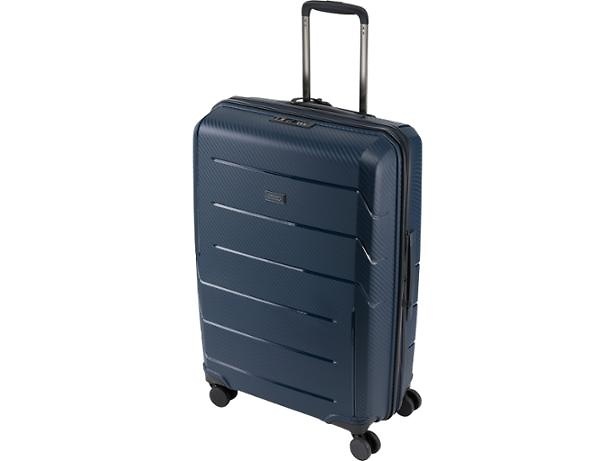 Hard-shelled luggage usually costs an arm and a leg, so a case from a reputable brand at a reasonable price has appeal. Although with a capacity of 76 litres it’s a fair bit smaller than some suitcases you’ll see (larger models usually place in the 90 to 100-litre range).

It has four wheels rather than two, so you can easily push or pull it alongside while waiting in line at the airport, and there’s a side handle to make taking it in and out of the car boot or off the luggage carousel easier. It unzips straight down the middle, too, meaning that it opens up into two even compartments rather than a base and a lid, which could potentially make it harder to pack to the brim.

Find out how durable it is, whether it’s waterproof, plus how easy it is to manoeuvre in our Jump Ultra Light review. 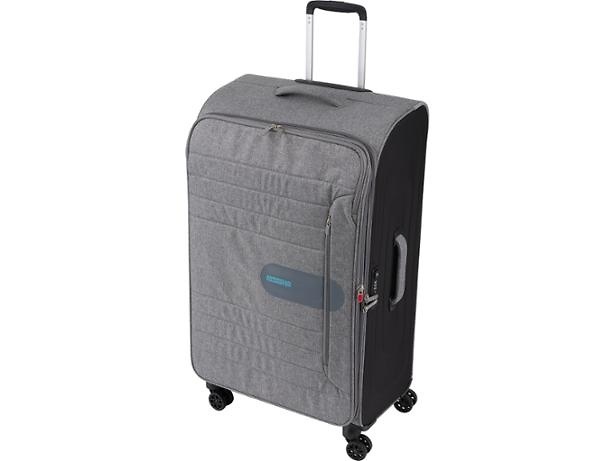 Cheaper still is the American Tourister Sonic Surfer. You get a lot for your money as well – this soft-sided suitcase is absolutely enormous. The expandable body means that the already sizeable 97 litres can stretch to fit in a whole 113 litres. Just how useful that much space is when airlines restrict you by weight is debatable, but at the very least you can pack in a couple of extra towels or that second pair of flipflops.

It has external and internal pockets, although seeing as you can’t take it on board only you can decide how useful that is. It also sits on four wheels to make carrying such vast amounts easier and, while the main case and wheels are made of fabric and plastic, the adjustable trolley handle is metal.

Can you possibly get a good suitcase for under £80? And can you trust fabric to keep the water out? See how it got on in our full American Tourister Sonic Surfer review.