A massive 129 cars available to buy exceed the standard size of a UK parking space. As car sizes grow, even family cars such as the Ford Mondeo, Volvo XC90 and Audi A6 are too long. And the Mercedes-Benz S-class Hybrid and Nissan Navara (2005-2015) pickup truck overhang spaces by around half a metre.

No car is too wide for a parking space, but the Land Rover Discovery Sport and Mercedes-Benz GLE Coupé give you little more than 30cm to get out of the car if a similarly wide car is parked next door (excluding the wing mirrors).

Want to know which car you should buy? See our top cars for 2018.

Which cars are the biggest?

In the graphic below, we have selected two of the longest cars currently in production – the Mercedes-Benz S-class Hybrid and Jaguar XJ. Both will overhang a parking space by far, even when parked right up to the front of the space.

Some mainstream family cars are creeping up in length, too, with the latest-generation Ford Mondeo now being 7.1cm too long. 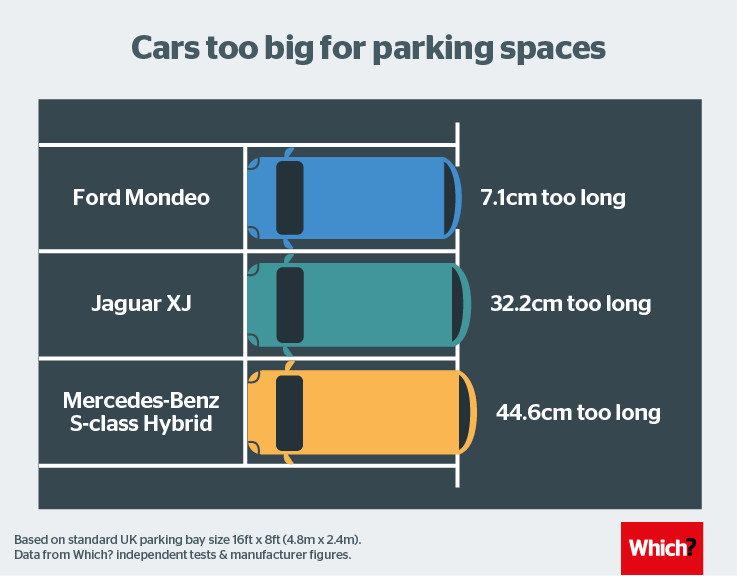 What you need to know about parking spaces

Disabled spaces typically have an extra 1.2 metres hashed area around the size of a standard parking space.

As average car sizes continue to grow, with SUVs and crossovers getting ever more popular, car parks are beginning to introduce wider bays and marked pedestrian spaces when they are refurbished over time.

The British Parking Association (BPA) told us that multi-storey car parks provide particular challenges to growing car sizes, as they’re not easily adaptable and re-building is too costly.

The BPA adds: ‘A good car park will have the right balance of capacity and efficiency as cramming in lots of small bays is obviously counter-productive.’

Below we have selected some of the worst offenders – cars currently in production that are too long for a typical parking space, and others that are so wide it will be tricky to open the doors. And that’s assuming everyone parks perfectly in their parking spaces as well.

No car is too wide for a typical parking space, but with the Land Rover Discovery Sport giving you little more than a capped Bic pen’s length to get out if parked next to a wall, it would be impossible to get out.

If you’re parked next to a similarly large car, you’ll still have little more than 30cm – meaning you’ll have a high risk of getting a nasty scratch. Our width measurements are for the car’s body width – so you won’t get extra leeway by folding in the wing mirrors.

Happier with a smaller car? Check out the best small cars for 2018. 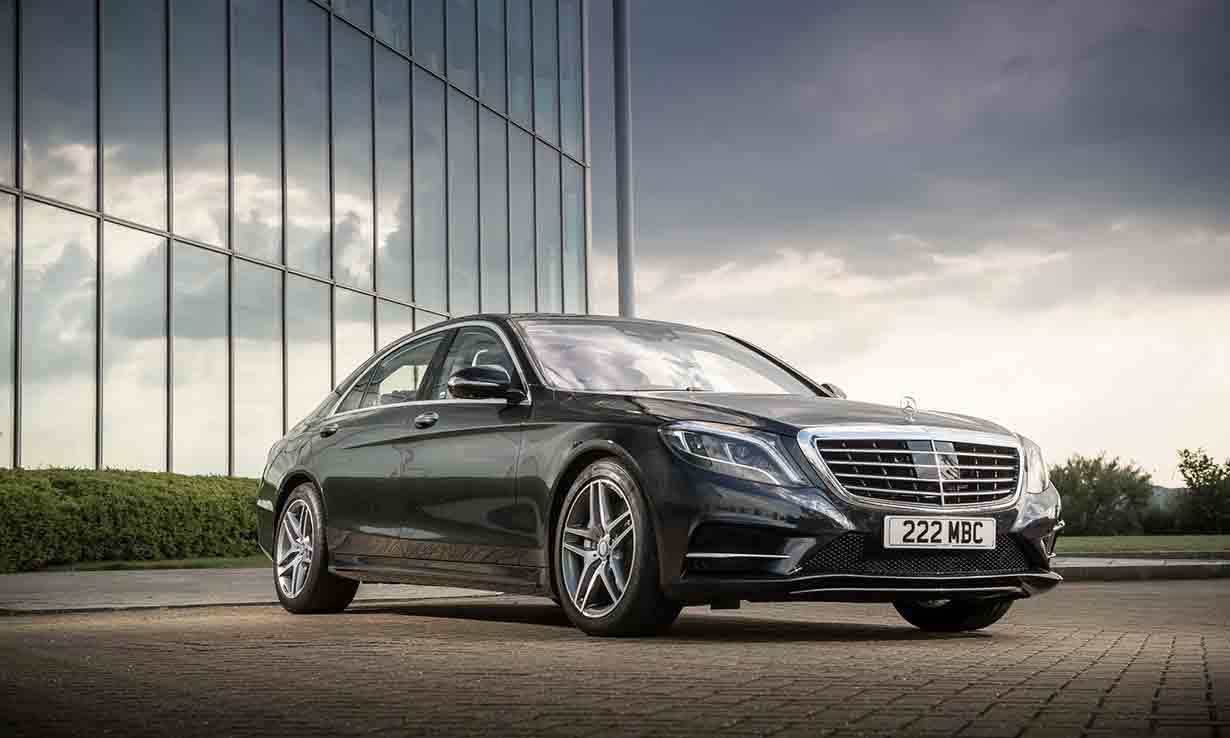 The hybrid version of the Mercedes-Benz S-Class luxury saloon is a massive 44.6cm too long for a standard UK parking space, meaning you’ll be overhanging by around half a metre when you park. Not only does this risk expensive scratches from other cars passing by, it will make navigating many UK car parks a challenge, as they simply weren’t designed for cars this long.

Nevertheless, the specification of the Mercedes-Benz S-Class Hybrid looks truly impressive – Mercedes claims this saloon has a fuel economy of more than 100mpg and CO2 emissions of just 65g/km, without sacrificing impressive performance and a fun drive. We put it through our expert independent lab tests to see whether it delivers.

Find out whether this is car worth considering, despite its length, in our Mercedes-Benz S-class Hybrid review. 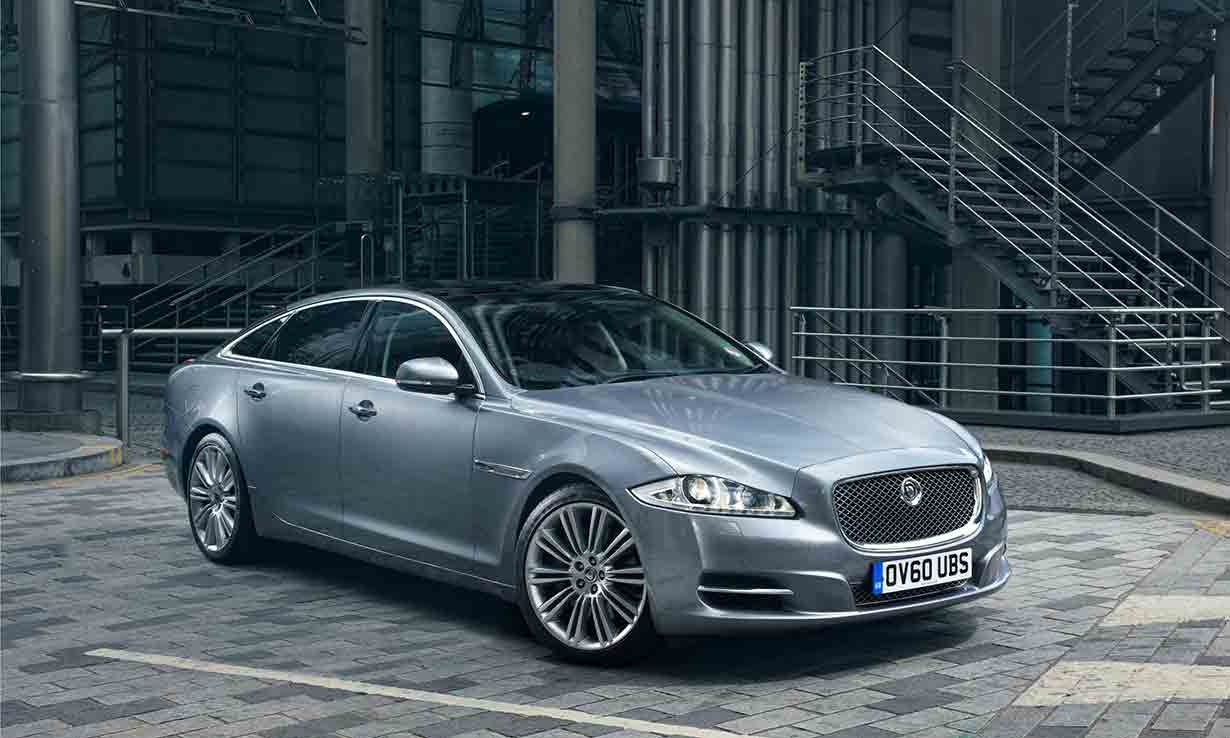 There’s no way you’ll be able to hide the Jaguar XJ’s excess length. At 32.2cm too long for a standard parking space, you’ll have an overhang of more than a foot – no matter how perfectly you park.

The Jaguar XJ is an icon of British cars. But while the 1968 Jaguar XJ defined the traditional Jaguar saloon look for more than four decades, the latest XJ looks nothing like the original. Nor does it look like Mercedes, BMW or Audi rivals, as Jaguar begins a fresh start for the XJ.

Nevertheless, stylish looks remain and there’s plenty of V8 power under the hood.

Find out whether this is a car worth considering, regardless of size, in our expert Jaguar XJ review. 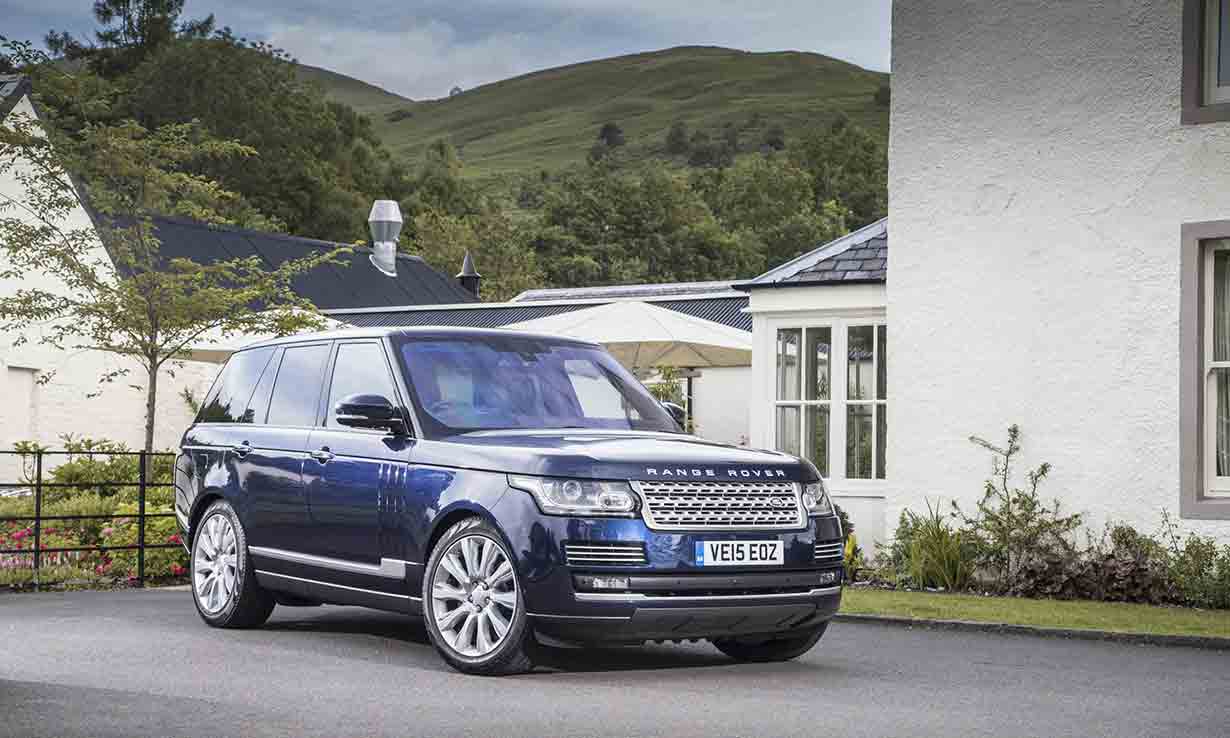 Land Rover brought in major changes after the 2002-2012 Range Rover model was criticised for its lumbering handling, with the latest model sporting a sleeker profile and a massive weight reduction.

Sporting the world’s first all-aluminium-bodied SUV, the current Range Rover is 420kg lighter – nearly half a tonne. The move to a V6 engine with a 258bhp TDV6 diesel has the potential to have done wonders for the fuel economy.

See whether the major changes have revitalised the Range Rover and made it a car worth buying in our comprehensive Land Rover Range Rover review. 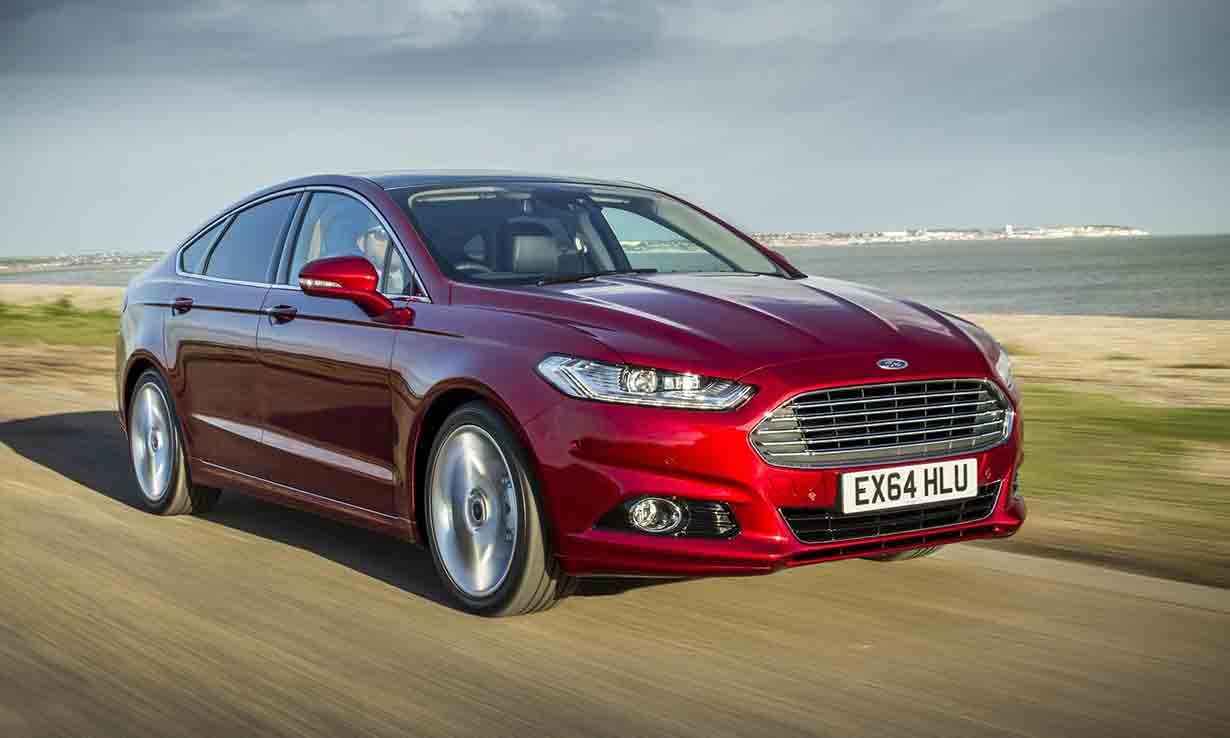 It’s not only expensive luxury cars that are now too long for typical parking spaces – even mainstream family cars are creeping up in length. The previous generation Ford Mondeo (2007 to 2014) was 4.4cm too long, and now the latest Ford Mondeo is 7.1cm too long.

This makes it just that little bit harder to park – especially with its unwieldy 12-metre wide turning circle.

The Ford Mondeo has long been seen as an ideal choice for a practical family car. There’s enough room for five adults, plus a huge boot as well.

Diesel and petrol EcoBoost engine options are available, with most models having a choice of six-speed manual or dual-clutch automatic gearboxes. and there’s a Ford Mondeo hybrid option available as well.

Could this be your ideal family car? We leave no stone unturned in our definitive Ford Mondeo review.

Cars where you’ll struggle to open the doors 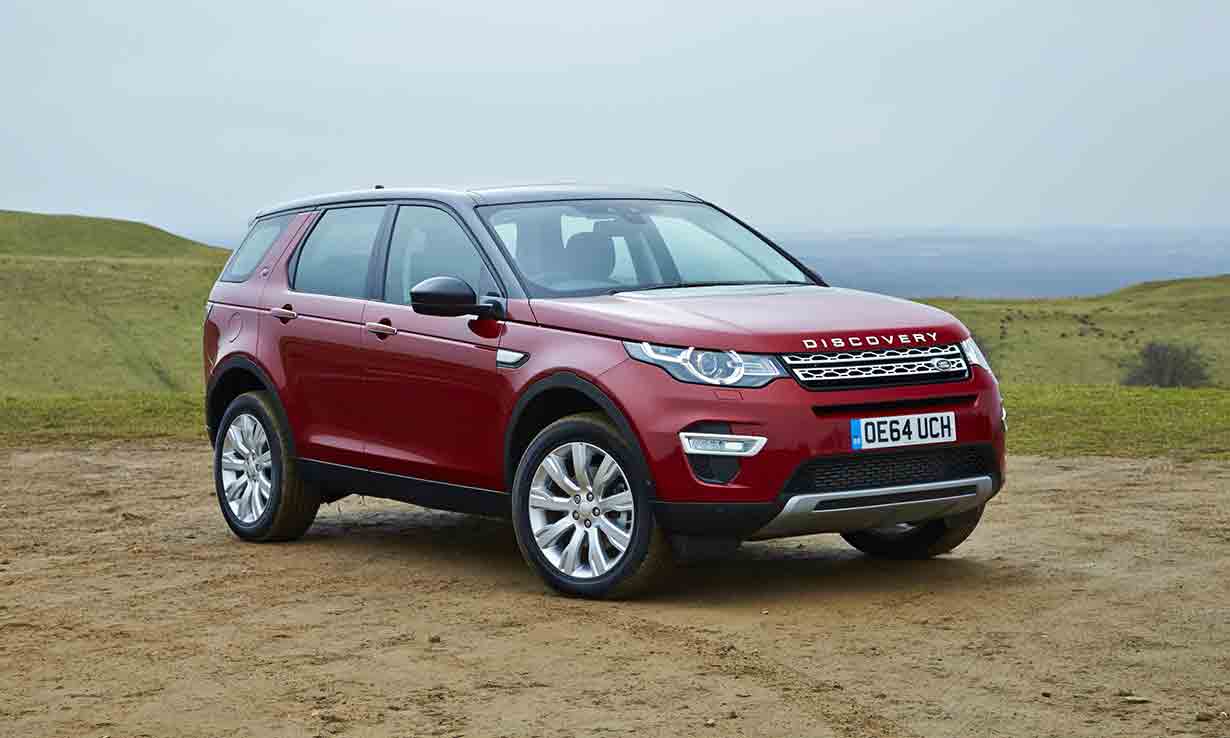 Length is not the only problem for parking modern cars. The Land Rover Discovery Sport gives you only 16.55cm clearance each side for the space – little more than a capped Bic pen – and that’s assuming you’ve parked perfectly.

You won’t be able to get out if parked next to a wall, and it will be a challenge with a similarly sized car parked alongside.

Nevertheless, you still get a proper Land Rover off-roader SUV with four-wheel drive as standard. In the UK, the only engine option is a 2.0-litre turbocharged diesel.

If you don’t mind searching for a hatchback to park next to, see what we thought of the Land Rover Discovery Sport in our exclusive review. 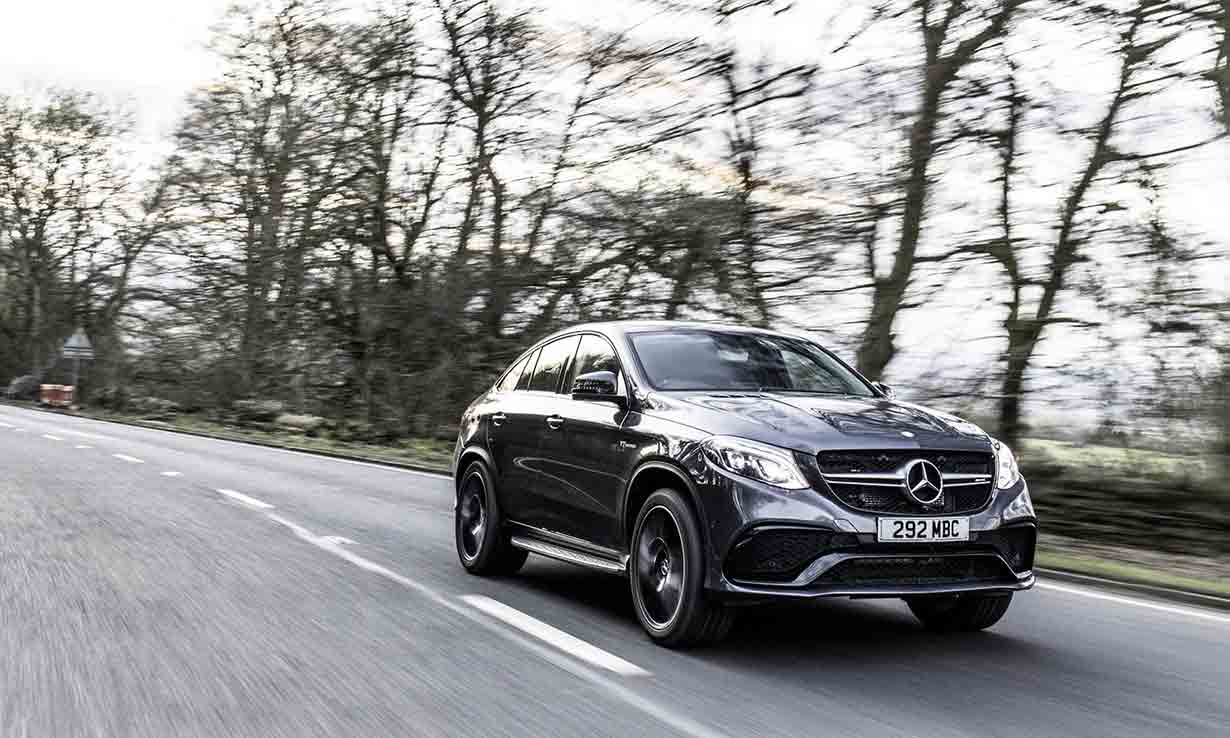 The Mercedes-Benz GLE Coupé may be luxury inside, but this giant coupé isn’t a luxury to park. Not only does it give you a not-so-generous 19.85cm room for a standard parking space each side – about the width of a piece of A4 paper – it’s long as well. It exceeds the length of a typical space by 10cm.

Following in the footsteps of rival BMW’s X6, Mercedes has given its GLE SUV the sporting treatment – a trend which has produced some enormous cars.

There’s room for five adults and a large boot, and it’s agile too, with various diesel and petrol engine options, including an AMG version with a cool 577bhp of power.

All have four-wheel drive as standard.

See whether the size is worth it in our Mercedes-Benz GLE Coupé review. 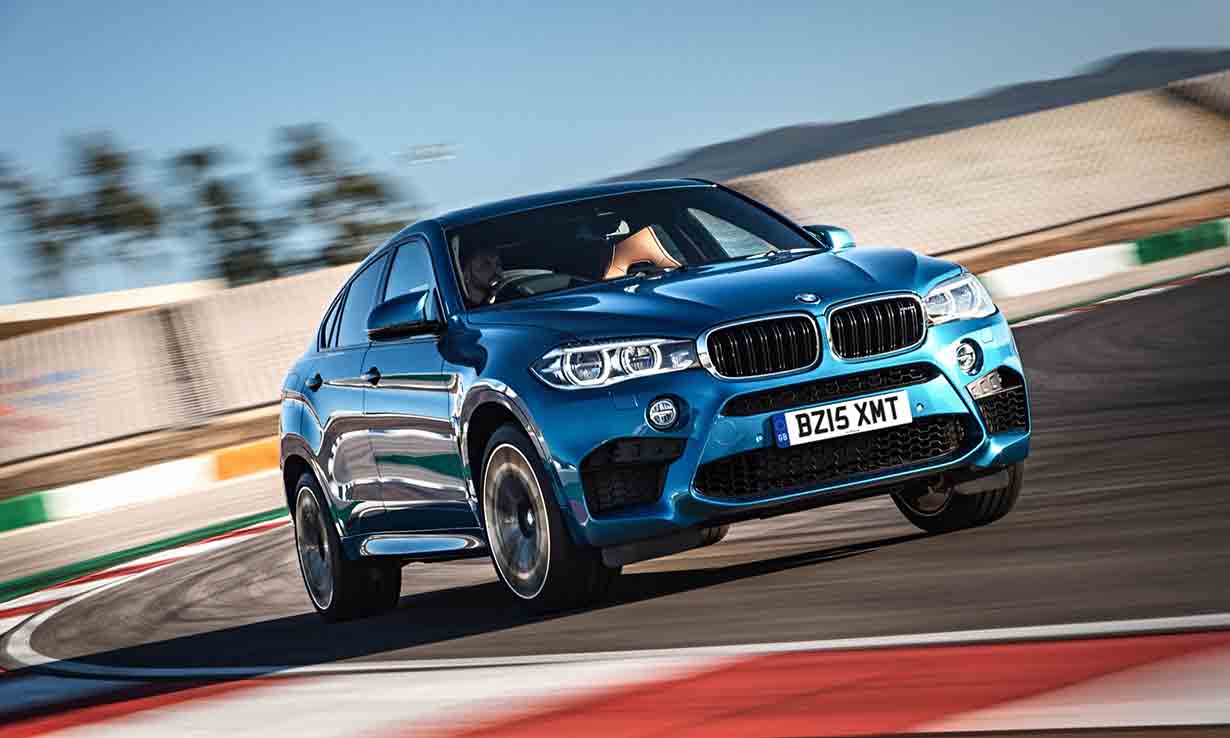 With BMW’s big car trend-setting upmarket sporty SUV coupé, you only have 20.55cm to get out each side – plus this massive SUV is 10.9cm too long for the space as well.

Based on the also-large BMW X5 SUV, the X6 combines a rugged full size 4×4 with a dynamic chassis and performance that has proved a winning combination with buyers.

Is the potential difficulty of parking it worth it? We reveal all in our expert BMW X6 review.

Which cars are too big?

Cars too long for a standard UK parking space 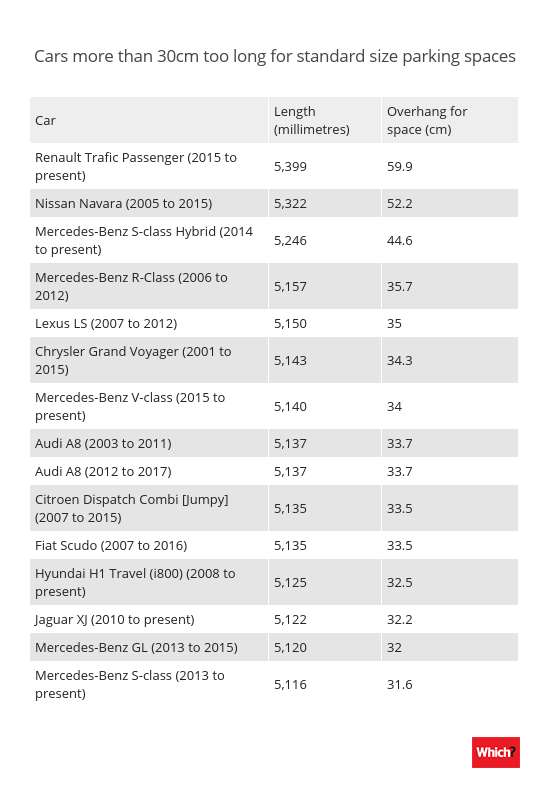 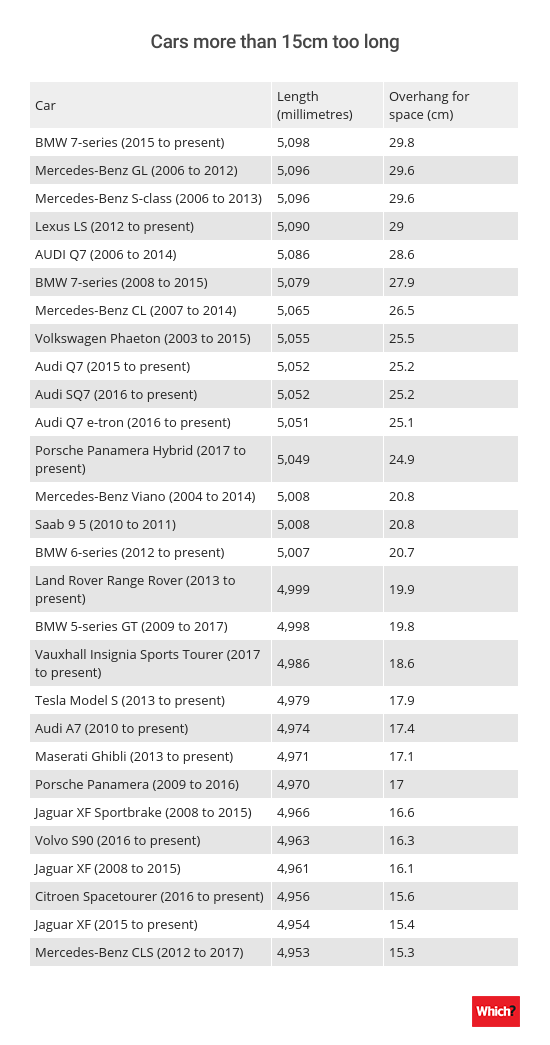 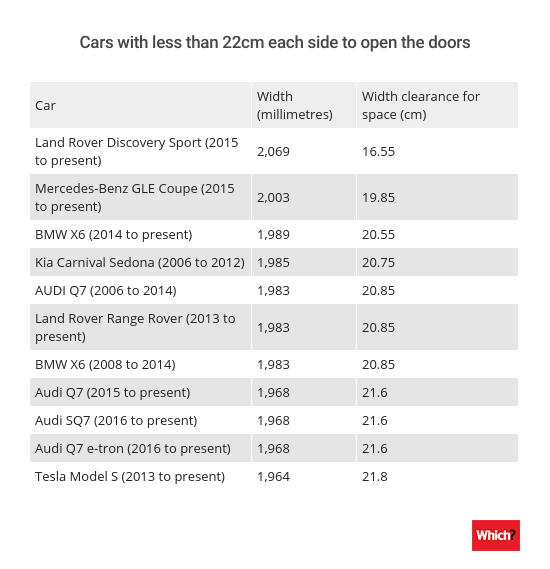 Make sure your next car is a car you can trust. See our expert new and used Which? car reviews.