New undercover research from Which? reveals that you can save £74 on average and get your computer back a week sooner by choosing a local independent computer store over a national chain.

Independent stores were also far more likely to get computers back in full working order with no files lost versus national chains, which in the majority of cases lost all our files.

Our study, which looked at iSmash, Knowhow and independent stores throughout the UK, saw charges as high as £305 for what should have been very simple jobs, and repairs that took almost six weeks, showing a clear discrepancy between the quality of service consumers expect and what some shops actually deliver.

Best Buy laptops – take a look at the best models if yours is beyond repair.

Our research into laptop repairs

We introduced identical faults into 18 Windows laptops. The problem was a simple software issue that could be fixed in a matter of minutes by someone with good technical knowledge.

We then used secret shoppers to take these to 18 different repair shops, with six examples of Knowhow, iSmash and independent stores all going under the microscope to see how well they conducted repairs, how fast they were and how much they charged.

The graph below shows the scale of the differences between the best and worst brands. But it also shows that iSmash in particular was mercurial in its performance, providing one of our best experiences in addition to our worst and most expensive.

As you can see above, iSmash provided both the fastest and slowest repair time, and had the joint-cheapest and most expensive repair costs.

The store that performed best – a branch in London – managed to fix our problem on the day we dropped off the laptop, charged our secret shopper £45 and didn’t lose any of our files.

This was a far cry from the experiences our shoppers had in our other iSmash visits. On two occasions we were charged £295 and £305 for unnecessary premium solid-state drives (SSDs), and another customer waited as long as six weeks to get their laptop repaired.

In the case of the laptop that was out for repair for six weeks, the store in question gave our shopper a half-price discount as an apology. It said an initial delay was caused by a lack of spare parts, despite its final repair not involving any spare parts whatsoever.

In response to our findings, an iSmash spokesperson said: ‘Although we strive to always provide the most consistent service possible, this can of course result in slightly differing services provided to customers from shop to shop. We appreciate there’s always room for improvement and are continuing to review our internal processes to ensure that any issues are resolved as quickly as possible.’

Two of the Currys stores we visited – both in the same city – told us they would not be able to repair our laptops because they were not on the list of devices they were allowed to repair. Other stores in other parts of the UK accepted identical models for repair, highlighting possible inconsistencies between store policies.

Of the remaining four laptops that Knowhow did accept, prices for repairs ranged from £60 to £136, not including an additional £120 fee for data recovery that some of our secret shoppers opted for. In the most expensive case, our shopper was sold a copy of Windows 10 for £100. This is an expensive mistake: a new Windows 10 licence was unnecessary for the repair Knowhow chose, especially because the valid licence key was affixed to the laptop, as is commonplace.

At another store, a repair was attempted without the permission of our secret shopper, who had asked to be contacted before any work was undertaken. After expressing dismay at this, Knowhow told the shopper it could undo the repair. In fact, the company had already attempted to reinstall Windows 10 on the shopper’s laptop – an irreversible process that had wiped all the files that were on the machine. So if it had reversed the fix (which ultimately saw a new hard disk installed into the laptop), the machine would have been returned without any data on it.

A Currys PC World spokesperson said: ‘We’re surprised and disappointed to hear that in a small number of cases Which?’s secret shoppers did not get the service we’d expect, and we’ve asked Which? for more details so we can investigate further.’

Independent stores didn’t always manage to pick the perfect solution to our problem, but five out of six successfully recovered all of our files (and the sixth one most of our files) and got our laptops working again without replacing any hardware. Independents were consistently the fastest, too, and in most cases they were in constant contact with our secret shoppers, letting them know what their repair plans were and offering extra advice once the repair was complete.

Occasionally our shoppers felt a little overwhelmed with jargon, but these companies, often sole traders, never attempted aggressive upselling techniques and our shoppers were happy to have been given more information rather than less, which was often the case with the bigger brands.

The most expensive fix cost £102, which was conducted by a London shop. This price included a full diagnostic test, and a tune-up and exterior clean of the PC. Although, there was no option for the secret shopper to pay any less, so we were glad to see at least some extra work was done to justify the higher price.

How to get the best laptop repair

As with a purchase, it pays to do some preparation before taking your computer to a repair shop. Use our diagnosis tool for non-responsive computers below to help you get a better idea of what might be wrong, so you can go to your repair shop of choice armed with more information. This will help the repair shop diagnose the problem more quickly and will give you the confidence that your computer is undergoing the right treatment. 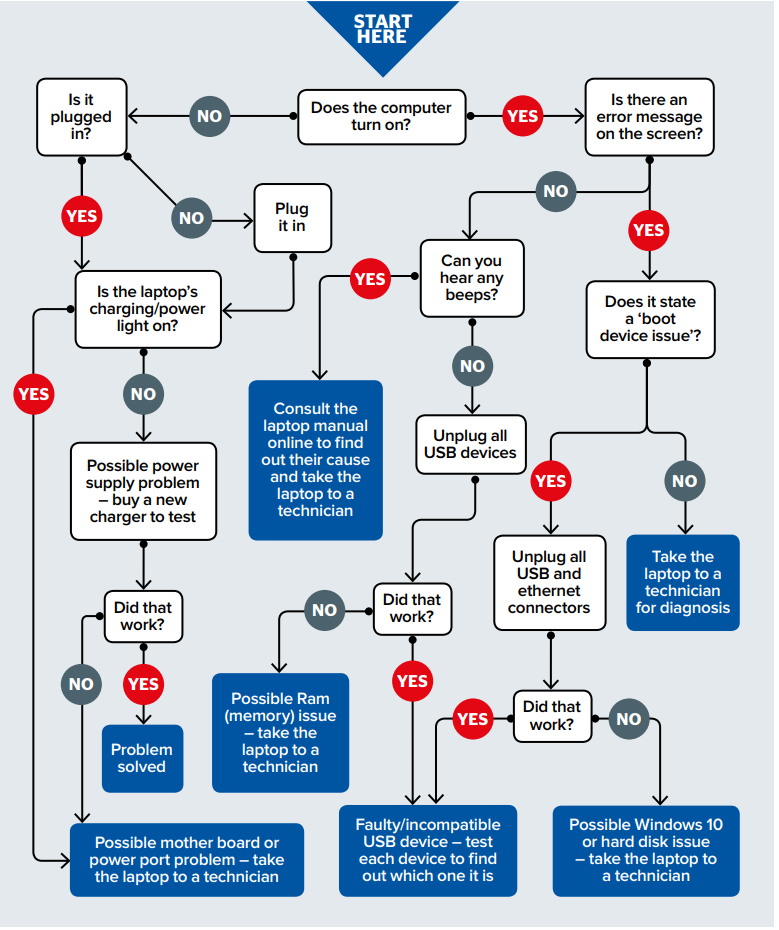 We also recommend booking an appointment; our secret shoppers turned up unannounced and sometimes this led to longer wait times and more hurried experiences. An appointment would probably have got them more attention.

If the repair is likely to cost more than the laptop is worth (if it’s a very old laptop, probably around £200), ask whether you can simply get your data recovered instead of having a full repair. This should be cheaper and, unless there’s been a catastrophic hard disk failure, easy to do.

For advice on dealing with computer problems, visit the Which? Computing Helpdesk website.