Samsung, the biggest TV manufacturer in the world, still makes curved TVs. In fact, they make up about a fifth of its 2018 range, while all other manufacturers are abandoning the idea. Here we look at the pros, the cons, and insight from our test labs to see if there’s any point in choosing a curved TV over a flat one.

We started testing curved TVs in 2015 and we’ve gone on to review 75 of them. Even when other manufacturers were making curved TVs, they were only really dipping their toe in the water and it’s clear they didn’t like the temperature. Of those 75 only nine weren’t made by Samsung.

The fact that Samsung continues to make curved TVs presumably means people are buying them. There is a certain allure to the subtly angled glass; it’s different, a break from convention and a conversation piece in your living room. But are there any real benefits beyond a pleasing appearance and an urge to stand out?

The benefits of curved TVs

People have been watching flatscreen TVs for decades and the world wasn’t exactly crying out for something new, but curved screens came along anyway and were purported to be the next big thing.

The subtle curve was supposed to increase how immersed you are when watching, in the same way as the screens you see at IMAX cinemas. Watching a film on an IMAX screen is quite an experience, but those screens have the added benefit of being gargantuan (the one in London Waterloo is 26 metres wide and 20 metres tall). A curved screen that size makes it seem as though the display is wrapping around you, bringing you into the picture while making it easier to see things in the peripheries.

Whether that immersion translates from 26-metre screens to 55-inch ones is debatable, but having a curve on a TV does increase the field of view. You can see more of the screen because the edges curl in, but the difference is minimal and arguably not necessary. 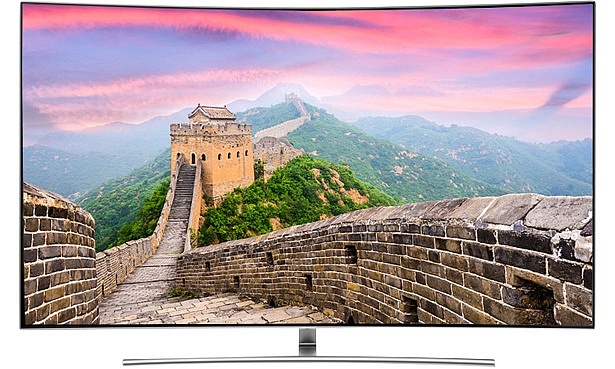 Does the curve have a bearing on picture quality?

It’s difficult to predict how good a TV’s picture quality will be. Price can be an indicator, and the type of display can too, but we’ve seen plenty of expensive sets fall foul to poor motion control and dodgy contrast.

The same is true for curved TVs. We’ve found Best Buys with screens that showcase exceptional detail and colour accuracy, but there are plenty that have underwhelmed with pedestrian picture quality that is neither hindered nor aided by the curve of the screen.

It may not have a bearing on sharpness, colour and contrast, but there are other elements of picture quality that curved TVs have struggled with in the past.

How does it affect viewing angles?

The clarity, contrast and colour accuracy of a screen will always be affected as you sit at an angle to it, but the severity of the change differs from TV to TV. We test the viewing angle of each TV we review, so you know how much the picture quality will be compromised if you aren’t sat dead on to the screen. The edges of a curved screen turn away from anyone sat at an angle to it, so you would expect that curved TVs would have a worse viewing angle, but is that the case?

In 2018 more than 60% of the curved TVs we tested scored just two stars for viewing angle; 39% of flatscreen TVs got the same score, which is 20% lower than their curved counterparts – but still high.

The number of TVs getting four or five stars was even lower: 39% of curved TVs got four stars while only 17% of flatscreen sets managed it. A mere two TVs managed five stars for viewing angle, and both were flat.

This tells us that the curve of the screen doesn’t really have a bearing on viewing angle. It may be more of a challenge to make a curved screen that looks good from all angles, but it’s not impossible. Clearly, though, you’re more likely to have a good viewing angle on a flatscreen TV. In our test, 61% have three stars or higher.

On unfortunate side effect of a curved screen is the increase in reflections. The angled edges act as a net, refracting the light back onto the screen. As a result we generally don’t recommend curved TVs despite the fact they sometimes score highly for picture and sound quality as well as ease of use. They are even Best Buys in some cases, but conventional flatscreens are almost always the better option.

This doesn’t seem to be as much of an issue in 2018. The number of curved screens scoring two stars for viewing angle is more alarming. Handily, most curved TVs have a flatscreen counterpart with the same technology and specs, so you can see in our reviews whether the flatscreen option is the better choice.

Ultimately, if you like the look of curved TVs and feel more involved in the action when you’re watching something on them, then it’s no longer the case that they will always have poorer viewing angles and more severe reflections than then their conventional flatscreen cousins. Check all of our curved TV reviews to see which ones get our seal of approval. 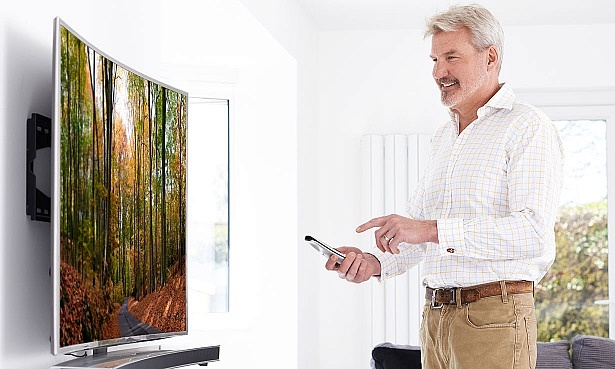 Samsung has a range of curved TVs to suit most budgets. Here are three that range from low-cost to high-end.

Samsung QE55Q8CN This curved QLED TV is one of Samsung’s most advanced. It uses the Q Picture engine for increased colour accuracy and detail. It also has the clever ambient mode feature, which allows the TV to display works of art or mimic the wall behind it, and a separate connections box to help the TV look neater.

Samsung UE55NU8500 This isn’t a QLED set, but it is at the top end of Samsung’s LCD range. That means more time will have been spent tuning the speakers and ensuring the balance of contrast and colour is just right. You can read our review to see if that adds up to a Best Buy.

Samsung UE49NU7670 This one of Samsung’s cheapest curved TVs for 2018, but does the lower price also mean that the viewing angle will be worse? We know from our years of testing that quality doesn’t always follow price, and Samsung’s cheaper sets have excelled in the past. Read our review to see if the viewing angle on the 7670 is better than similarly priced flatscreen sets.

Browse our Best Buy TVs to see if any curved models make the grade.