Some everyday products – from digestives to dishwashing tablets – have been getting steadily smaller for years, but it might not always be obvious, and the kicker is that often prices don’t shrink along with pack sizes.

Eagle-eyed Which? members have been sending us examples of supermarket products they suspect have shrunk. We’ve done some digging into the data to see what’s happening, as well as consulting experts to find out what’s behind all of this.

Supermarkets compared: which are the best and worst supermarkets for 2019?

Which products have shrunk? 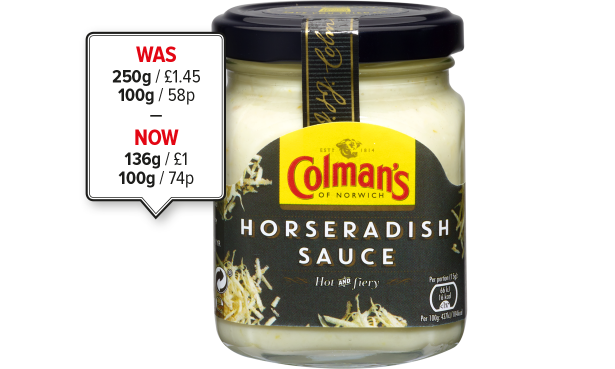 The most commonly mentioned products were Colman’s sauces. A lot of you noticed they had reduced in size but felt you were still paying about the same.

Our research shows that Colman’s horseradish sauce was downsized from 250ml (costing £1.45 but frequently on offer across the big  supermarkets at £1) to 136g.

The new smaller size is hardly any cheaper, costing £1 to £1.20, and it’s less likely to be on offer. 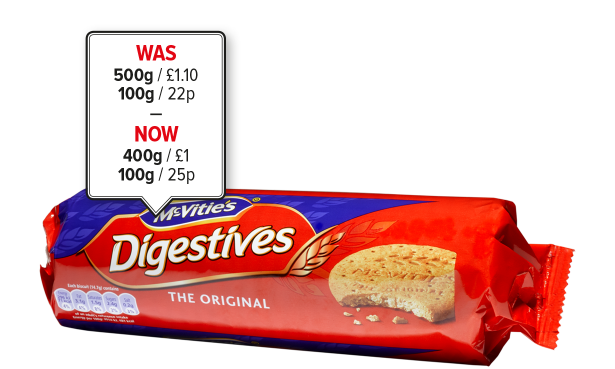 McVitie’s made news last year by getting on the front foot and announcing pack reductions across its digestive biscuits range.

Regular Digestives packets shrunk from 500g to 400g, Digestives Lights from 400g to 300g, and the chocolate ones from 300g to 266g. Pladis, the multinational company that owns McVitie’s, attributed the change to the rising cost of ingredients and changes in the exchange rate, which it was unable to absorb through the business.

It told us it had dropped the recommended retail price (RRP) for plain Digestives from £1.25 to £1, but at Asda the packs were being sold at £1 both before and after the shrink. At Tesco they were £1.10 before and £1 after – not a proportionate drop. 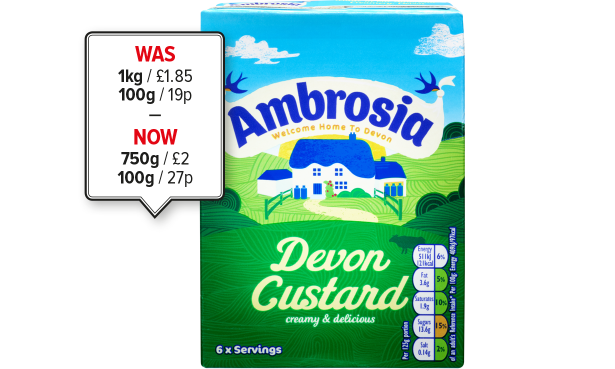 The 1kg pack of Ambrosia Devon Custard vanished from all stockists (Asda, Morrisons, Sainsbury’s and Tesco) around November 2017, to be  replaced with a 750g pack.

It cost £1.85 at Morrisons and Sainsbury’s before and after the change. At Tesco the 750g pack was actually more expensive: £2 instead of £1.65 for the kilo size.

Premier Foods, which owns Ambrosia, pointed out that it had ‘simplified the range’ by eliminating both the 500g and 1kg packs and replacing them with the 750g pack.

But the price remained around what it had been for 1kg, rather than halfway between the two. So even taking into account the price per gram for a 500g pack, everyone is being forced to pay more for less.

Where can you pay less for more? See which was the cheapest supermarket in January 2019. 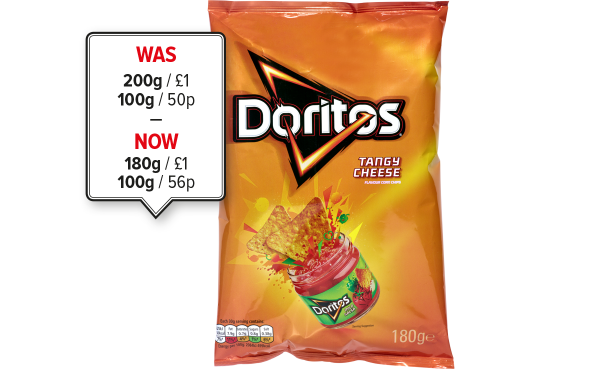 The larger pack of Doritos was being sold for £1 both before and after the shrink at retailers including Asda.

A spokesperson for PepsiCo, which owns Doritos, told us: ‘Like many businesses, we have changed the size of some of our products due to a number of factors impacting the cost of producing them.’ PepsiCo said that it clearly labels packs and reviews it ranges regularly, and emphasised that prices are at the discretion of retailers. 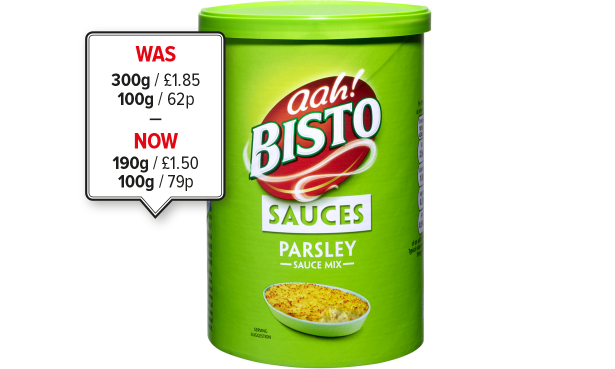 A couple of members rightly noticed when restocking Bisto that the container suddenly appeared quite diminutive, and it had indeed shrunk to 190g from 300g.

Premier Foods, the owner of Bisto, told us it had dropped the RRP. But this still leaves customers paying more per 100g compared with the old, larger size. 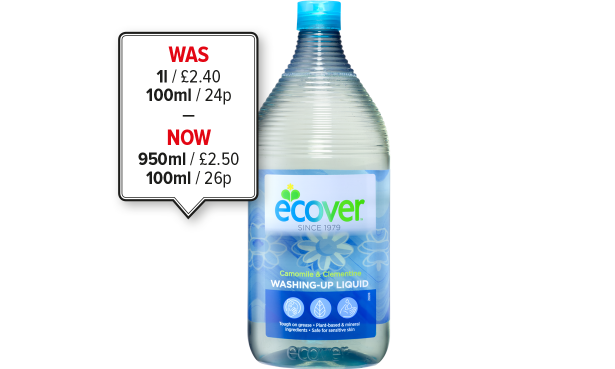 Ecover admitted that it did not change the price or alert consumers to the change in size of its washing-up liquid, but it told us ‘the key change we did make was upgrading the bottle to be made from 100% post-consumer recycled (PCR) plastic because we believe in setting new standards of sustainability in the category’.

You can head to our washing-up liquid reviews to see how Ecover fares in our tests.

Fairy All in One dishwasher tablets 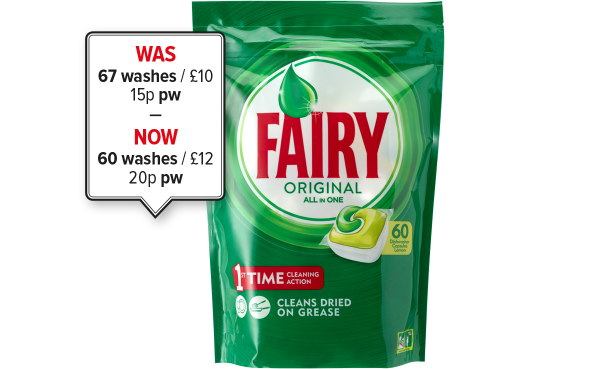 When we looked at shrinking products a few years ago, we found the 70 pack of Fairy All in One Lemon dishwasher tablets had shrunk down to 67 tablets. It has now dropped again to 60 capsules at some supermarkets.

Procter & Gamble, the owner of Fairy, told us that pack-size changes were due to a combination of factors to do with its research and development budget, which had – it claims – resulted in a better product. You can consult our dishwasher tablet reviews to find out how we scored it. 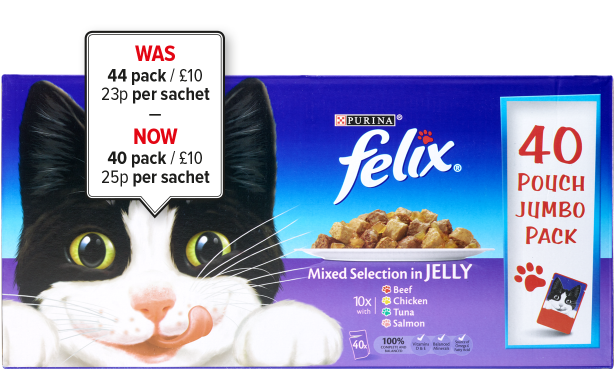 A spokesperson for Purina – which owns Felix – pointed to similar reasoning around the cost of manufacturing. It hadn’t dropped the RRP, but argued that this figure isn’t a true reflection of what the consumer pays, because of the promotional mechanics behind shelf price. Purina said that the smaller 40 pack is regularly on offer for £10.

Purina’s argument goes to show that when special offers are combined with changing pack sizes, it can be even harder to tell what you’re getting for your money.

At Morrisons, the smaller pack was introduced at £10, then hiked up to £12.50 – albeit with regular discounts. 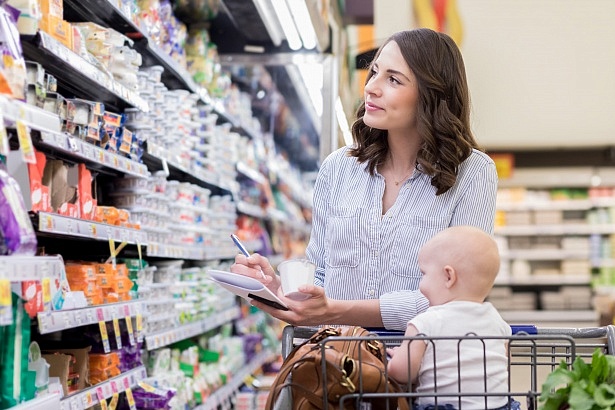 With Ambrosia custard, the larger size was introduced at Asda at a lower price of £1, but this gradually increased to £2, while still occasionally being discounted to £1.

Premier Foods – which owns Ambrosia and Bisto – also told us it had ramped up promotional activity for the launch of the smaller Bisto parsley sauce container at the time of the change.

Find out how to spot and avoid sneaky sales tactics with our guide to supermarket special offers.

Why does shrinkflation happen?

A number of factors influence shrinkflation, and manufacturers gave us varying explanations. One common thread was that the price you pay for their products is ultimately at the discretion of individual retailers.

What the supermarkets say

The supermarkets and the British Retail Consortium told us that the sizing and pricing of products are regularly reviewed and are affected by a number of factors, including commercial negotiations, the cost of raw materials, and industry efforts to manage food waste and portion sizes. 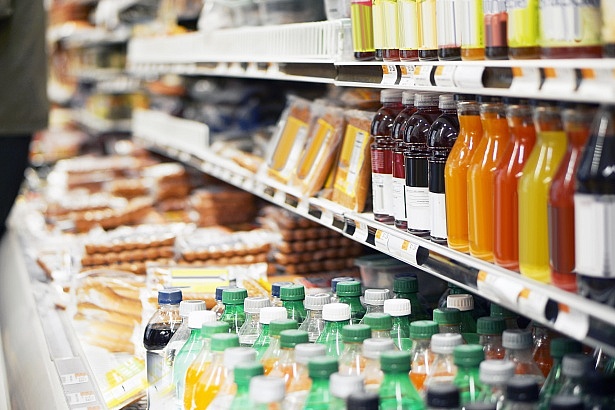 What the experts told us

Ratula Chakraborty, professor of business management at the University of East Anglia, says that ‘shrinking package sizes is a back-door way to increase prices without consumers noticing.

Professor Chakraborty argues more needs to be done to make things clear for consumers. She says: ‘Quoting the unit price alongside the item price isn’t enough. Suppliers and retailers need to be honest – and, if necessary, obliged by law to mark on their packages when the pack size has been reduced, for a period of at least one month.’ 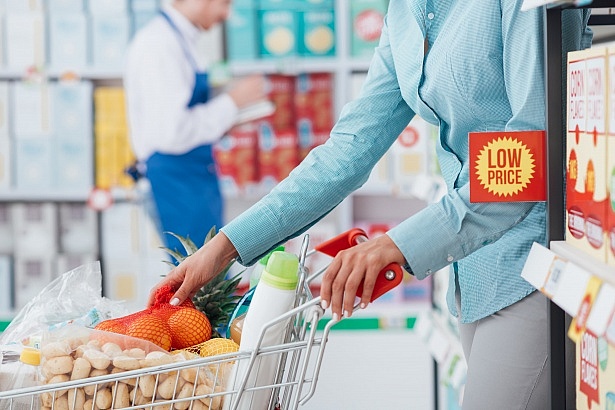 We investigated your submissions, from snacks to household cleaning supplies, and looked into pricing and weight data over the past three years. We tracked prices from 2016 to 2019 using supermarket price-comparison website MySupermarket, which gave us prices in monthly increments at Asda, Morrisons, Ocado, Sainsbury’s, Tesco and Waitrose.