A 50p design featuring the Royal Shield of Arms, which was released two years ago, is currently the second rarest 50p coin in circulation behind the 2009 Kew Gardens.

Designs that are produced annually are sometimes overlooked in rankings of rare coins, in favour of ‘commemorative’ pieces – yet less than two million of the Royal Shield of Arms were minted in the year 2017.

Which? reveals the  rarest 50p coins and how mintage influences the value of a coin.

What is the rarest 50p coin?

But if you include definitive coins – meaning those produced annually – then the second rarest 50p design is the 2017 Royal Shield of Arms.

This coin was originally designed by Matthew Dent following a public competition.

The third rarest coin in circulation remains the Sir Isaac Newton 50p, which has a release of just 1.8m.

The chart below shows the current rarest 50p designs based on mintage figures from the Royal Mint.

The Royal Mint issues ‘definitive’ coins every year based on demand. The same design is produced annually, with just the year changing.

These types of coins are sometimes ignored by collectors but in cases such as the Royal Shield of Arms 2017, they can also be extremely rare.

By contrast, commemorative coins are released to mark a particular occasions, person or event, so tend to be a one-off design.

Often, these coins are first released as collector’s editions by the Royal Mint, with some versions then entering general circulation.

Special 50p have been released this year celebrating the anniversary of The Gruffalo, the famous kids’ book Peter Rabbit and the deceased British professor Stephen Hawking.

How does mintage affect a coins value?

Mintage figures can have a massive impact on the coin’s value in the market.

Generally, the harder the coin is for collectors to find, the more they are likely to pay for the coin. This can partly be determined by mintage, but also the popularity of the design.

As the 2012 Olympic coins drop out of circulation by getting lost or snatched up in collections, their value has been increasing, with the football and wrestling designs particularly popular.

Which? has looked at the average price on three recent sales on eBay for particularly rare 50p coins – the Kew Gardens 2009, the Royal Shield of Arms 2017 and the Olympic 2012 wrestling design – and the results are below: 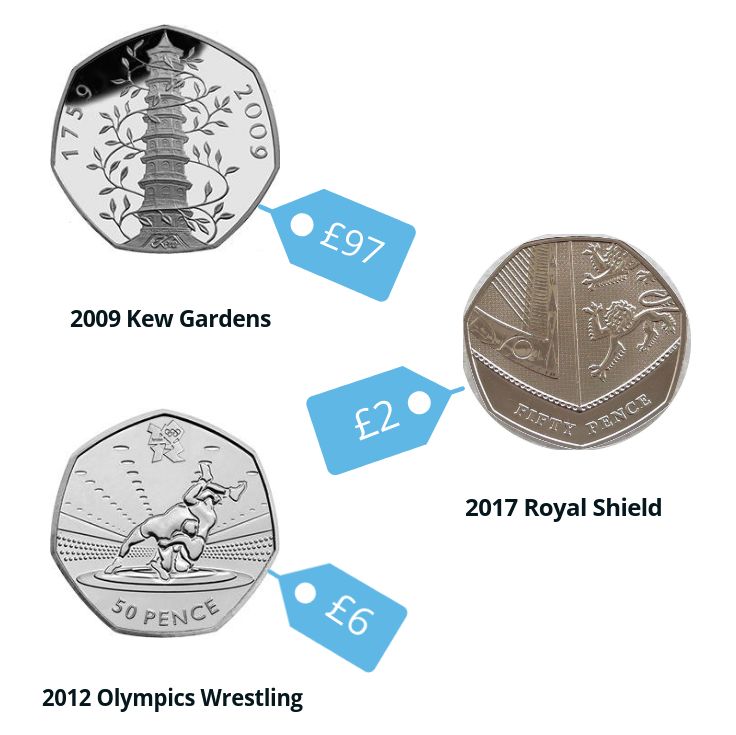 You can see that despite the rarity of the Royal Shield of Arms coin, it doesn’t fetch a huge premium – perhaps because the design doesn’t resonate with the public in the same way.

That said, collectors are advised to treat eBay listings with caution.

Some sellers will list coins at an inflated price, or bid on their own product to make it look there’s a bigger demand.

Remember that coins are only worth whatever a buyer is willing to pay for them – even if you’ve found a rare coin, you may not be able to sell it on for a profit.

What else affects the coin’s value?

The value of a coin can also depend on whether a particular design is sought-after or sentimental.

If the coin design is more popular, people are more likely to hang onto the coin and keep it from circulation.

Also the condition of a coin and whether it is from scratches or marks can have a significant impact on its value.

However an error on a coin can have the opposite effect and make them much rarer and more sought after than ‘perfect’ versions.

Last year Which? carried out a three-month investigation into the dark side of the coin investment craze – see our video below to find out which types of coins could be worth investing in, and scams to watch out for.