A 2018 commemorative coin could be set to become the rarest 50p in the UK, after The Royal Mint made it available in an extremely limited release.

The Royal Mint has released the 2018 version of the commemorative Sir Isaac Newton 50p coin – but there’s no point checking through your loose change to see if you have one. The coin hasn’t been released into circulation – nor will it ever be.

Find out how it compares with other commemorative coins, and how you can get one for your collection.

How can you find the Isaac Newton 2018 coin?

To get your hands on one of these coins, you’ll need to visit The Royal Mint Experience in Llantrisant, Wales and strike it yourself.

Entry to the exhibit will cost you £13.50 (if bought on the door), plus an additional £5 to strike your own coin.

This will only be for a short period of time, and is subject to availability.

Due to this limited release, some coin collectors believe the 2018 Sir Isaac Newton coin is set to be the rarest 50p ever released – meaning its value could skyrocket.

Several Ebay sellers currently have the coin listed for more than £100.

What’s the significance of the Sir Isaac Newton coin?

Aside from his contributions to science, Sir Isaac Newton is an important figure in the history of The Royal Mint. In 1699 he became Master of the Mint, and revolutionised the coin-making system to root out counterfeiters.

Just 1,800,000 of these coins were released across the country, with a large proportion circulated near Newton’s birthplace, Woolsthorpe Manor.

Visually, the 2017 coin looks the same as the 2018 coin – only the year has changed. The design is based on elements of Proposition 11 in Newton’s ‘Principia Mathematica’. 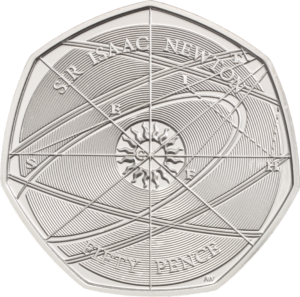 How does it compare with the other most valuable 50p coins?

The short answer is that we don’t yet fully know. Because the coin won’t be put into circulation and the mintage hasn’t been set, it’s not yet known how many of the 2018 coins will be made.

Change Checker estimates that this new coin is likely to be even more scarce than the 2009 Kew Gardens 50p, currently considered the rarest 50p.

The Kew Gardens commemorative coin has a mintage of just 210,000 and regularly sells for around £82.

The table below shows the rarest 50p coins (excluding the Olympic 50p range) – the 2017 Sir Isaac Newton coin is currently in second place.

Other rare coins on the market

The rarest £2 is currently the 2002 Commonwealth Games Northern Ireland coin, with a mintage of just 485,000. Change Checker’s Ebay tracker tool prices this at £30.

Mintage figures for the 2017 Jane Austen and 2017 First World War Aviation £2 coins are still yet to be released. If the numbers are low, the value of these coins could dramatically increase.

The 2011 Edinburgh £1 coin is also sought-after, with a mintage of just 935,000. This design can fetch around £30 in uncirculated condition.

Mistakes can also pay-off if you spot them in your change. A number of 20p ‘mule’ coins from November 2008 were incorrectly minted without a date. These can sell for around £53 each.

How to check if a coin is genuine

After carrying out a three-month investigation, Which? found there is a dark side to the coin investment craze.

See our video below to find out which types of coins could be worth investing in, and scams to watch out for.

Remember that a coin is worth whatever a buyer is prepared to pay for it; just because a rare coin is selling on Ebay for a certain amount of money, doesn’t mean it’s necessarily worth that amount in real terms, or that you’ll be able to sell it on for a profit.