Six new 50p designs based on JM Barrie’s Peter Pan are available to buy from today to raise money for the Great Ormond Street Hospital Charity – and will be released into circulation in a limited way.

The collection has been created in partnership with the children’s charity, with money being donated from each sale.

The coins will also enter circulation, but only on the Isle of Man. Indeed, while the coins may look exactly like pound sterling, the currency is actually Manx pounds.

Here, we look at whether you’re likely to find this rare coin in your change, and which other Isle of Man coins could be worth collecting.

The coins have been created to celebrate 90 years since author JM Barrie gifted the rights to his Peter Pan stories to Great Ormond Street Hospital in 1929.

Each will be available to buy from The Westminster Collection in three different metals: gold, silver and base metal. The silver proof coins all have full-colour illustrations, while other metals have the same designs in monochrome.

Click through the gallery to see the coin designs for yourself.

All six designs will enter circulation, but there’s a caveat. These 50p coins will only circulate on the Isle of Man.

Tower Mint in Camberwell, London, will produce the coins, having been selected to strike official coinage for the Isle of Man Treasury in 2017. By contrast, official currency for the UK is struck at the Royal Mint in Llantrisant, Wales.

So will you end up finding a Peter Pan 50p if you don’t live on the Isle of Man? It’s unlikely.

While pound sterling is valid on the Isle of Man, it doesn’t work both ways. Tower Mint’s Isle of Man coinage – known as the Manx pound – is not legal tender in the UK.

It’s worth exactly the same amount as pound sterling, and has the same denominations (1p, 2p, 5p, etc).

That doesn’t mean Isle of Man coins don’t occasionally end up on the mainland – with the same shape and size, these coins sometimes enter the UK currency mix, although no retailer is likely to accept them.

For coin enthusiasts, Manx currency has a seemingly endless number of commemorative coins, celebrating everything from the personal computer to several royal weddings.

How much are the Peter Pan 50p coins worth?

Any collectible coin is only worth as much as someone will pay for it.

Less than an hour after the designs were revealed, The Westminster Collection website appeared to have a queue of almost 3,000 people attempting to view the coins. 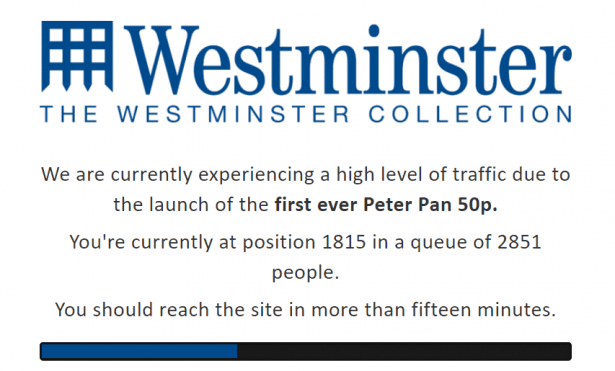 Since the Peter Pan coins will enter circulation at the end of this month – and base metal versions are available for £6.25 – a collector is unlikely to pay very much for a circulation-quality coin.

There are, however, some Isle of Man coins that do sell well on eBay.

Other Manx Christmas coins appear to be worth a lot to collectors. A 2003 Snowman coin, for example, recently ignited an eBay bidding war, eventually selling for £214.

This coin had a mintage of just 10,000, according to Change Checker. To put that in perspective, the infamously scarce 2009 Kew Gardens 50p from the UK had a mintage of 210,000. And the recent Sir Isaac Newton commemorative 50p had almost two million.

Tower Mint is yet to confirm mintage figures for each of the six Peter Pan coins. But given the Isle of Man has a population of just over 84,000, we can expect them to be on the smaller end of the scale.

It’s important to be careful when buying coins on the internet. For more details of what to look out for, read our investigation into the dark side of the coin investment craze.