Tesco has increased the prices of more than a thousand of its products in the past two weeks, according to an internal document shown to the Press Association. The groceries affected include plenty of household staples, such as bananas, cheese and pasta.

Tesco shoppers hoping to bag a bargain may have faced an unwelcome surprise at the tills this week. In the first two weeks of July, the supermarket put the prices of more than a thousand products up by 11% on average.

Find out which supermarkets are rated highest by shoppers: the best and worst supermarkets

Of the 50 biggest price rises, 18 were on Tesco’s own-brand products. This includes a five pack of bananas, which has seen an 11% price increase, from 90p to £1. 500g packets of Tesco-branded farfalle, macaroni and linguine pasta have all risen by 30%, from 50p to 65p. 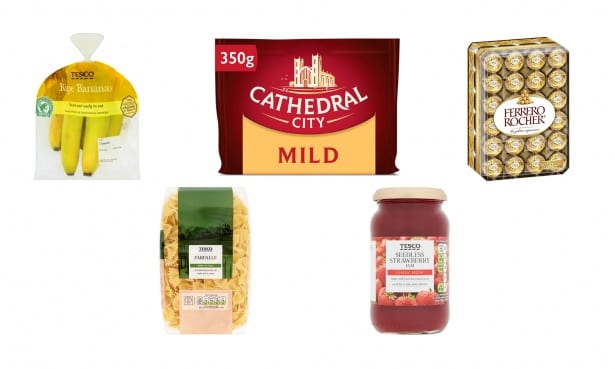 The data, seen by the Press Association, comes from Brand View, a pricing monitor used by the supermarket industry.

Sources told the Press Association that, while prices do fluctuate across the whole supermarket industry, ‘the size and scale of Tesco’s recent rises are notably high’. While prices on branded products move more frequently due to promotions, own-brand food and drink prices tend to be more stable.

Which is the cheapest supermarket?

In 2018, Tesco dipped a toe into the discounter pool with the launch of its own budget brand, Jack’s, and competing with the low-cost Aldi and Lidl is a continuing priority.

But pushing for lower prices comes at a cost. Speaking to the Press Association, a spokesperson for Tesco blamed this month’s increases on cost pressures that are hitting the entire market. ‘We’ve focused on protecting our customers for as long as possible. But, like the wider market, we have had to reflect these pressures in the price of some products,’ they said.

They claimed that ‘for the majority of products that have increased in price over the last three weeks, Tesco still beats or matches the cheapest of the Big Four [Tesco, Sainsbury’s, Asda and Morrisons].’

However, in our own monthly research into the average cost of a typical basket of branded items at six of the UK’s biggest supermarkets, Asda came out as the cheapest for the month of June.

In fact, shopping at Asda rather than Tesco for sirloin steak today would save you £16 per kilo.

In our June cheapest basket analysis, Tesco was beaten by Asda, Morrisons and Sainsbury’s, but it was cheaper than premium brands Ocado (£153.14) and Waitrose (£158.06).

What do UK shoppers think?

Despite being the UK’s biggest supermarket chain, Tesco is rated seventh out of nine in our latest survey of supermarket shoppers.

Scoring 59% in our in-store supermarket shopping survey, customers marked it down for quality and value for money.

Top-rated Waitrose also struggles to compete on price with the likes of Aldi, Lidl and Iceland. But the quality of its stores, quality of products and helpful staff keep it at the top of our table.

With price rises, and customers finding a better experience elsewhere, it’s no wonder that Tesco isn’t as highly rated as its competitors.

Read more about the best and worst supermarkets in our guide to supermarket shopping.