In May 2018, Raffle House launched a competition that promised to give one lucky winner a free home in London, even offering to cover stamp duty and legal fees.

It promised this again in June 2018, when it extended the competition by five months, and yet again in November 2018, when the closing date was pushed back another seven months.

So it will come as no surprise that, when the competition finally closed on 30 June 2019, the outcome was eagerly anticipated: would this house raffle actually give away a property?

The answer, unfortunately, was no. Just like the dozens of other UK property raffles that came before – except one back in 2017 – the competition failed to sell enough tickets.

While not a bad return on the £5 entry fee, the prize accounted for less than half of the ticket revenue generated. And a closer look at Raffle House’s terms and conditions reveals some other rules that may surprise those who entered.

With Raffle House having already launched a new competition to win a different property in Whitechapel, Which? investigates how the company operates and calls for greater regulation of property prize draws.

How the Raffle House prize was worked out

When Raffle House offered people the chance to win a flat in London’s pricey Brixton in May last year, the prospect proved tempting. In fact, over the course of 13 months, the company managed to sell an impressive 80,925 tickets.

But this fell short of the 120,000 tickets required to give away the property, meaning a cash prize was awarded instead (and three runners-up also received £1,000 each).

The Raffle House terms state that, in the eventuality that a cash prize is given, Raffle House keeps 50% of ticket sales revenue – in this case, a tidy £202,313.

If entrants don’t recall reading this, it may be because it’s buried within 3,833 words of terms and conditions.

The winner’s prize pot was reduced further after Raffle House deducted £15,344 for ‘payment processor and acquiring bank fees’ as well as the competition’s £13,955 charitable donation.

This cut the prize down to £173,013, significantly less than the £202,313 pocketed by Raffle House. And Raffle House also retained the property, reportedly valued at £650,000, that had been offered as a prize.

Benno Spencer, founder and CEO of Raffle House, said: ‘All players that open an account with Raffle House must read and accept our T&Cs before making a transaction with us. We also state very clearly on the homepage that the ticket threshold must be met in order to award the prize.’

Mr Spencer told Which? that the company had not made a profit and the founders weren’t paid a salary.

He said: ‘In undertaking the draw, we have incurred significant expenses when it comes to payment processing and banking fees, marketing and advertising and other business costs.

‘At the end of the day, we are a business and just like other draw and lottery operators we need to retain a percentage of the ticket sales in order to operate while we build a customer base and lack the huge news of a property being awarded.’

The terms of the next competition, which Raffle House has already launched, state that the company will take just 25% of the revenue. It’s unclear whether processing fees and charitable donations will again be deducted from the winner’s share.

Prepare for a tax bill

While winning a house for £5 sounds like a bargain, you may wonder who shoulders the tax bill.

As with the last competition, Raffle House reassures entrants of its new prize draw that ‘no winner will pay a penny in tax’. 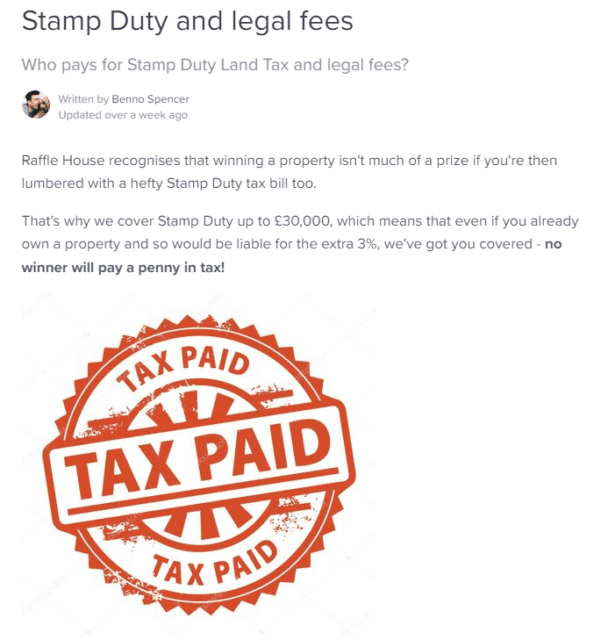 But that’s not necessarily true. In fact, the terms and conditions class the payment of stamp duty, council tax, ground rent and solicitors’ fees as a ‘Discretionary Prize Bonus’.

This sum is awarded ‘at the sole discretion of the Promoter’ and only if the minimum number of entries has been received.

So, if Raffle House doesn’t sell enough tickets for its new raffle, it could choose to award the £500,000 Whitechapel property as a prize but leave the winner liable for stamp duty plus all the other costs involved in taking over and living in the property.

In this scenario, if the winner had never owned a property before they’d have to pay £10,000 in stamp duty.

If the winner had owned property before but didn’t currently own another home, or they sold their current property and moved into this one, they’d pay £15,000; and if they wanted to hang onto their current home and use the prize property as a second home or buy-to-let the tax bill would be a hefty £30,000.

However, the winner would be able to choose whether or not they wanted to pay stamp duty in this instance. If not, they could opt to take a cash prize instead.

Is Raffle House adhering to the rules?

All marketing material published in the UK is regulated by the Advertising Standards Association (ASA). This body enforces the UK Code of Non-broadcast Advertising, Sales Promotion and Direct Marketing, also known as the CAP Code.

In recent years, the ASA has issued guidance on its website specifically for ‘win a house’ promotions. One of the requirements is that ‘prizes must be awarded as described in the ad, or a reasonable equivalent’.

The ASA was not able to comment on whether the Raffle House prize represents a reasonable equivalent. However, it did express concern at these types of competitions in general.

A spokesperson told Which?: ‘As our guidance makes clear, there are common problems with these kinds of promotions and the example you’ve highlighted appears to raise some of these issues.’

When a past competition called Homeraffler.com awarded its winner the value of the tickets sold minus 15% in ‘administration fees’, the ASA concluded the substitute cash prize was not a reasonable equivalent to the ‘luxurious London home’ that had been advertised, and ruled that the promotion breached the Code.

ASA guidance also requires that ‘closing dates must not be changed unless unavoidable circumstances outside of the control of the advertiser make it necessary’.

The ASA previously found Raffle House to have breached the Code after failing to include a closing date in a Facebook ad and also extending the closing date.

Nevertheless, for the upcoming competition, Raffle House’s terms continue to state that it reserves the right to move the closing date at its own discretion:

Mr Spencer told Which?: ‘We have had and will continue to have an open and honest dialogue with the watchdog around how we advertise and promote Raffle House to ensure we adhere to best practice.’

Does the Gambling Commission have any authority?

When a competition requires entrants to answer a question, or show some kind of skill or judgment, it is classed as a ‘prize competition’.

The UKGC does not regulate these kinds of competitions, other than to check that they’re not operating as illegal lotteries.

As Raffle House asks entrants a question about city populations, the UKGC has no authority over its property raffles.

Which? calls for greater regulation

Gareth Shaw, head of money at Which?, said: ‘Housing raffles promise the chance to win a home for just a few pounds, but the reality can be quite different, with very few properties ever ending up in the hands of an entrant.

‘We found the winner of the latest failed housing raffle received a cash prize of less than half the revenue generated by ticket sales. We also discovered surprising terms in the small print that contradicted promises made in the ads – potentially leaving winners with a hefty stamp duty bill.

‘We would like to see stronger regulation and enforcement around these activities as there is currently a risk that unscrupulous operators will look to exploit a lack of oversight to make money for themselves, while leaving consumers short-changed.’

What will happen to the Brixton Raffle House flat?

The Brixton flat offered as a prize in Raffle House’s last competition is owned by Benno Spencer, CEO and founder of Raffle House.

Asked whether the property would now be sold, Mr Spencer told us it would not. He said: ‘Starting a new business from zero is tough, especially one in a new and challenging sector such as house raffles. So I had to put my own bricks and mortar on the line in order to get Raffle House out of the starting blocks.’

His other business ventures, a dissolved real estate management company called Snake Eyes Ltd and a still-trading dating app called Type, are registered to the street address of the Brixton prize flat.

Mr Spencer also owns the Whitechapel flat listed as the prize in the current competition in his own name.

Should I enter a property raffle?

Raffle House launched its new competition before announcing the outcome of the Brixton raffle.

In order to give away the Whitechapel property now being advertised, Raffle House says it needs to sell 60,000 tickets, with a raised price of £10.

Before taking a punt on a ‘win a house’ competition, there are a few things you should bear in mind:

If you’re keen to buy a place of your own, you may be better off checking out our guide on saving for a mortgage deposit.