Ketopurediet.com has been using heavy Facebook advertisements and fake celebrity endorsement ads to flog its diet pills, intentionally overcharging customers and refusing to refund them, according to new Which? findings.

One customer told Which? that two additional payments were taken from his credit card – for £1.50 and £156.88 – despite only authorising a single payment of £47.19 for six bottles of keto pills, advertised as a ‘limited offer’.

Ketopurediet.com was initially responsive via email, telling him that he could arrange for a refund once he received the parcels. But, when they arrived, he had to pay customs charges totalling £43.07. The site has since stopped replying to his emails and has not refunded the money.

He told us: ‘While at the Post Office, I was told that it has had many of these parcels sent with a customs charge to pay – many of which have not been collected. It seems like I’m not the only one to has been disappointed with their purchase.’

A string of almost identical complaints can be found on review sites Sitejabber and TrustPilot.

Ketopurediet.com is yet to respond to our attempts at contact via email and the US telephone number supplied on its website is no longer valid. 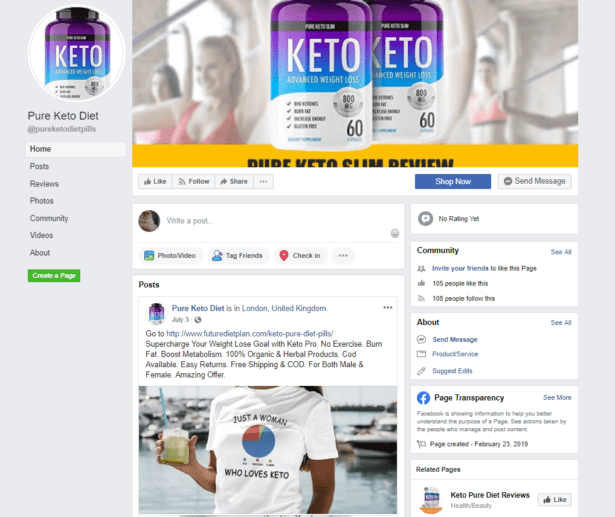 Ketopurediet.com advertised via Facebook and posted ads that were seemingly backed by celebrity Anne Hegerty from ITV game show The Chase.

Her booking agent, Sue Hahn, confirmed to use that this is not a genuine endorsement, and her image and brand were used without consent.

A little digging uncovered various similarly named Facebook profiles that all linked to Ketopurediet.com in posts:

After Which? informed Facebook of our concerns, it removed 12 pages, disabled six profiles and removed one Ad Account for violating its policies on fraud. Facebook has also taken action in relation to four external websites to ensure any posts linking to them are automatically removed.

A Facebook spokesperson said: ‘We don’t tolerate fraud on Facebook and we have removed all of the pages in question along with others we had found to be breaking our policies.

‘We work hard to keep up with fraudsters’ increasingly sophisticated techniques. In the UK, we’ve donated £3m to Citizens Advice to help consumers avoid scams and we have created a dedicated ads reporting tool so people can directly report scams as soon as they see them.’

How to spot a fake or scam ad on social media

Which? has previously shown how simple it is to post a fake advert on social media, so it pays to be vigilant and skeptical of any goods advertised on sites such as Facebook, Instagram and Twitter.

If you’re interested in a website that you’ve discovered via social media, think carefully about the offer – is it too good to be true? You can also use a site such as whois.com to find out who owns the domain (although, this may be hidden) and when it was registered. You should always treat relatively new sites (registered within the past year or so) with caution.

Don’t assume a green padlock means a site is safe either.

While you should never enter sensitive data online without checking for a padlock and https in the address bar, this doesn’t mean you can trust the site itself.

All that a padlock tells you is that the connection between you and that website is encrypted. Fraudulent websites can and do still use them, as we explain in this news story.

Read our guide to spotting a social media scam and watch our video below to stay safe when shopping online.