Some 25 years after the original George Foreman Grill first started the craze for low-fat grilling, rival models from Tefal and Ninja are aiming for a comeback.

The latest grills are packed with fancy features to tempt you, but they’re also much more expensive. A basic George Foreman grill costs anything from £21 up to £100 for a 10-portion ‘entertaining’ grill, whereas rivals such as the Ninja Health Grill and Air Fryer (£149), and Tefal Optigrill Elite (£170), don’t come cheap.

They do, however, aim to do more, with automatic sensors to take the guesswork out of cooking and extra accessories for jobs such as air frying and baking.

Tefal’s Optigrill Elite claims to cook perfectly grilled food at the touch of a button, thanks to cooking sensors, while Ninja’s smokeless indoor grill promises authentic char-grilled results with no smoke or mess and, most importantly, using little to no oil. It can also air fry, roast, bake and dehydrate food.

So is it worth investing in a high-end health grill, and which one is right for you? We tried out both to bring you our first impressions.

Kitting out a new kitchen? Check out our kitchen gadget reviews 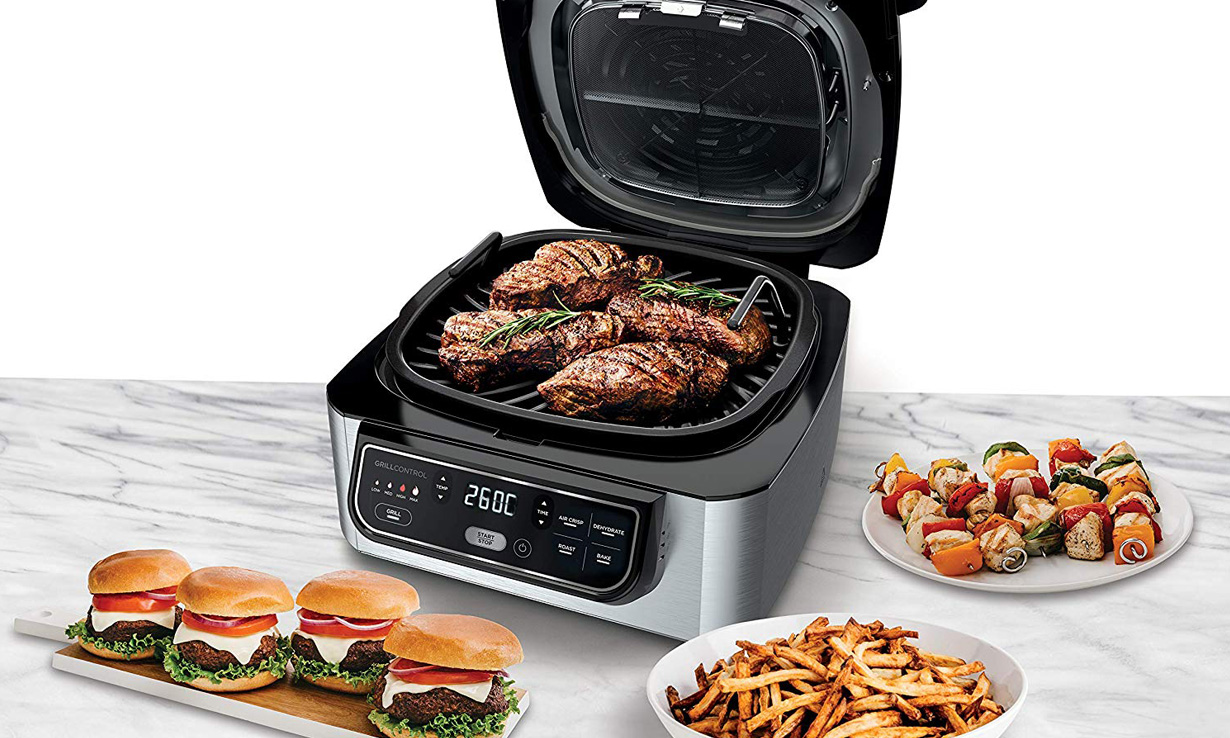 Steak, toasties, grilled ciabatta, meatballs, halloumi and vegetables. These are just some of the things we cooked using the two grills. With the Ninja we went even further by baking pizza and brownies, frying chips and dehydrating fruit.

As well as trying out lots of different foods, we considered how easy to use and clean each grill was. Overall, we liked the Ninja’s versatility. It would suit anyone who is thinking of buying an air fryer but wants more for their money.

The Optigrill, however, is a safer bet if what you want is a good steak done just as you like it, and you’re a fan of a nicely toasted panini.

Tefal vs Ninja: how they compare on features and accessories

The main difference between these two gadgets is that one is all about precision cooking and the other is more focused on versatility.

The Tefal is geared towards achieving grilled perfection and is the most similar to a George Foreman-style grill. It doesn’t take up much space, so you could easily leave it on the worktop or store it in a cupboard when not in use.

The grilling plates are angled so excess fat or oil can drain away into the drip tray. This also helps to prevent smoke from food debris burning.

The Ninja is bigger and heavier, so you’ll need enough worktop space to leave it out all the time. The lid is designed so that it falls back when lifted, so it fits nicely under the cupboards.  It comes with a 5.7-litre cooking pot, a 3.8-litre crisper basket for air frying and dehydrating food, and a grill plate.

Both models come with recipe books, which include plenty of options for vegetarian and vegan diets. And both instruction manuals also offer guidance on cooking different cuts of meats as well as veg.

You can adjust the temperature and time manually on both, though the Ninja offers a wider range.

Here’s how the key specs stack up:

The Ninja Health Grill is pretty unique in the world of small kitchen appliances, whereas the Tefal Optigrill is more similar to a top-end George Foreman grill.

Some pricier George Foreman models, like the Evolve Precision Grill (£100), come with a display, a timer and a temperature probe. Like the Tefal Optigrill, this monitors the temperature of your steak and tells you when it’s reached your preferred cooking level. You can also set the grilling plates to angled (so fat runs off) or flat (for things such as cheese toasties).

Ninja Foodi – we’ve also tried out the Foodi multi cooker, pressure cooker and air fryer. Get our verdict on this multi-tasking gadget.

We cooked sirloin steaks, sausages, meatballs and chicken thighs in both grills.

With the Optigrill, pre-heating took about 10 minutes, and our medium-rare steak was ready in 4-5 minutes. Monitoring progress was easy with the countdown, and the screen takes you through the journey from blue to rare, medium and well done.

The steak was tender and juicy, with appealing grill stripes. Some of the fat and juice fell in the drip tray, so there was virtually no smoke in the kitchen. But, as the grill squashes the meat down, it didn’t feel as tender as the steak cooked in the Ninja.

Sausages were good, too, but chicken legs and meatballs got a bit squashed.

The Ninja Health Grill was a little slower – it took 12 minutes to cook steak to medium-rare, plus about 10 minutes for pre-heating. It had a pleasant char-grilled look. Ninja say you don’t need to flip the steak, but we did mid-way through cooking to ensure it had grill markings on both sides. Overall, we preferred it as it felt more tender than the Optigrill version.

Chicken legs were nice and crispy, but sausages and meatballs came out a little dry.

Also, if you cook a batch of chips before, like we did, you’ll have to be careful when placing the grill inside the cooking basket as it will still be very hot.

Are the grills good for veggies too? 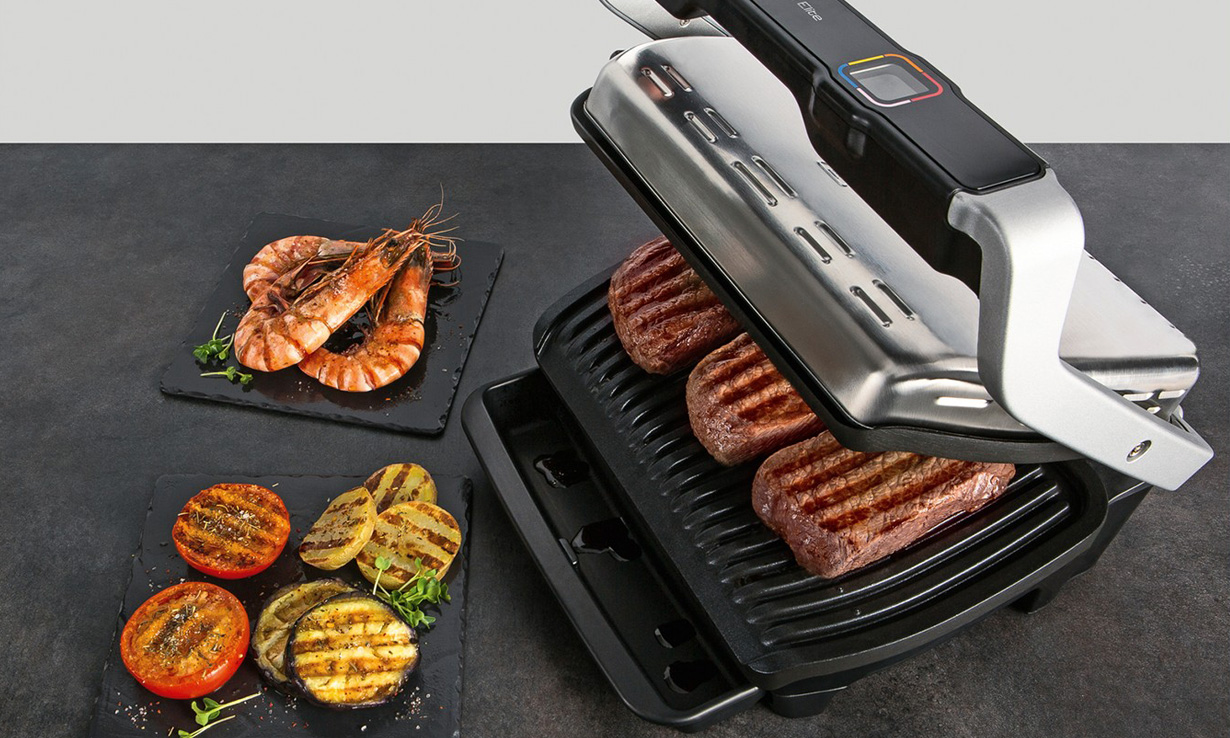 These days, health grill manufacturers are keen to show they can handle more than just meat.

We tried cooking a range of veg including courgettes, peppers and aubergines, as well as halloumi, to see if dreamy charred vegetables were within reach.

The Tefal Optigrill has dedicated settings for grilling potatoes, aubergines, peppers and tomatoes. You can also experiment with manual settings.

Grilling halloumi and vegetables was quick, easy and a lot more convenient than using a grill pan on the hob. The timer was accurate and everything from leeks to courgettes and aubergines came out nice and juicy with appetizing-looking grill stripes.

Lighter vegetables, such as courgettes, can slip down the grill before you have the time to press down the upper grill, so you need to position them carefully.

Vegetables and halloumi came out perfectly cooked; however, they didn’t have the same kind of pleasing grill stripes we achieved with the Optigrill. Whole peppers, in particular, came out well done and were quick to cook compared with using an oven.

Toasties, brownies and dried fruit: what else can the grills do?

Both grills can also be used to make toasties. So, in the name of science, we made some cheese toasties to check how good the results were.

This was possibly the most satisfying thing we made on the Optigrill; the paninis were perfectly toasted and looked very appealing.

We tried all sorts of bread, including sliced bread, ciabatta and baguettes. It was a bit trickier to keep these in place before pressing down, but they turned out great.

The toasties we made in the Ninja were OK, the cheese melted and the bread was crispy, but as there isn’t a top grill plate that presses down on the food, the end result wasn’t quite as appealing.

Sourdough pizza, on the other hand, was a revelation. It was slightly quicker than the oven, and the base was nice and crispy. We also made great chips using the air-frying mode, good brownies with the baking setting, and tasty dried banana and apple using the dehydrator setting.

Bear in mind, when dehydrating food you can only do quite small quantities at a time, and it takes eight hours – during which the noise of the cooking fan could be annoying.

The grill plates for both grills are removable and dishwasher-safe, and we found them easy to remove and clean with little scrubbing needed.

With the Tefal, any fat, oil or excess foods drains into the drip tray, preventing smoke. You can also wipe the plates with a kitchen towel in between cooking to remove any bits of cheese that get stuck.

You can’t do this with the Ninja, and any excess fat or oil falls in the cooking pot will continue cooking, causing a bit of smoke and smell that will inevitably escape the appliance as soon as you lift the lid. Cleaning is slightly more difficult, too, as the grill tray is heavy.

Which one is right for you?

We found the Tefal Optigrill convenient, easy to use and accurate at calculating cooking time, which is very helpful when cooking not just steak, but also sandwiches and vegetables.

However, some food does get a bit squashed – which might be preferable for a panini, but not for a steak. Plus sliced veg can slip out of the grill because of the angled plate.

We liked the versatility of the Ninja Health grill, as it can tackle a wider range of jobs. You won’t get such pleasing grill marks, or the nice squashed effect on your toasties, but our steak was tender, and you can cook up smaller portions of chips and other treats without having to power up your oven.

We’ve tested the Ninja Health Grill’s air frying abilities against dedicated air fryers. Check out our air fryer reviews to see how it compares to rivals.