If your collection of technology, appliances and gadgets is getting a bit unwieldy in the home, you may also have gathered a collection of extension leads and plugs to try and fit everything in.

Shifting appliances around from socket to socket can be tempting, but just because your extension lead can squeeze in four plugs doesn’t mean it’s safe to do – some appliances require so much power that when grouped together they can cause the plug to overheat, and possibly start a fire.

To help you stay safe, we’ve listed the most energy-guzzling appliances below to help you wire things up properly in the home. We also interviewed Group Manager Jeremy James, from Royal Berkshire Fire and Rescue, to find out more about avoiding potentially dangerous situations.

Good smoke detectors warn you early when there’s a real fire and give you time to escape – here’s the best smoke alarms.

How much power do your appliances really need?

Surprisingly, some of the smallest appliances in our homes use the most watts of power.

In fact, a kettle actually uses 20 times more watts than a fridge. And an iron uses a staggering 2,800 watts – that’s more than 200 times more than is needed to power a mobile phone charger.

As a guide, you should only load one plug socket with a maximum of 3,000 watts. But it might be easier to remember the sorts of products that require more and less around the home. 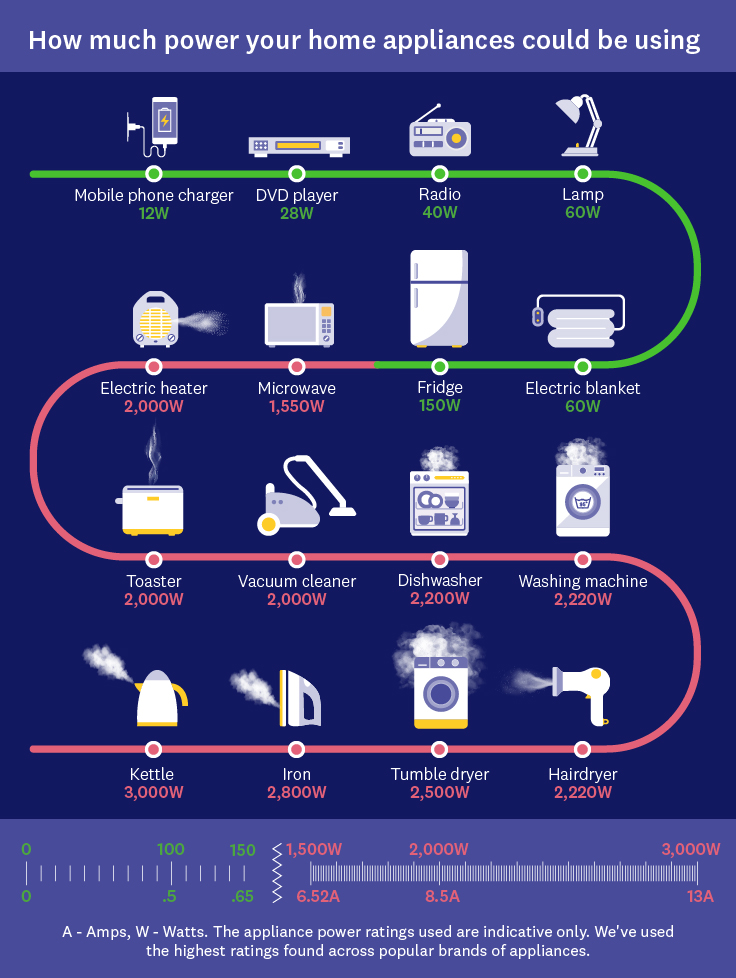 If you’re not sure which appliance works with which then take a look this handy socket calculator.

To find out more about safety around the home, we spoke to Jeremy James, Royal Berkshire Fire and Rescue Service’s Group Manager.

How many is too many when plugging devices into an outlet?

It really depends on the appliances you’re plugging in. Always work out the total wattage of all the devices going into the one socket. If they add up to more than 3,000W then it’s not safe – the plug in the socket can overheat and potentially cause a fire.

Here are four examples of what not to pair up using an extension lead. 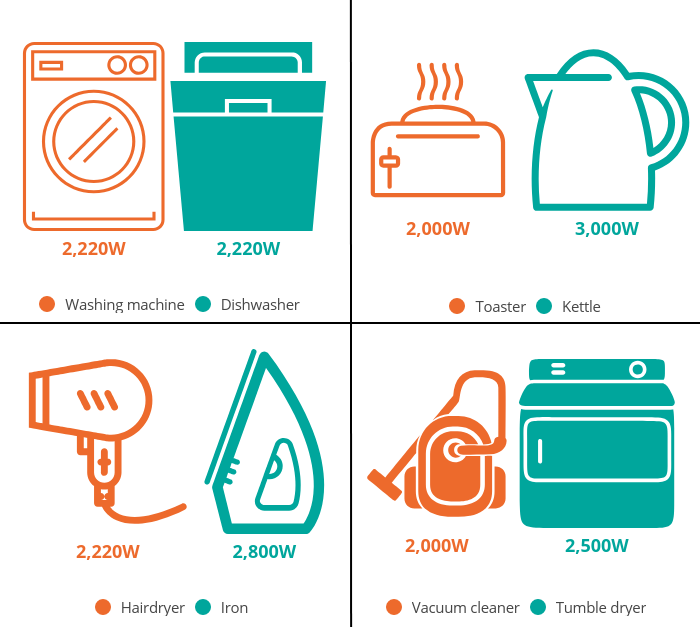 A kettle can max out the socket capacity all on its own, while having your washing machine and dishwasher plugged into an adaptor would mean you’re a massive 1,440 watts over the recommended amount.

Appliances like your fridge, radio or lamp are far more suited to sharing sockets. Take note if you’re moving plugs around to try to squeeze extra devices in.

Yes it is. You should never ‘daisy-chain’ extension leads together. If you use more than one extension lead per socket it will significantly raise the risk of overloading the socket.

Are block extensions better or worse than extension leads?

We prefer extension leads if used correctly. Block adaptors aren’t unsafe but the weight of the plugs and the leads can start to pull the adaptor out of the wall socket leading to resistance heating and increasing the risk of a fire.

Plastic block adaptors that have lots of sockets and sometimes come without a fuse are always best avoided. 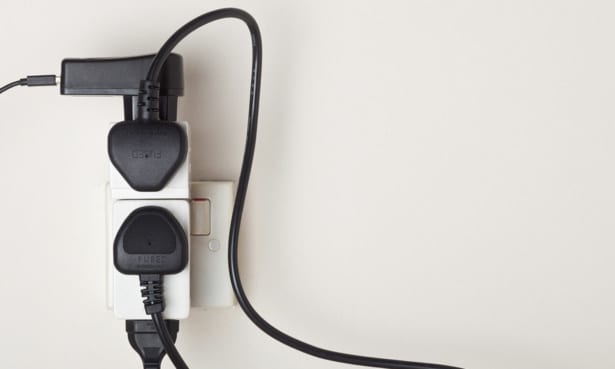 Are there risks to buying cheap extension leads from online marketplaces?

Yes, be wary of cheap extension leads – they are almost always cheap for a reason. It’s not worth the risk.

The best way to protect you and your family from potentially dangerous goods is to buy from a reputable retailer.

What are surge protectors for, and when should you use them?

A surge protector is an appliance or device designed to protect electrical devices from voltage spikes. A surge protector attempts to limit the voltage supplied to an electric device by either blocking or shorting to ground any unwanted voltages above a safe threshold.  Surges are typically produced from:

A surge protector can absorb only so many surges before it stops functioning. Although it’s practically impossible to tell exactly when this happens, the longer it’s been used for the more at risk you are. If it’s absorbed a serious power surge you should always replace it immediately.

Some surge protectors have built-in lights designed to alert you when it needs to be replaced. But you can’t fully rely on this – it’s not a foolproof system.

As a rule of thumb a surge protector should be replaced at least every two years.

Can I load the maximum amount into each plug of a twin-outlet socket on a wall?

While each socket usually in a twin-outlet plug is rated to 13 Amps and in theory should be able to handle that load, we wouldn’t advise doing this. If you suspect that one plug in a twin-outlet socket is heavily loaded, try to only use low-power devices in the other one, just to be on the safe side or use a different socket.

If in doubt, check the socket calculator before plugging in.

It’s easy to cut your winter energy bill. Use Which? Switch, our independent energy switching site, to find the cheapest energy deal.

We also interviewed Jeremy James about USB phone chargers in our investigation into dangerous toys, car seats and other items sold at online marketplaces.

You can keep up to date on our latest coverage over on our coronavirus advice hub.