Sony’s 1980s heyday made it a go-to electronics brand, renowned for products like Walkman and the first CD player. Now Apple and Samsung have surged ahead – but recent hits have once again got Sony products back into people’s homes. We take a look to see if it’s back on a roll.

Sony’s history is a remarkable one, with countless innovations. It invented the 3.5-inch floppy disk, memory sticks and co-developed Blu-ray, and the PlayStation games consoles have been going strong since 1994.

But Sony lost its magic around the millennium and it’s taken a while to get it back. It’s won praise in recent years for products like its flagship noise-cancelling headphones, the Sony WH-1000XM3, and its tiny Sony SRS-XB01 Bluetooth speaker has been sensationally popular.

Best headphones – our professional listening panel do the hard work for you.

We’ve gone back through the time tunnel to highlight some of Sony’s most memorable moments. 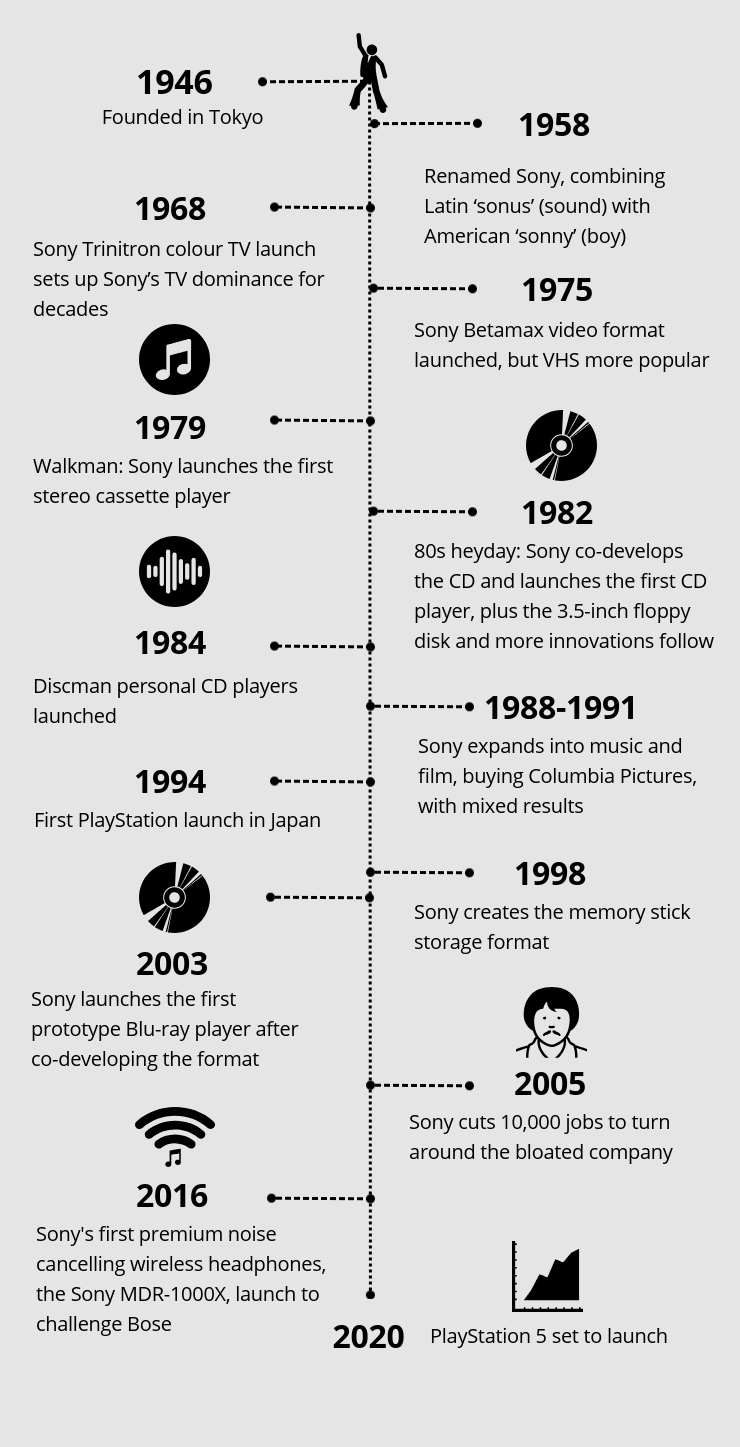 Time tunnel: Sony in Which? magazine

The first Which? magazine was published in 1957, 11 years after Sony was founded. We’ve reviewed countless Sony products over the years, and have gone back in our archives.

Sony’s prowess with stereo systems was well established by this point – did you own this one? 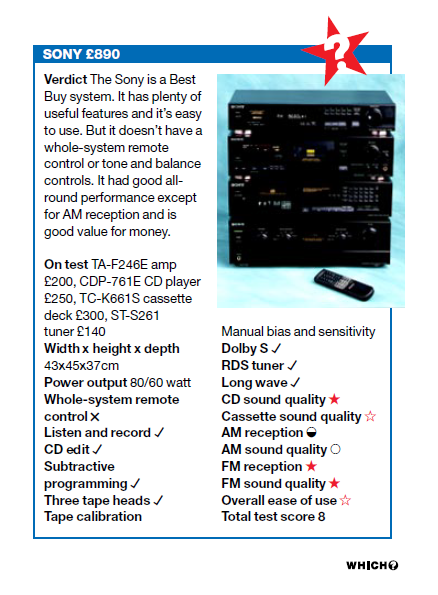 The Discman became a name synonymous with the personal CD player, and was still going strong after more than a decade. This model’s £160 price now looks staggering for such a product – even without considering inflation.

Despite hoping for its rival Betamax format to take off, Sony finally conceded defeat and started making its own VHS players, and videocassette recorders became very popular in the 80s and 90s. However, hardly any tech products we now review would come close to the sky-high £3,300 cost of this Sony model we reviewed back in 1997. 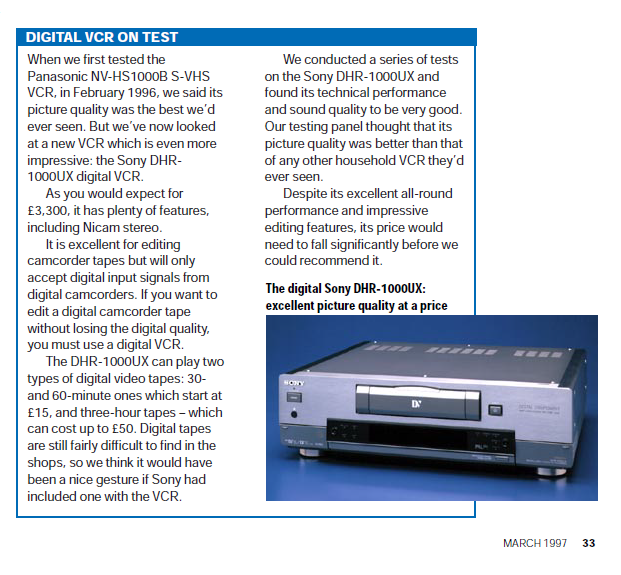 Sony has also made some rather quirky products over the years (let’s not forget the AIBO robotic dog), and this includes the Sony PS-F9, which can play vinyl records while hung on a wall. It was also known as the Sony Flamingo in Japan, as apparently someone thought it looked a bit like a flamingo. It’s now a highly sought-after collectors’ item. Audio-Technica produced a similar model called the Sound Burger. 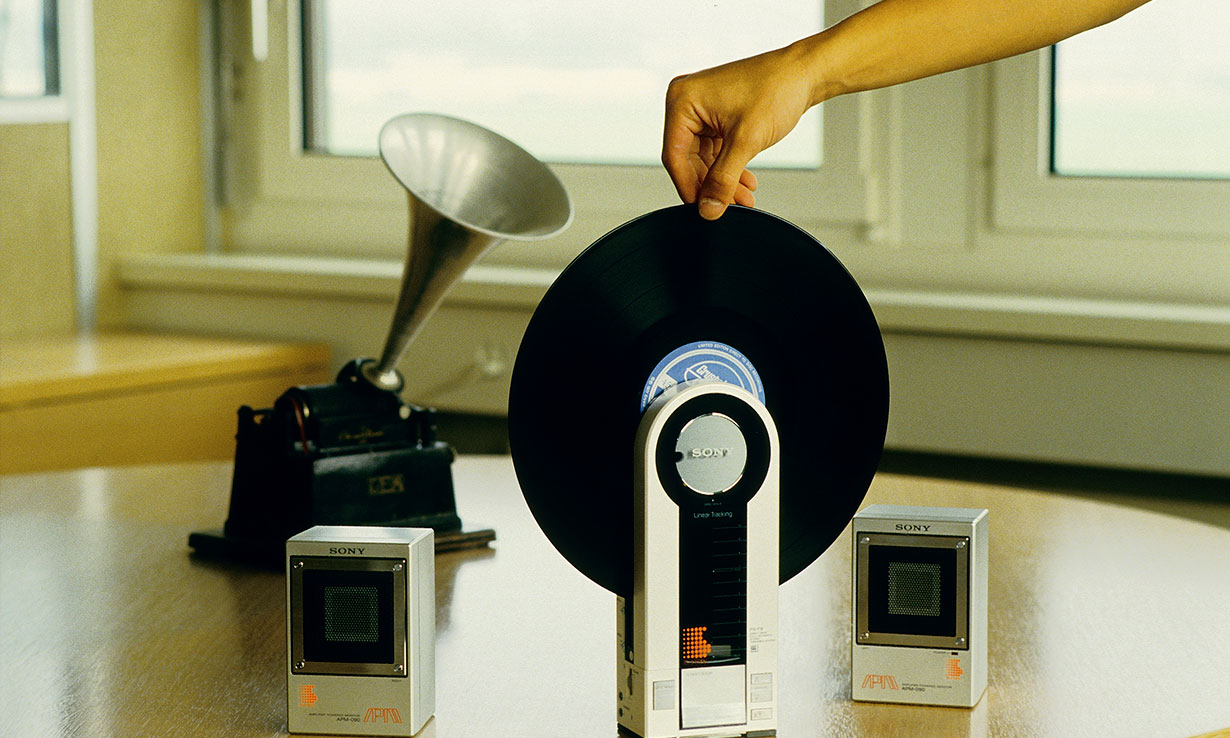 While no longer its golden age, Sony can still top our tests from time to time, and it’s recently had a string of successes, particularly with audio products like headphones and wireless speakers.

However our expert tests reveal buying Sony products can be a bit of a minefield, so it’s important to check our reviews to find the aces and avoid the duds. 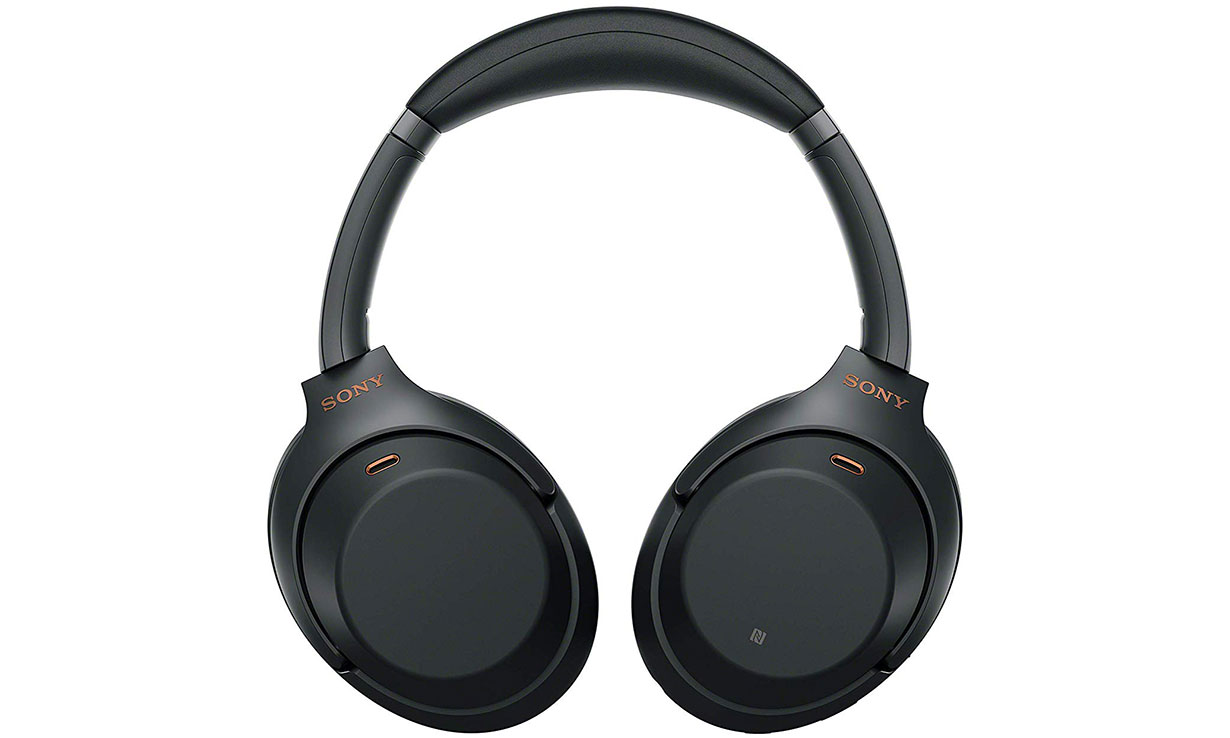 The WH-1000XM3 headphones are Sony’s flagship over-ear headphones, and Sony boldly claims they have ‘industry-leading noise cancelling’ to cut out unwanted background sounds.

They’ve proved a popular alternative to the rival Bose QuietComfort 35 II headphones – but how do they really compare? 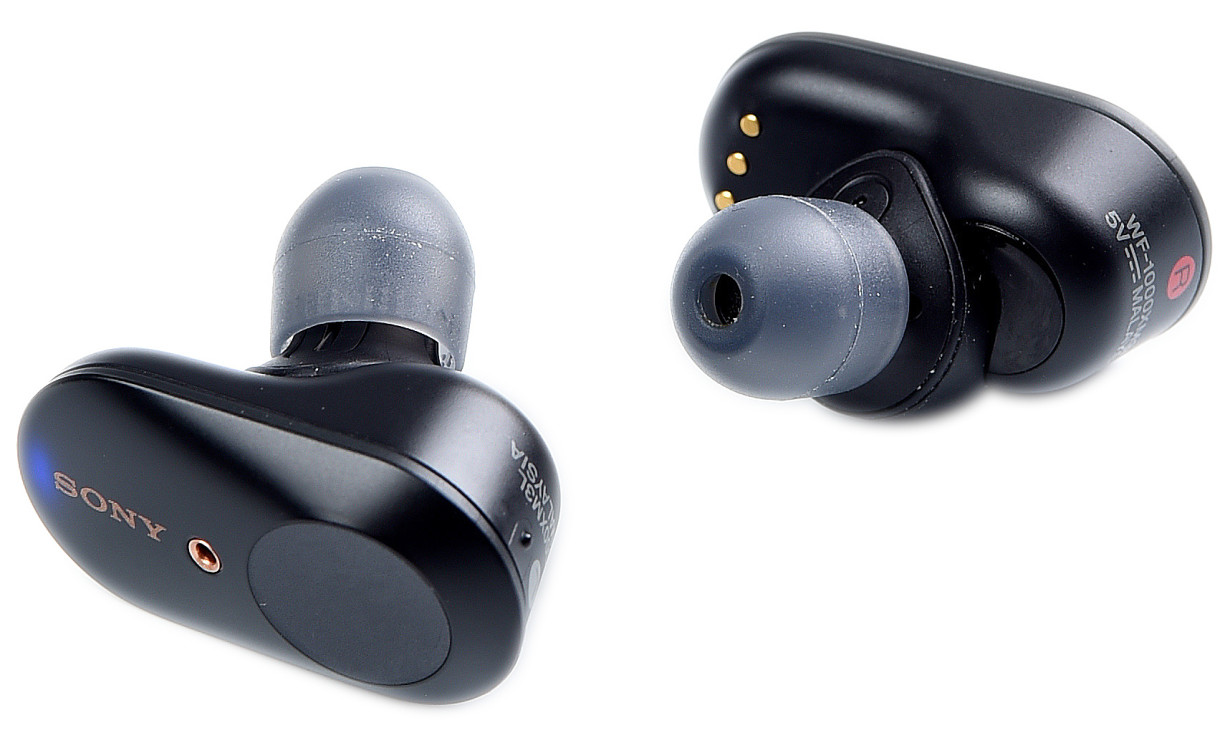 Sony has been a real innovator in headphones recently, and the Sony WF-1000XM3 noise cancelling truly wireless headphones even beat the rival Apple AirPods Pro to market.

Sony claims a longer battery life than the AirPods Pro, plus they support both Apple and Android devices. And Sony also boldly claims class-leading noise cancelling with this pair as well.

Do they really have what it takes? We put them to the test in our Sony WF-1000XM3 review. 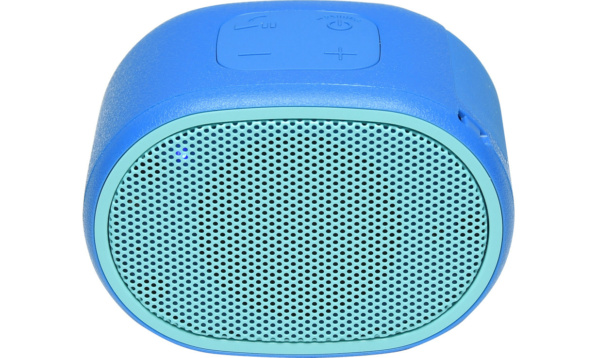 It’s incredible to think Sony can now offer a Bluetooth speaker for as little as £20, and it’s certainly been a top-seller and runaway success with consumers. But there are many cheap competitors, so is this model really one of the best, or is it selling because of the brand name?

We find out how good it really is in our full Sony SRS-XB01 review.

Sony’s Extra Bass line of products aim to produce more powerful bass, and it’s been a popular formula for it in recent years. The SRS-XB22 Bluetooth speaker gives you more power than is possible with the tiny Sony SRS-XB01 and you can even combine multiple speakers together for an even bigger sound.

Could this be the ideal speaker for you? See how it performs in our Sony SRS-XB22 review. 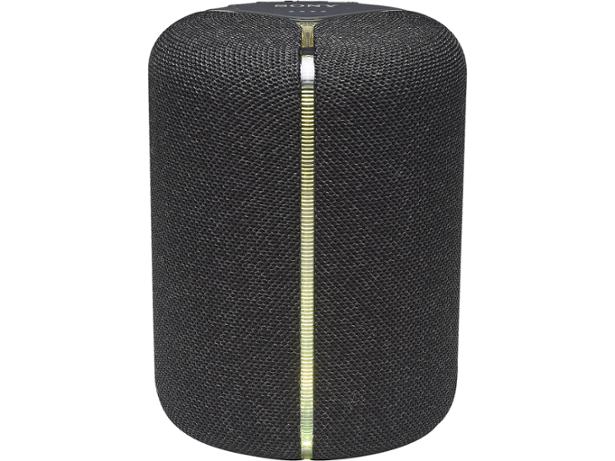 Alexa has become a veritable hit with consumers, and Sony’s got in on the action with this smart speaker in its Extra Bass range.

It’s waterproof, dustproof and shockproof, has Spotify Connect built-in and even has flashing lights and strobe effects to get the party started.

Is this speaker both fun and effective? Take a look at our rigorous Sony SRS-XB402M review. 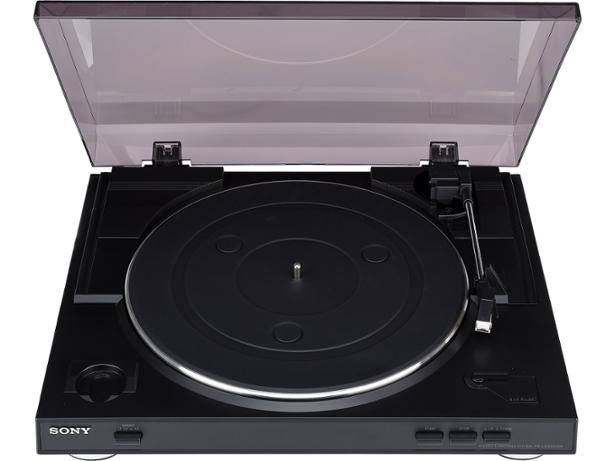 Around the 80s turntables tended to be premium-priced, but the Sony PS-LX300USB is a highly affordable option if you’d like to relive vinyl.

It’s an automatic player so easy to get to grips with, and even has a USB output so you can digitise your vinyls to your computer if they’re gathering dust.

Sony’s been making radios for years, and are still releasing new models alongside better-known radios brands like Roberts and Pure.

It doesn’t make that many though, so is it focussing on quality over quality?

All the answers are in our Sony XDR-S61D review.

Find all the latest Sony products and how they compare to rivals by heading over to our audio reviews.