Customers of easyJet who no longer wish to travel because of COVID-19 are furious after unwittingly giving up their legal right to a refund.

The airline is emailing flyers to ask if they would like to exchange their upcoming flight for credit. The voucher covers the full value of the fare, plus an extra £10 as a ‘thank you’. It’s valid against future bookings for 12 months.

Many flyers are snapping up the offer, only for their flight to be cancelled – sometimes as soon as the next day. Under EU rules, if the airline cancels, it must issue a full cash refund within seven days.

But by agreeing to a voucher, customers are stuck with flight credit and are no longer entitled to their money back. 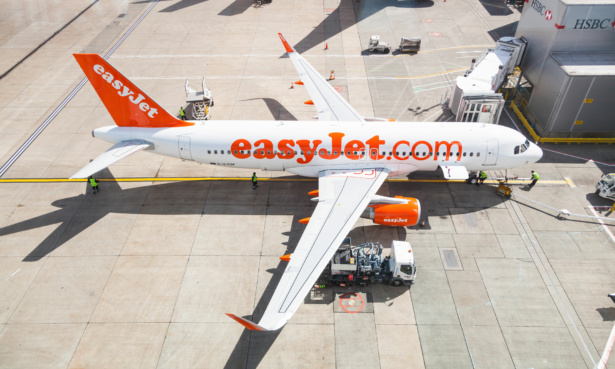 The email is sent to customers in advance of their upcoming flight. It says: ‘We really hope to be able to welcome you on board, but recognise that government travel restrictions and safety guidelines continue to evolve. As a result, we haven’t currently cancelled your flight, but we do understand that you might be thinking about whether or not to travel.’

Customers have a short window of a few days to accept the deal – or risk losing everything if the flight goes ahead as planned.

Francesca Spiegel accepted the voucher and was furious when she received an email the next day confirming that her flight to Lisbon had been cancelled.

She told Which? Travel: ‘I was told I can’t get a refund because I had a voucher and now the case is closed. I’m not impressed at all by its customer service. I’d rather have our money back as at the moment everything is so uncertain.’

Kat Martineau felt she had ‘no real option’ but to exchange her flight for a voucher when she was contacted by easyJet. Greece wasn’t allowing UK visitors at the time, meaning she would have had to quarantine at her destination.

Still, she was worried about the ‘small possibility’ that her flight would go ahead and she would lose her money altogether.

She said: ‘Surely easyJet must have known they were highly likely to cancel the flight when they offered the vouchers?’

John received notification that his flight was cancelled a few days after accepting the voucher. He claims he was met with a ‘blank wall’ when he tried to chase his flight credit.

‘I can’t describe how I feel at losing the £264 I paid,’ he said. ‘I have no confidence that easyJet will send me a voucher and feel like I have been burgled.’ 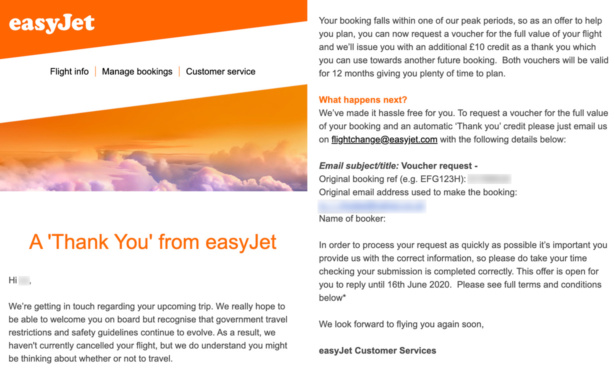 Many of the vouchers can’t be redeemed online. Instead, customers are forced to contact the airline’s busy call centre to book. Some are spending hours on hold because of staff shortages and the sheer volume of enquiries being handled.

Usually, easyJet charges a £15 admin fee to book by phone. However the low-cost airline has confirmed that this would not apply to voucher holders.

It also claims it is working on ways to make the vouchers redeemable online going forward.

A spokesperson for easyJet acknowledged ‘customers’ frustration’ over the timing of the email.

They added: ‘At the time this offer was sent, there was continued uncertainty over these flights operating this summer. We knew some customers would want certainty around their plans and so offered them the option to receive a flight voucher for the full value of their booking along with an extra £10 voucher for a future booking, as a thank you for choosing to fly with us again.’

The airline has since refunded some affected customers as a ‘goodwill gesture’. If you receive notification that your flight has been cancelled a day or two after accepting the voucher, call easyJet and ask for your money back. While there are no guarantees, we have heard several success stories from customers.