As of 1 September, Ocado will start delivering M&S groceries to shoppers after ending its almost 20-year partnership with Waitrose. Some people are excited at the prospect of getting M&S goodies delivered with their usual Ocado shop, but will the switch leave you out of pocket?

We checked the prices of 30 grocery and household items on Ocado.com and found that shoppers would spend £2.74 less on M&S-branded items than they would for equivalent Waitrose-branded products.

Here, Which? explores the price differences in more detail and reveal what’s next for M&S and Waitrose.

How do M&S and Waitrose products compare on Ocado?

Currently, both M&S and Waitrose products are listed on Ocado, with Waitrose products available for delivery until 31 August, and M&S goods available from 1 September. This enabled us to compare prices for equivalent products, including penne pasta, chopped tomatoes, bananas and kitchen roll between the two upmarket supermarkets.

The biggest difference in price we found was for a 550g block of British medium cheddar cheese. The Waitrose essential version costs £4, while the M&S block is £2.75.

A two-pint bottle of M&S semi-skimmed milk was 4p cheaper, while buying a litre of M&S olive oil would save you 65p on the Waitrose version.

M&S has claimed that it will match or beat the price of all Waitrose-branded items sold via Ocado, but we found that this isn’t yet the case across the board. For example, an M&S-branded 750ml bottle of toilet-cleaning gel will cost you 15p more than the Waitrose equivalent.

In the table below, we reveal 10 of the products from our analysis that differed in price between the two supermarket brands on Ocado. If the cost is lower for the M&S-branded item, the price difference is highlighted in green. Those in red mean the Waitrose price was lower.

Will these price differences be enough to affect Ocado’s ranking in our monthly supermarket price comparison? We’ll check throughout September and share the results soon.

M&S isn’t typically thought of as the place to do a large weekly shop, but it has been working to change this. Last year, it launched a campaign claiming to offer ‘remarksable’ value on everyday items and it has spent the past 18 months lowering prices.

In a recent article for trade title The Grocer, M&S Food’s managing director, Stuart Machin, said that ‘while we’re not interested in a race to the bottom, we are very serious about busting the myths around M&S pricing’.

The high-end supermarket is now attempting to show customers that M&S own-brand staples such as bread, milk and cheese, are cheaper than they might think.

It has increased the range of pack sizes available for shoppers, including adding 1kg bags of potatoes, 450g packs of vegetables and 750g blocks of cheese, in an attempt to appeal to families doing a big weekly shop.

M&S has also added 750 new products to its existing range, including more baking ingredients and frozen meat, fruit and vegetables. In total, M&S plans to list 6,000 items for sale on Ocado, including clothes and homeware, compared with the 4,000 Waitrose-branded products previously sold.

You can’t buy M&S groceries from the M&S website, so Ocado – of which M&S now owns a 50% share – will be the only way to get hold of M&S food and drink other than in store.

What next for Waitrose?

In advance of its exit from Ocado, Waitrose has launched a new campaign to ‘bring home Ocado shoppers to Waitrose.com’. 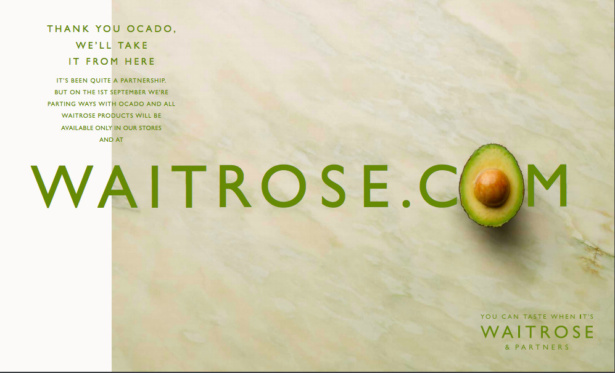 Reportedly on track to treble in size and become a £1bn business in its own right by the end of the year, Waitrose.com has already invested millions of pounds in preparation for the split from Ocado, including setting up a new ‘food innovation centre’ and distribution centres.

The supermarket has focused on retaining and reformulating customers’ favourite products, as well as developing thousands of new ones in a bid to tempt Waitrose fans to make the switch.

And shoppers may swap from Ocado to Waitrose online for another reason: home delivery is always free (although the minimum £60 spend may be too steep for some). Ocado, which requires a minimum order value of £40, has varying delivery fees between £0 and £6.99 depending on the day and time of your order.

This article was amended on 27 August to correct an error in our table, where the price of fish fingers had been entered the wrong way around for each retailer, and on 1 September to clarify minimum spend and delivery charges.