It’s easy to be seduced by the on-paper benefits of a battery electric car (EV). Aside from the massive positive step of removing local emissions from your daily drive, the potential for very low running costs, as well as tax exemption (at least for the time being), stack the case against investing in a new petrol or diesel model.

But aside from the obvious drawbacks of charging times and limited (though improving) driving range, is there anything you need to consider before taking the plunge and committing to an EV?

To find out, I spent a week living with one as my only vehicle. This is something I approached with trepidation, given my need to often do long journeys on short notice, plus my rural location – which is free of street lights, let alone EV charging facilities.

Our independent lab and road tests reveal the best electric cars for 2021.

How much does the Volkswagen ID.3 cost? 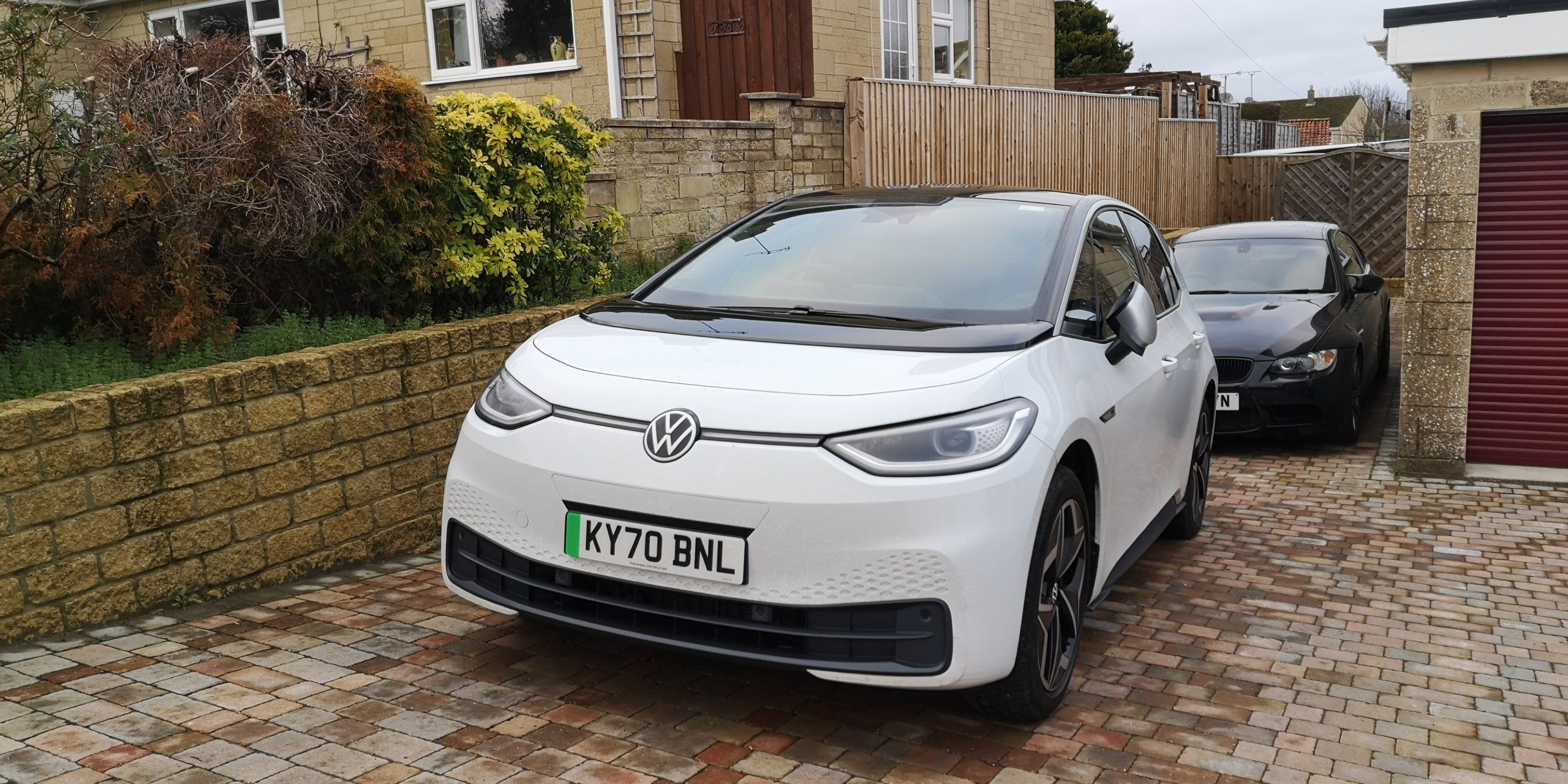 The Volkswagen ID.3 starts from £29,990 (inclusive of the current plug-in car grant). It’s slightly more expensive than the Nissan Leaf, which kicks-off from £26,845, but boasts over 50hp more. The ID.3 also has a larger 58kWh battery, compared to the Nissan’s 40kWH unit.

The ID.3’s price is higher than the traditional combustion VW Golf, which starts from just under £22,000. But it’s more powerful (higher performance GTI and R models aside), and comes with a decent array of equipment.

Volkswagen’s new ID.3 is perhaps the ideal model with which to embark on this journey of discovery. Taking the reins from the now discontinued e-Golf, this mid-sized EV hatchback is still something of a rare breed, with most manufacturers (aside from Nissan with its Leaf) focusing their battery-powered efforts either at entry-level small cars or range-topping luxury SUVs.

First impressions were positive – once VW’s slightly stressed-looking delivery driver arrived. He’d been waylaid by having to find a working and unoccupied charging point. This task had added over an hour to his planned arrival time, and was something of an omen for what lay ahead.

The ID.3 really does look the part – subtly futuristic, yet comfortingly familiar thanks to its five-door layout and logically arranged dashboard. Large doors and a conveniently high seating position make it a doddle to hop in and out of, too.

Getting out on the road, this familiarity continues. The ride is comfortable and supple, just like the ubiquitous VW Golf. There’s an airy feel and plenty of space, front and back.

Where it differs is in its instant acceleration. Not even the sportiest models in the Golf range can match the ID.3 for its off-the-line acceleration. 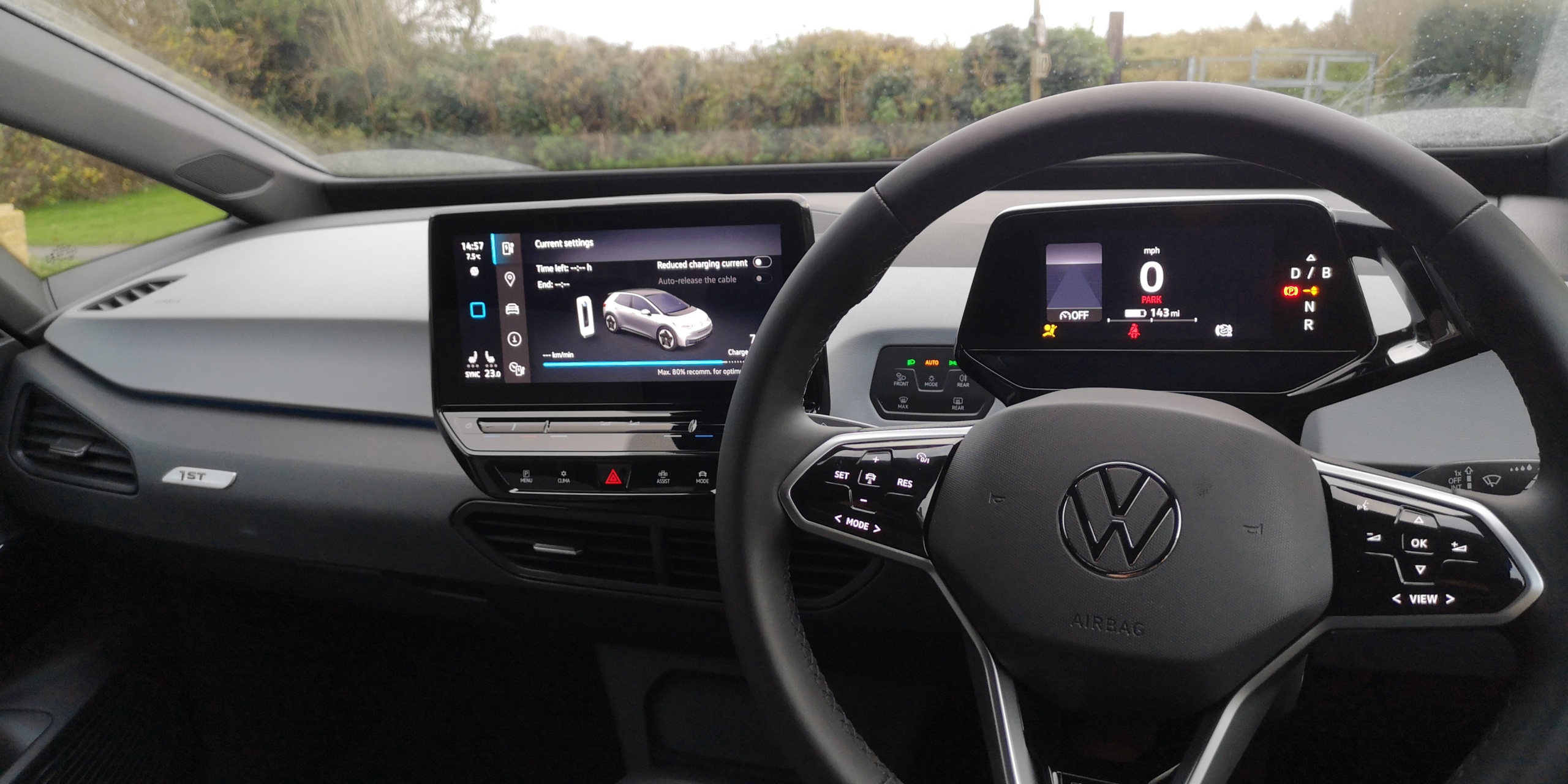 What was slightly concerning was a projected range of 143 miles from the 78% battery charge that remained. This seemed at odds with the ID.3’s claimed max range of 260 miles (read our full Volkswagen ID.3 review to find out what it managed in our independent lab tests, which are more realistic than the official tests), but was probably due to the cold weather.

No matter, it comes supplied with both a fast-charging cable and one designed to plug into a three-pin domestic socket. Being forced to use the latter, I was informed by the car’s display that range would be replenished at a rate of just two miles every hour.

Thankfully there was sufficient time to charge the car before my 220 mile journey the following day; a road trip that I hoped would test the limits of the claimed range and provide some insight into its capabilities outside of the realm of the ‘average daily commute’ that EV makers are so fond of banging on about.

It’s amazing just how much journey planning you end up doing when getting stranded isn’t solved by a hastily purchased Jerry can. I’d signed up to no less than three different public charging providers, to ensure I had the correct app wherever the battery might run low.

This proved worthwhile. While sat in the frosty winter air, the ID.3 was telling it me it had 184 miles to give, despite the battery now being full. This could be down to a number of factors, from the ambient temperature to the on-board computer adjusting for the previous custodian’s style of driving – we’ve approached Volkswagen for comment and will update this article when we hear back.

Still, at least the car’s near instant heat delivery meant that I could defrost the windows and warm the cabin in a fraction of the time it usually takes me in my own car. And all without a hint of a cold-start clatter and swirling exhaust fumes.

Concerned about your car’s environmental impact? Use our free low emission checker to find out what emissions are produced by every car we’ve tested – low emissions cars. 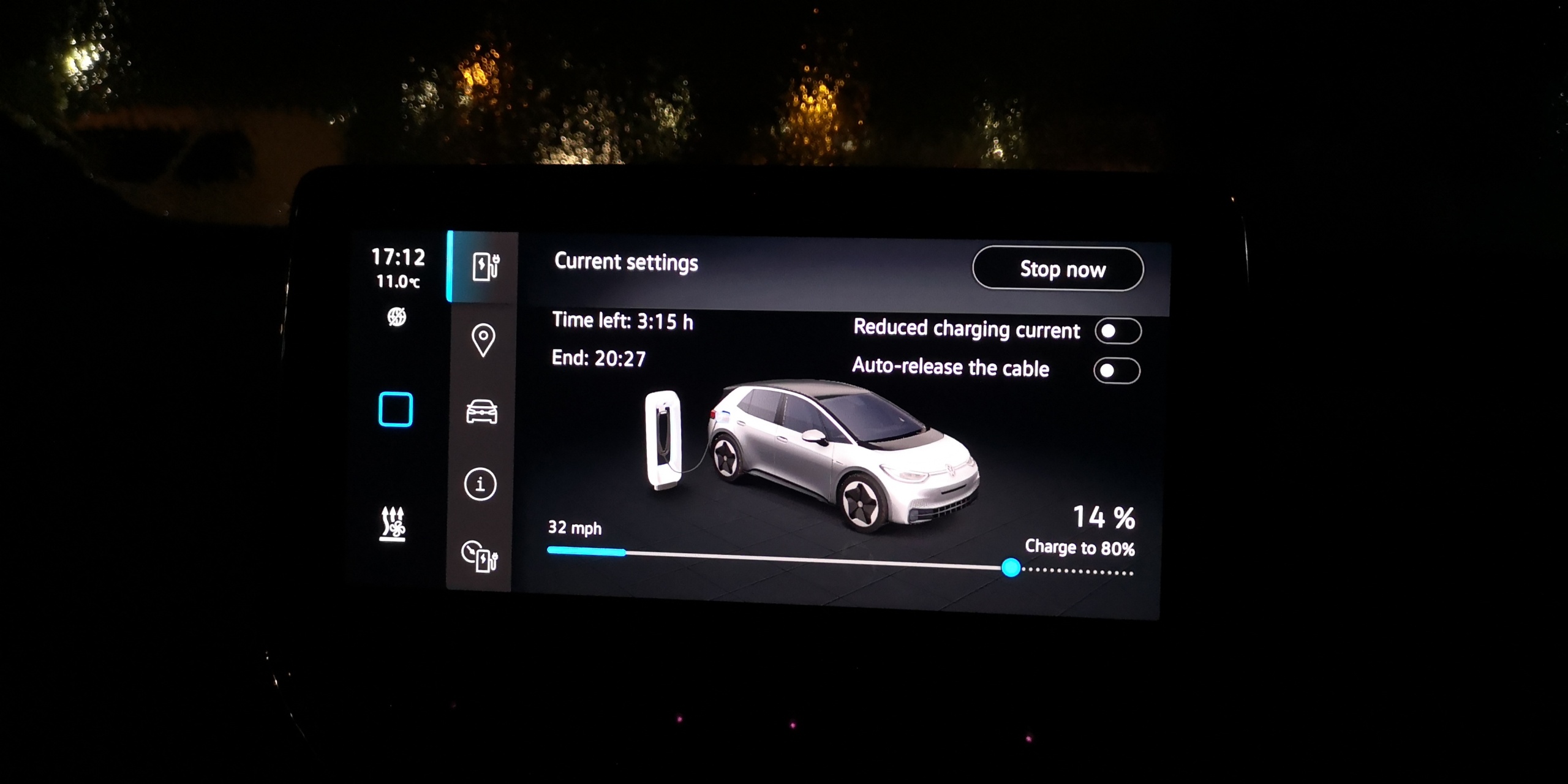 Faster roads are the Achilles heel of electric car range, and the ID.3 is no exception. The estimated range dropped sharply at motorway speeds; suddenly making me conscious of my throttle inputs every time I had to accelerate to overtake.

Arriving at my destination 111 miles later, the ID.3 had just 31 miles left in the tank, forcing me to find a charging point earlier than envisaged. No matter, the handy Zap Map app informed me there was a Shell rapid charging point nearby, though other app users had commented that it was being hogged by a local Tesla driver much of the time.

And lo, upon arriving at the pump, not only is there a Tesla Model S occupying one outlet, but a woeful parking job by its owner has left the unoccupied outlet inaccessible. With the ID.3’s range quickly plummeting, I tried two more local charging points – both were out of order.

Now I was faced with a dilemma. I couldn’t make it to my next local destination without running the battery flat, so was forced to return to the nearest motorway services, where I prayed the rapid charging station would be working. 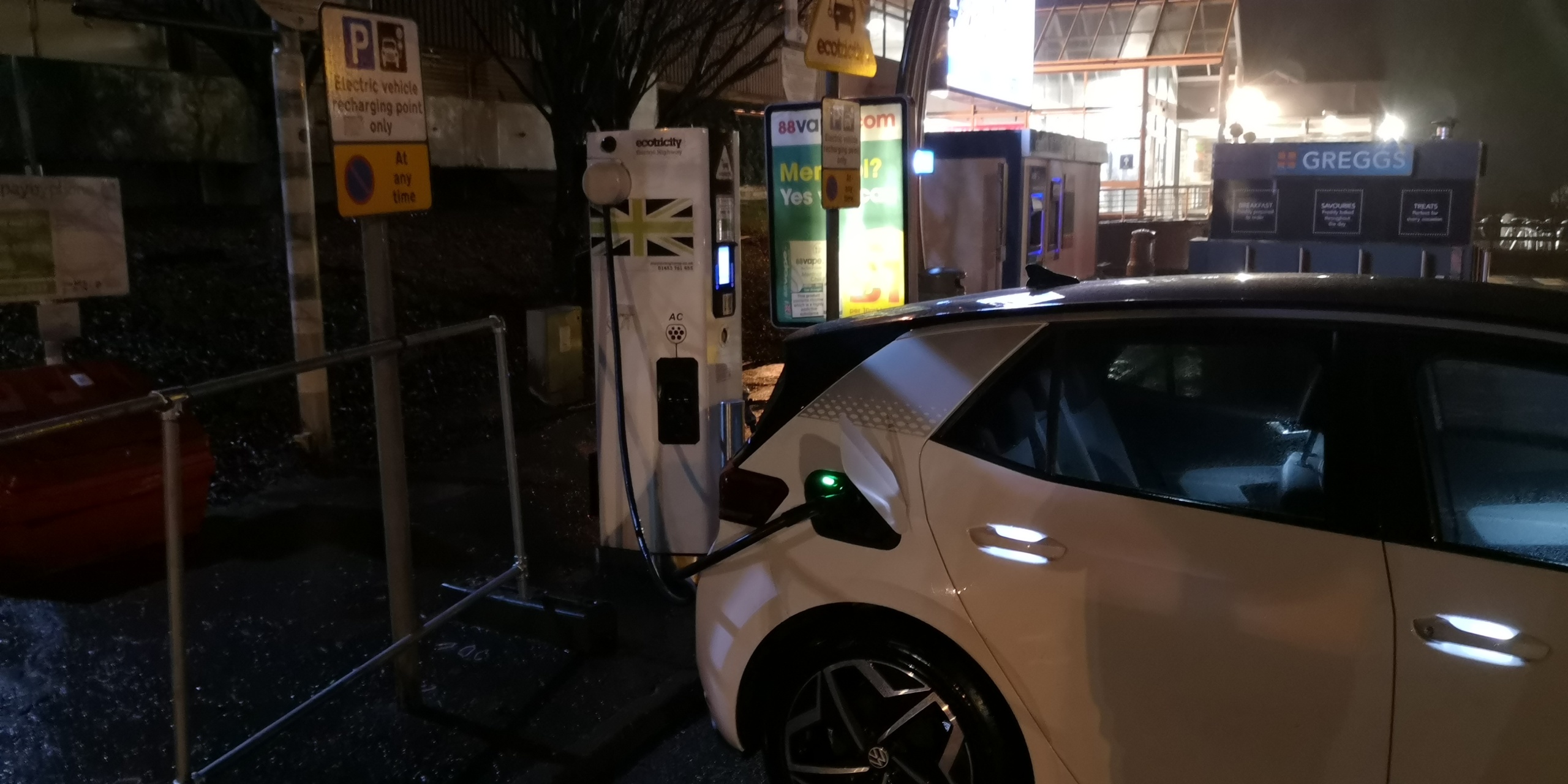 Thankfully, it was. Though upon plugging in the supposed 43kWh charger, the ID.3 informed me it would take over three hours to charge the battery to 80% capacity. Its ‘Type 2’ connection (the same used on domestic fast chargers) meant the ID.3 could only charge at a maximum of 11kWh, meaning I would only get 20 miles of range in the 45-minute charging period allowed at this particular charging point.

This frustrating saga meant my plans were now totally in disarray, and I was faced with the prospect of nursing the ID.3 home between motorway charge points – an agonising prospect of many hours charging, despite it being a relatively short 110 miles.

Now with little over 40 miles of range, I couldn’t afford any losses if I was to make it to the next charger, 47 miles away. What followed was the most anxiety-ridden hour of driving I’d ever experienced, as I stroked the ID.3 along at 45mph on a rain-sodden M5, praying the battery would hold out and I’d make it without being rear-ended by an inattentive HGV driver.

Arriving at the charger with a not-at-all Hollywood style zero miles left on the battery, it was thankfully working, and was a proper 50kWh ‘CCS’ rapid charging unit. This left me with a rather more healthy 145 miles after my 45 minute window.

This was enough to get the remaining 70 or so miles home, but not without eating through 125 miles of range. I arrived exhausted.

Find out more about how to charge an electric car. 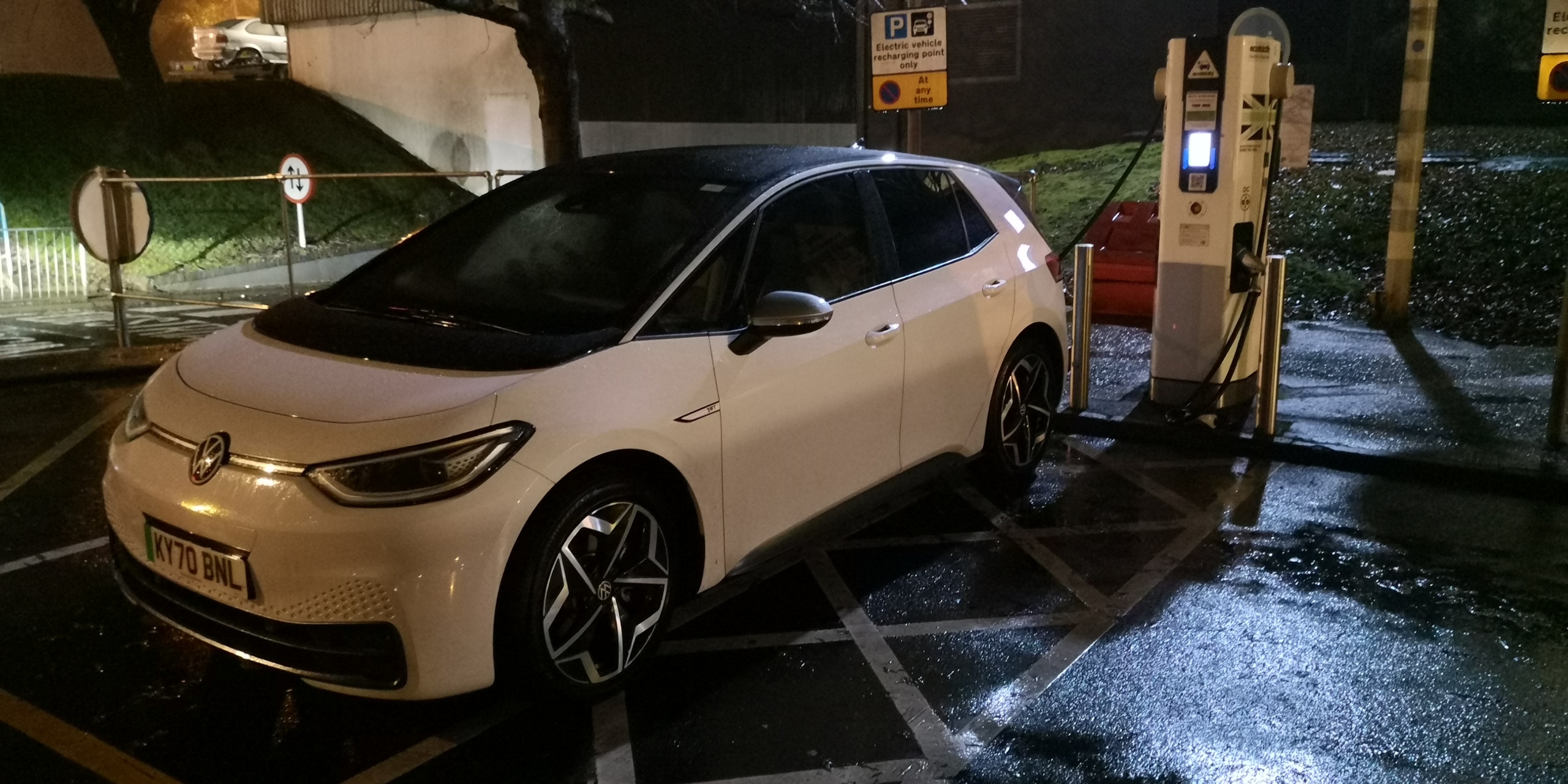 The experience took the shine off of what was otherwise one of the best cars I’d driven in the past year, and for the rest of my time with it the ID.3 was limited to local outings.

This current lack of flexibility with EVs is exacerbated further if you don’t have access to a home charger, and is more of a sticking point for myself than I’d initially appreciated. You can plan your journey as meticulously as you like, but a single faulty charger, or sudden drop in range, can throw a huge spanner in the works.

This means you can’t rely on an electric car for long journeys as you would an internal combustion car. While it’s true that most drivers won’t need more range than what the ID.3 offers on a daily basis, for many it doesn’t have the drop-of-a-hat convenience that a car should be all about – something that will drastically need to change if we’re to all make the switch to electric by 2035.

Want to reduce your running costs but not sure if an electric car is right for you? See our expert pick of the best hybrid cars for 2021. 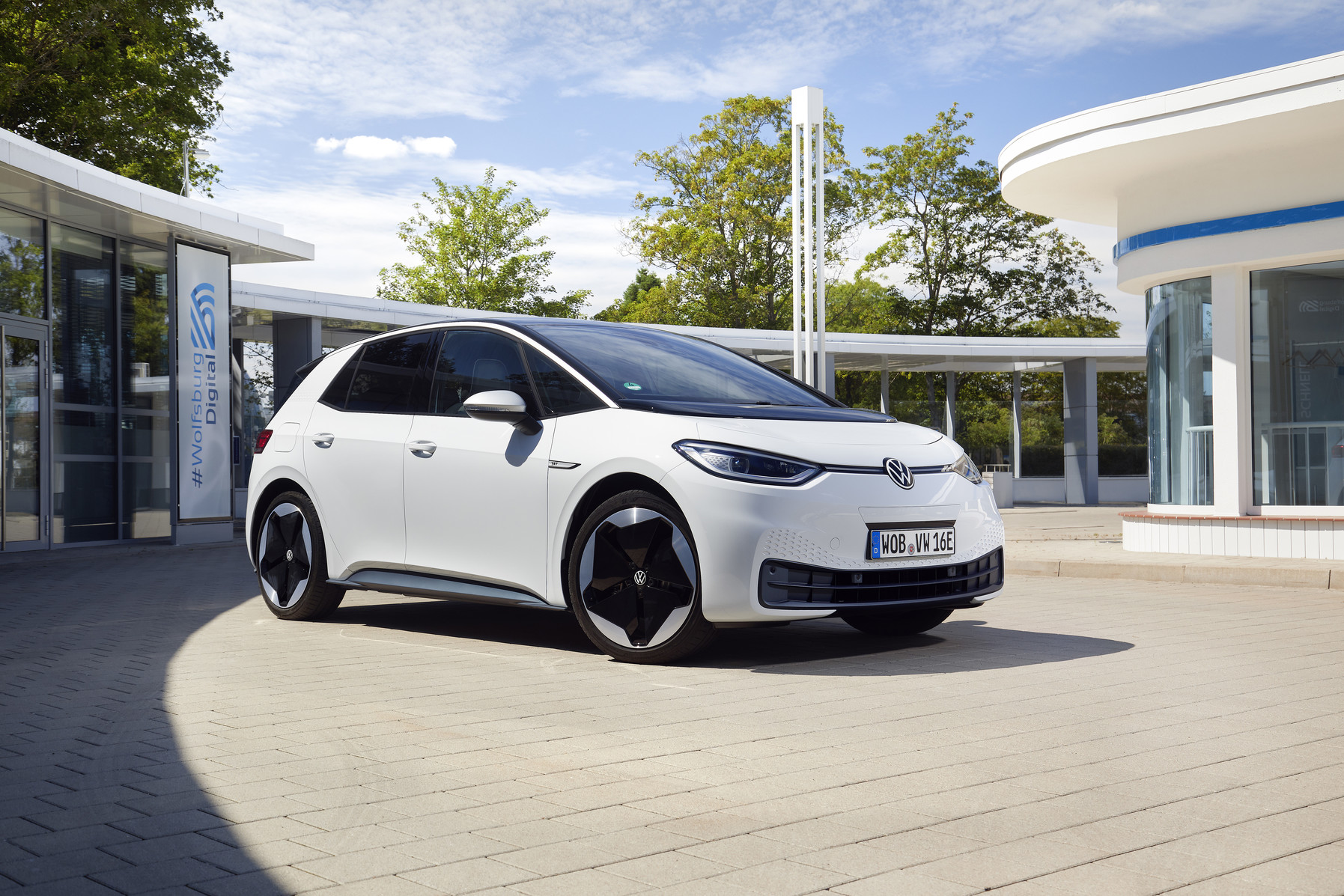 See our expert Volkswagen ID.3 review to find out how this car performed in our tough independent tests.