We’re a week into 2021, which is more than enough time for two of the UK’s biggest TV brands – Samsung and Sony – to tease us with insights into their new ranges ahead of their launch in the spring and summer.

For Sony, 2021 is all about cognitive intelligence, with its new Bravia XR processor and range of TVs. Meanwhile, as Samsung debuted its Neo QLED TVs, it focused on accessibility and sustainability – with a smattering of picture quality thrown in, too, of course.

We won’t see these TV ranges in stores for a few months and we’re still weeks away from any pricing info, but there’s certainly some intriguing potential.

If you can’t wait till then for a new TV, we tested some stunning models last year; check out our favourite 4K TVs from 2020.

New year, new processor for Sony and its high-end sets. Two new OLED ranges and three LCD ones will be powered by the Bravia XR processor, which brings a significant new feature: cognitive intelligence.

Cognitive intelligence is a fancy way of saying the TV learns and behaves a bit more like a person. Don’t worry, the five new ranges aren’t anthropomorphic; your TV won’t suddenly start acting like HAL 9000 and trying to engage you in conversation. It’s more that the TVs understand what people focus on when they’re watching, and make those portions of the screen look as good as possible.

Sony showed us how multiple streams of data are analysed and cross-analysed to determine which parts of the picture are deserving of this special attention. We look forward to seeing what difference cognitive intelligence makes when we test these new TVs later this year.

Sony’s XR ranges will be the first TVs to use the Google TV operating system. It has some neat new benefits that we discovered when we tested the Chromecast with Google TV, including the ‘for you’ section that recommends content based on what you’ve been watching.

The recommendations come from any apps you’ve installed, so if you’ve got multiple subscriptions you’ll get potential picks from all of them.

Not only does the XR range get a new processor, a new operating system and a few other new features (see below), TVs even get their own streaming service.

Bravia Core will have a range of new films, which should appear on the service soon after they leave the cinema. These will cost money to rent, but anyone who buys a Z9J or A90J gets 10 credits, while owners of the A80J, X95J and X90J get five credits. Each credit is worth one film rental.

In a nutshell: other key features of Sony’s five new ranges

Read more about Sony TVs, including the technology in them and details on the models from 2020 in our guide to buying the best Sony TV

Samsung builds on its QLED range with Neo QLED

Samsung announced the biggest advancement to QLED technology in years, potentially bringing its flagship 4K range closer to OLED than ever before.

The LEDs that make up the displays powered by the new technology are miniscule – just 1/40th the height of the LEDs in previous QLED displays. This means Samsung can pack far more of them into the display, and more tightly control colour and light dispersal.

The result should be crisp colours that don’t bloom out into darker regions of the screen. Two of Samsung’s new ranges will have this technology: the 8K QN900A and 4K QN90A.

A trickier feature to understand was the 16 neural networks made possible by the new Neo Quantum Processor. The aim of these 16 networks is to improve upscaling, since each one focuses on a specific facet of what you’re watching and improves that portion of the image independently.

This will be particularly important for the 8K QN900A. Since there’s still very little 8K content to watch, this TV will live and die on how effectively it can make SD, HD and 4K content look like 8K.

We say mass-market, but for now Samsung’s Micro LED TVs will only be available in 90 and 110-inch screen sizes, which will be too gargantuan for many living rooms. Smaller models are coming later in the year, though, and based on a sneaky look at the boxes in the presentation, it looks like they could get as small as 70 inches this year.

Take a look at our guide on what size TV to buy to work out if this could be a good fit for your home.

It’s been three years since Samsung debuted its Micro LED tech using a colossal TV dubbed ‘The Wall’. While the underlying tech doesn’t seem to have changed, it still seems impressive. The LEDs, which are smaller than a strand of hair, pack the screen. Just like an OLED display, the LEDs emit their own light, so there’s no need for a backlight and contrast levels should be tremendous.

Another fascinating aspect of these TVs is the 4Vue technology, which can effectively split the screen into up to four smaller screens, each one controlled by a different input.

If you wanted, you could have a games console on one, a Blu-ray on another, streaming on another and a broadcast channel on another. All four screens have independently controlled volumes. While this could be handy to avoid household fights over what to watch, we hope there’s also support for multiple headphones, or else it could be quite the cacophony. 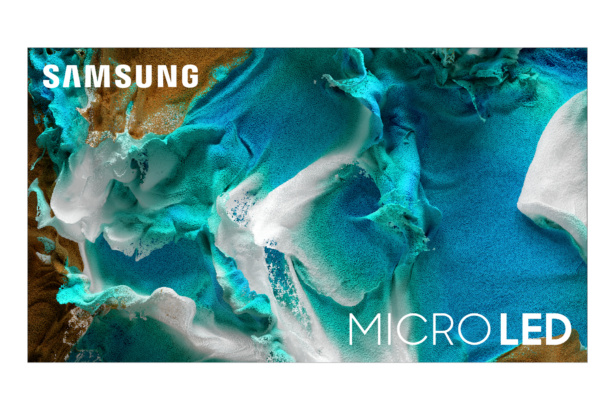 One of the most unexpected parts of Samsung’s digital press conference was its new remote.

The Solar Cell Remote has a rechargeable battery that gets its juice from light; it can be charged with indoor as well as outdoor light. Taking into account the sales volumes of Samsung TVs, and assuming owners keep them for around seven years (which matches up with our own TV lifespan data), Samsung reckons adding rechargeable batteries saves the equivalent of 99 million standard ones.

Samsung has already won awards from the RNIB (Royal National Institute of Blind People) for the accessibility features on its TVs and it’s adding more in 2021.

These include captions moving so they don’t block other text sources on screen and sign-language zoom where users can increase the size of an interpreter by up to 200%.

Samsung’s 2020 range will stay on sale for a few more months yet and there are some incredible models in there. Read more about them and the technology powering them in our guide to buying the best Samsung TV

Pricing and availability for new Samsung and Sony ranges

Sony told us Brexit wasn’t impacting its release timeline, which is a good sign, and we expect to see its Bravia XR ranges launch in the spring.

The 8K ranges and flagship 4K ranges are likely to come first, with smaller, cheaper models coming later. Sony tends to release its TVs first and we’d expect to see a few models from it and Samsung around April.

The cost will be steep at launch, but our research has found that it only takes around a month or two for those prices to start dropping.

Want to be ready to buy when TV manufacturers’ 2021 ranges hit the shops? Read our expert advice on how to buy the best TV for a round up of the key things you need to know